The Free Market is a Lie!

“Another successful effort by the Obama administration that boosts the bottom line for farmers!”

Those are the words Agriculture Secretary Tom Vilsack spit out to reporters after news hit that Japan was ready to ease restrictions on beef imports from the United States.

I tell ya, these guys turn everything into a cheerleading routine for the president as soon as they see an opportunity...

Of course, what Vilsack fails to mention is that this is really only good news for the big dog agriculture lobbyists who regularly roam the halls of Congress.

You see, despite the images they try to create in their press releases, it's not the local family farmer who's going to benefit from this deal; it's the operators of those highly-destructive concentrated animal feeding operations (CAFO) that'll be on the receiving end of this hundred-million-dollar score.

That's right — the heavily-subsidized industrial farming industry wins big here, while U.S. citizens now get to dance in even more of the toxic slop these operations produce.

Polluted water and infectious disease outbreaks are the gifts that keeps on giving.

So where are the tree-hugging Obama supporters today? Anyone? Anyone?

Meanwhile, your tax dollars keep getting funneled into these operations. But rest assured, you won't be sharing in the riches of this new deal with Japan. 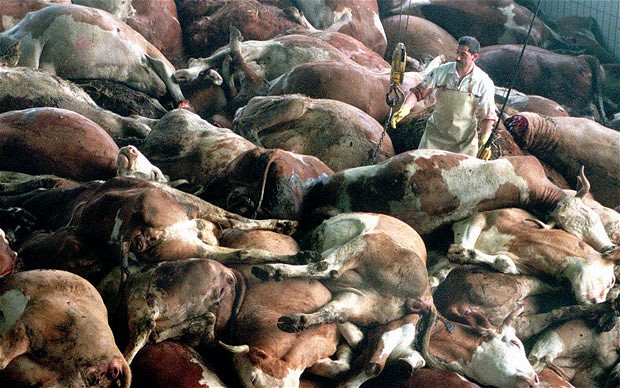 According to the Union of Concerned Scientists, taxpayers pony up about $7 billion a year to subsidize or clean up after these CAFOs, and that doesn't include another $4.1 billion that's been spent over the years to control leaking manure storage facilities.

And let's not forget the reason Japan put the kibosh on U.S. beef imports to begin with was because of fears over bovine spongiform encephalopathy, better known as mad cow disease.

If you want to trace the origins of mad cow, look no further than the CAFOs that fed their cows rendered cattle and chicken feces. They basically turned their herbivores into carnivores, and the result was catastrophic from both a public health and economic perspective.

But that's just the tip of the iceberg...

A Steady Diet of Subsidies

According to a study published by researchers at Purdue University, there are now concerns that manure generated by CAFOs could result in infectious disease outbreaks in surrounding communities. And let me remind you again: Your tax dollars keep these operations humming, even as they increase output to meet heightened demand in other parts of the world.

This, my friends, is why I only buy my meat from local farmers who treat their cows with respect, and allow them to eat what God intended them to eat — grass!

Sure, it costs me a few more bucks. Because unlike those big industrial farms, these local farmers don't get to feed from the government teat. They don't have access to those billion-dollar subsidies, so they have to endure the real cost of production. Imagine that!

Still, it's worth it. The meat tastes much better, and it's loaded with more of the vitamins and minerals you can't get from those industrially-produced cows...

Numerous studies (not funded by Big Ag) have shown grass-fed beef is:

Yes, when you allow cows to be cows — and not secluded, cannibalistic, soulless widgets — you are rewarded with nutritionally superior sustenance.

Of course, not all cows shoved into CAFOs are forced to eat meat. Many are fed a steady diet of corn and soy  which (surprise, surprise) is nearly all sourced from other industrial farms that also land billions in taxpayer subsidies every single year.

Folks, how long are we expected to shell out our hard-earned money to these industrial agriculture giants?

The way I see it, if you can't operate competitively without my tax dollars, then your business model is inferior.

In a REAL free market, one must ask, shouldn't healthy competition dictate which farms prosper and which farms fail?

Of course, to assume we have a free market when it comes to farming is naïve...

Here's the bottom line: While Obama's yes-man over at the Department of Agriculture is busy rewarding his boss for getting Japan to buy more U.S. meat, the hard-working family farmer that doesn't receive those fat subsidy checks from the government is living honorably and producing quality food for Americans. 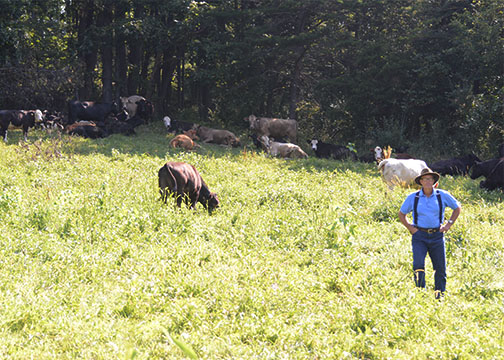 He is the one that should be congratulated for maintaining a sense of normalcy and responsibility to food production.

And he's the one that should be supported by those who have had enough of government interference in what's supposed to be a free market economy.

To drive this point home, I leave you with this quote from libertarian organic farmer, Joel Salatin, regarding the price of what he calls “clean food.”

... Whenever I hear people say clean food is expensive, I tell them it's actually the cheapest food you can buy. That always gets their attention. Then I explain that with our food, all of the costs are figured into the prices. Society is not bearing the cost of water pollution, of antibiotic resistance, of food-borne illnesses, of crop subsidies, of subsidized oil and water — of all the hidden costs to the environment and the taxpayer that makes cheap food seem cheap. No thinking person will tell you they don't care about all that. I tell them the choice is simple: You can buy honestly priced food or you can buy irresponsibly priced food.

P.S. If you're looking for a local, responsible farmer in your neck of the woods, check out a website called eatwild.com. The folks over at Eatwild provide a comprehensive directory of responsible farmers around the country.