Yesterday was the real holiday here in the States: Thanksgiving.

And if you were getting this yesterday, it would be all about the financial side of turkey and stuffing.

But it’s the day after Thanksgiving, and that’s kind of an unofficial holiday here.

It’s Black Friday (thusly named because that’s the color of your eyes after getting into a fight over the last Tickle Me Elmo with someone’s grandmother).

Of course, I’m kidding about the reason for the name. I’ll get into more detail on that later. It’s got a lot to do with how much people spend at stores on that day.

You see, Americans spend billions of dollars each year on Black Friday, trying to take advantage of all the super sales going on.

This year, however, one company has plans to give billions of dollars back to shoppers, even if they don’t buy a single thing!

But before I get into that, let’s see some of the history and statistics that make Black Friday the greatest retail revenue bonanza of the year and provide the billions this particular retailer is giving back this year…

How It All Started…

Now, before it had to do with shopping, there was a “Black Friday” in the stock market. It was back in 1869 when speculators tried and failed to corner the gold market and sank the stock market as a result.

But when it comes to the post-Thanksgiving excitement, the term "Black Friday" originated in Philadelphia in the 1960s…

In the early 1960s, Philadelphia police complained about the congested streets, packed with motorists and pedestrians heading to the Army-Navy football game and looking for deals post-Thanksgiving.

They called it “Black Friday.”

And while Philly's biggest department stores tried to steer away from the negative name and call it “Big Friday,” the rebranding didn’t stick.

But Black Friday has been a big sales day for department stores dating all the way back to the first Macy’s Thanksgiving Day Parade in 1924.

Ever since then, the Friday after Thanksgiving has been known as the unofficial start to a bustling holiday shopping season.

And while the name started as a complaint police had about all the traffic, many people look at it from an accounting standpoint.

“Black” refers to stores moving from the “red” to the “black.” It came from back when accounting records were kept by hand and red ink indicated a loss and black a profit.

And as retailers began to realize they could draw big crowds by discounting prices, Black Friday became the day to shop.

Traditionally, many retailers would open up the afternoon of Thanksgiving to hordes of people waiting anxiously outside the windows.

The pandemic in 2020 put a slight crimp in things, as many people were still afraid of crowds and instead relied on online shopping.

But last year, a whopping 66.5 MILLION people headed to stores to shop for bargains…

Black Friday is back!

If you include those shopping online, that number jumped to 155 million Americans shopping for deals.

And those people are spending money out there (and online)...

Businesses make hundreds of billions over the Thanksgiving weekend: 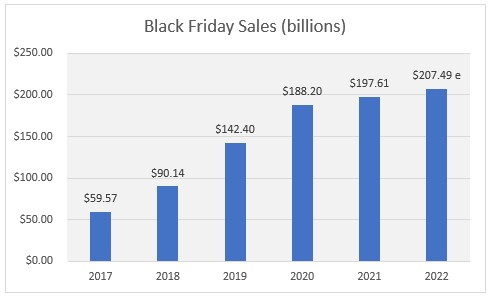 And of that nearly $10 billion worth of online sales, Amazon captured about a quarter.

So using some simple math, that means Amazon makes about $2.5 BILLION from Black Friday sales.

That’s about 7% of the overall Black Friday shopping haul (and it's getting bigger every year).

Not too bad, Amazon. Well played.

You see, Amazon is the retailer I hinted at earlier when I said that one was planning on giving back billions of dollars even as shoppers shell out billions on its platform.

It’s going to give back some of those bucks people are paying out for the deals they’re finding all over the Amazon marketplace.

And you don’t even have to do any shopping on Amazon to get the bonus!

All you have to do is let them know you want some of the cash (and exactly how much of it you want).

Then you’ll be eligible to get your share of a multibillion-dollar payout Amazon’s going to make next month.

It’s that simple. You sign up for the payment. You tell them how much you want to receive.

And you’ll get a share of what’s adding up to be nearly $3 BILLION in cash Amazon is basically giving away this year.

I’ve put all the details you’ll need and the instructions you’ll want to follow into a presentation to make it as easy as possible for you to sign up.

So take a little time today between Black Friday deals to learn all about it and get yourself set up to collect the cash.

I also have a report with all the same information (in case you forgot to bring those headphones with you). You can read it while you’re waiting in line for the next sale to open.

However you get the information, just promise me you’ll get it sooner rather than later.

The payment is coming early next month whether you’re on the list or not.

I’d sure prefer if you were getting a share. I think you would too.