Augmented Reality: The Future Is Here

The future is here, and it’s augmented reality.

Augmented reality, commonly known as AR, came into the spotlight last year when the popular app game Pokémon Go brought the concept into the hands of many nostalgic 20- to 30-year-olds.

Also last year, another popular app, Snapchat, did the same thing. Snap, Inc. developed a new AR feature within its app that was another way to send your friends funny pictures or videos.

This began a whole new outlook for AR and set a precedent for how tech companies introduce it into their own products. The opportunities in AR and the groundbreaking products it could create for companies and consumers alike became a lot more obvious.

What exactly is augmented reality? Well, it’s a live direct or indirect view of a physical, real-world environment that has its elements “augmented” by computer-generated or extracted real-world sensory input such as sound, video, graphics, haptics, or GPS data. Take a look at the picture below... 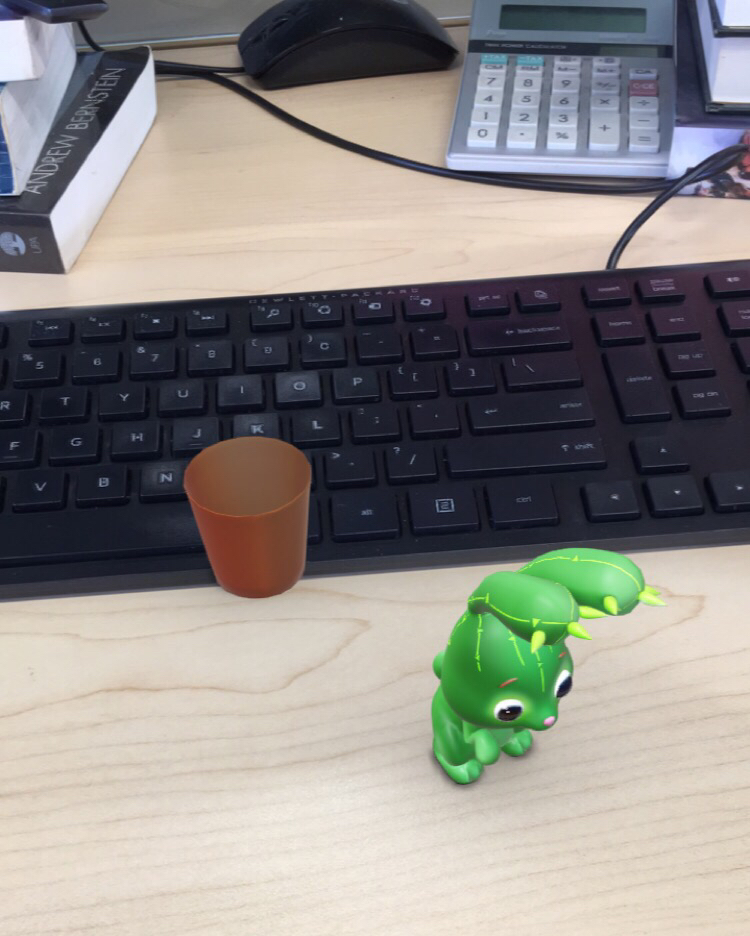 This is just one example of augmented reality. I took this picture while using the Snapchat app. This is a picture of my desk, and thanks to the app’s AR features, I have the capability of adding a computer-generated element to what would normally be just a boring picture or video of my desk and keyboard.

As you can see, the app added a cartoon cactus bunny jumping out of its flowerpot. Of course, it's hard to fully show you how this cartoon is interacting with its real-life surroundings, but believe me, it is.

What we see as the real world now has the capability of being altered and heightened.

And it’s not just a matter of placing an item into what we see as “real.” Sure, that looks cool, but how does it really benefit us? We’ve become such a hands-on and interactive society that we want technology to enhance and help us perform our normal, everyday tasks, and that’s exactly what AR aims to do.

At least, that’s what some of the biggest tech companies around today hope to do.

When It Comes to AR, Companies Are Jumping In

At the Web Summit technology conference, the vice president of business and operations for virtual reality at Google, Amit Singh, predicted “hundreds of millions” of Android devices will be able to engage in AR uses by the end of 2018.

There will hundreds of millions of phones that will be AR ready. And the current stage is... We are helping developers... build the experiences... So that it becomes a daily habit... and once it does, I suspect the natural evolution of monetization comes through...

Augmented reality [will become] a core feature of most Android over the next few years.

At this year’s ShopTalk Europe, an event that organizes the world’s most innovative and important events for retail and ecommerce, Greg Jones, director of VR and AR at Google, said, “At some point, we’re going to look back and think, how did we not have a digital layer on the physical world.”

AR is the obvious next step toward effortlessly intertwining our lives with technology.

Recent insight from Google indicated that 34% of its users said they would use AR while shopping, and 61% said they would prefer to shop at stores that offer AR. Jones added, “AR is set to reconnect physical and digital retail.”

AR could be the answer to breathing life back into the retail industry. The retail stores that begin investing in the technology could see the growth they so desperately need.

And Google isn’t the only company increasing its traction in the AR realm.

A Leak from Apple…

Apple is working on a secret device. Employees from Apple have been working on this secret project for some time now. Jason Stutman, an editor here at Wealth Daily, even wrote about it in a recent article.

But now it’s no longer a secret. Last week Bloomberg reported that Apple has been perfecting and developing technology that it will incorporate into an augmented reality headset by 2019, in hopes of having its AR headset in the hands of consumers by 2020.

Apple can’t rely on the iPhone to be its only groundbreaking product. It’s been 10 years since it shook the market, and it’s time for the company to bring something new to the table. What better way to do that than with augmented reality?

Where Is AR Going?

AR is going to be a massive market for tech companies like Google and Apple, but it won’t stop there. The medical, e-commerce, and retail markets will reap the rewards from this new technology and its expanding market.

Like I mentioned earlier, Apple, the company that helped make the smartphone ecosystem what it is today, is very interested in augmented reality. Apple’s CEO Tim Cook continues to speak out about how he’s excited and anticipating augmented reality. During a recent quarterly earnings report, Cook spoke to analysts and said:

[Augmented reality] amplifies human performance instead of isolating humans. It’s a help for humanity, not an isolation kind of thing for humanity.

Apple has launched its ARKit development platform, a platform that allows developers to create AR apps that overlay digital content over the real world through the iPhone’s camera lens.

My colleague Jason Stutman has been closely following Apple’s secret project — so closely that he was able to identify a supplier for Apple’s early AR headset prototypes. Check out his exclusive report to find out for yourself.

The opportunity that lies within augmented reality is very real, and you’ll regret not becoming part of it when you had the chance.

The One Chart Every Virtual Reality Investor Should See
If you haven't invested in virtual reality yet, you are missing out. This one chart proves my point.
Google Joins Apple in the Augmented Reality Race
As Google and Apple battle it out with their augmented reality software kits, these are the stocks expected to benefit.
Project Iris: Apple's Secret Plan to Replace the iPhone
Apple is quietly working on a secret new device, code-named "Project Iris." It's positioned to completely disrupt the consumer electronics market and spark an incredible investment opportunity in the process.
Buffett's Envy: 50% Annual Returns, Guaranteed
Warren Buffett once told investors at an annual shareholder meeting, "...it's a huge structural advantage not to have a lot of money. I think I could make you 50% a year on $1 million. No, I know I could. I guarantee that."