Yesterday I told my readers in Options Trading Pit to take profits in a call option we bought on Friday...

Here was the note:

On Friday we bought Chicago Bridge and Iron (NYSE:CBI) calls based on the quality of the company and its oversold position on the chart.

The stock has since bounced back and we are close to the standard 33% retracement. No one ever went broke taking a profit.

Sweet, simple, and to the point.

There is nothing I like better than making a quick buck off a Wall Street countermove.

The most loved and hated stock on Wall Street is flat, despite weak earnings.

The company sold 37.4 million iPhones this quarter as apposed to 35.1 million last quarter. The problem was they were iPhone 4s and not iPhone 5s. Margins shrank and the market wants to write them off.

“Ultimately, we are more worried about secular gross margin pressures — particularly on the iPhone,” wrote Toni Sacconaghi of Bernstein Research, who cut his price target on the stock to $600 from $725 and predicted that “in the near term, Apple’s stock might continue to be choppy.”

We all make mistakes, and he certainly isn't alone. Twenty-one other brokers cut their price targets. According to Blomberg, they now range from $400 to $880.

The fact that none of them were right shows you just how worthless these price targets are. 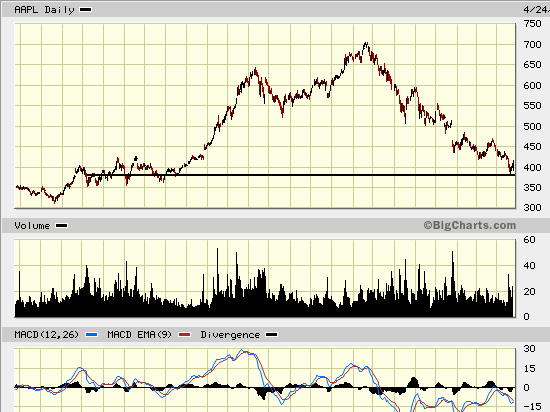 But I got it right.

On March 6 — right here in Wealth Daily — at a time when Apple was at $520 and the Wall Street bots were saying the bottom was in, I told you it was going down...

The big news isn't that Apple saw its first quarterly profit decline in a decade and warned on future growth, or that the herd of analysts talked up their book as their trading desk sold the position...

No, the big deal with Apple this week is that they are going to pay higher dividends.

This is logical because the company has $145 billion in cash.

But that's not the big deal, either.

The big deal is that most of the company's money is overseas.

In order to bring this back to the United States without paying huge taxes, the company is taking on new debt in order to pay shareholders dividends. (As we all know, paying taxes is for the middle class.)

The point of all of this is that after a five-year bull run, the entire market — not just Apple — is getting a bit choppy...

In this type of market, it's a good idea to start sniping 30% gains by trading options.

You could do worse than putting some speculative money in some AAPL October $80 calls. But for my money, it's a crowded trade...

I prefer to play the short-term silver rebound.

Have a good one,