One of the Largest Finds in the World

We could see $147 oil if unrest in Africa and the Gulf cuts investment in output, says the International Energy Agency (IEA).

We could even see $200 a barrel, if Israel attacks Iran.

Iran could unleash small boats laden with explosives "that we don’t have adequate covers for."

If you think it all sounds like a bunch of hooey, think again.

It could all happen in the blink of an eye — and when you least expect it.

It's why we're protecting our portfolios with one of the hottest energy renaissances we've ever seen.

And not in some war-torn, unfriendly hot spot in the Middle East where we bleed for black gold... but right here in America.

No End to the U.S. Energy Boom

We're not talking about the Bakken, the Marcellus, or even Eagle Shale this time — though we are still hearing tales of how thousands of down-on-their-luck Americans are still flocking to North Dakota in search of six-figure salaries, sleeping in their cars because of the housing shortages.

This time, however, it's all about the 1.5 billion barrels of oil uncovered by Anadarko Petroleum (NYSE: APC) at Colorado's Niobrara Shale.

It may just be "among the largest in recent history," according to the company.

“Everything you could possibly want in a play — this has it. It’s great news for us and for Colorado because it’s going to generate a lot of activity and investment for a number of years,” said John Christiansen, an APC spokesman.

Better still, not only will the 1.5 billion-barrel find inject more than $4 billion in annual revenue for the area, it could sharply reduce U.S. dependence on foreign oil even more.

Net petroleum imports, as I've noted in the past, are now at 47% from 60%. That's before taking this new find into consideration.

It's only a matter of time before hordes of unemployed truck drivers, corporate executives, and strippers from Atlantic City begin relocating and booking hotels for weeks on end in the area, just as they have in the Bakken.

Hell, I'm packing a bag to head out there myself, just for a glimpse...

The growth is all thanks to new technologies, namely horizontal drilling and fracturing.

(Check out this video of the technology to see how it works.)

Yes, there are complaints. "Frackophobia" (fear of hydraulic fracturing in natural gas production) does exist, according to The National Journal. Opponents to the process claim fracking fluids seep into local water supplies — which only happens in a handful of the 100,000 natural gas wells drilled each year.

But you can't overlook the technological contribution to U.S. energy. Both are opening a floodgate of oil and natural gas that's been buried in shale for years...

All you have to do is look at North Dakota's Bakken to get an idea of how successful the technology has been.

Production in the North Dakota's Bakken field has just about doubled in two years thanks to this new technology.

Better yet, combined U.S. and Canadian oil output is expected to top 11.5 million barrels a day.

That alone, according to Goldman Sachs, could take the United States from the No. 3 oil producer behind the Saudis and Russians to No. 1 by 2017. 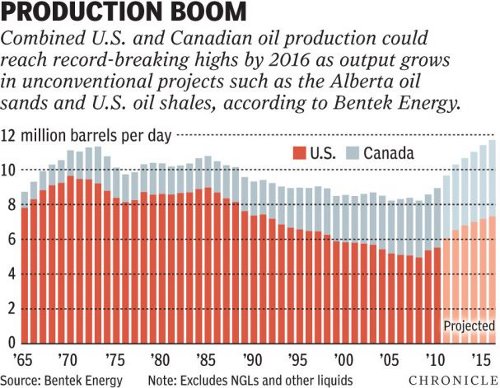 "We have this momentum out there to set about doing what we said we wanted to do back in the 1970s: reduce the flow of imports from volatile regions," according to Joseph Pratt, a University of Houston historian, as quoted by The Chronicle.

“It was like the holy grail back then. And suddenly it seems possible."

You want to own companies like Anadarko (NYSE: APC), which could easily run to $120 on this new billion-barrel oil find.

Anticipated Niobrara update is very positive as APC may position for a joint venture. We believe APC could raise $2 billion or more from a one-third JV. We continue to see APC's shale potential as one of most under-booked in our space, even before considering this Wattenberg upside, with less than 5% of risked potential booked as proved reserves at ye2010.

Our own Keith Kohl is still finding some of the most undervalued buyout gems operating at absurdly cheap prices.

Stay safe out there,