After the Trade Deal

I took my son and a couple of his friends to Killington, Vermont, for a few days of skiing over the President's Day weekend. We had a great time — except for the part where the rental tech didn't adjust my bindings correctly and a ski popped off in the middle of a high-speed power turn. I tried to go down easy, but at +35 mph, well, let's just say I may be lucky I only have a rotator cuff thing.

I ski-bummed at Winter Park, Colorado, for a couple years in my mid-20s. So now every year I take a pass at a black diamond mogul run, you know, just to see if I can still ski the bumps.

This year, it was a glade. And because of my shoulder, I wasn't using poles. The sight of this old man huffing and puffing his way through the moguls without poles must — oh, what am I saying, I must look like a lunatic.

Anyway. As you turn up the mountain from downtown Rutland, there's a deli: Coach's Deli. And it's got one of the best logos I've ever seen: 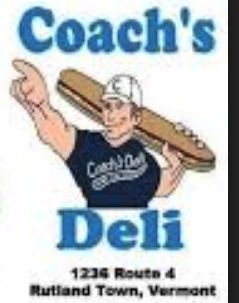 I mean, the man is calling his shot a la Babe Ruth — WITH A HOAGIE!!

There's no way this sign could be any more perfect. It obviously left its mark on me...

And the reason I'm showing it to you now is because I'm about to call a shot of my own. I'm going to tell you which group of stocks is going to rise after the U.S./China trade deal gets signed.

After the Trade Deal

The U.S./China trade deal is a done deal. Yeah, no announcement has been made. I'm sure there are still things that need to get worked out. In fact, I've been treated to a string of notifications from trade rep Robert Lighthizer about how the U.S. has to keep tariffs on the table and there has to be a more adequate valuation band for the China's yuan, blah, blah, blah...

I don't mean to trivialize the details. Mr. Lighthizer is doing his job. But make no mistake: The U.S. trade delegation isn't walking away from this table. Not now...

I think Trump is (finally) ready to move on after a year of this crap. And I am sure the Chinese want to put an end to it. And let me add that if Trump does manage to get out of this before real damage is done to the U.S. economy, he needs to thank his lucky stars... and the Chinese.

Because, as I see it, the current state of the Chinese economy is giving its leaders all the motivation they need to get a deal done now. Chinese exports are down 25%. GDP is coming in under target. The real estate market is stagnant. One of its most important global companies, telecom equipment maker Huawei, is blocked or restricted in the two biggest economic zones: the U.S. and the EU.

Throw a bunch of tariffs on top of all that, and the camel's back is sagging...

So yes, I think China is fairly desperate to get a deal done. More importantly, the stock market is telling us that this time, it's for real. Exhibit A: Apple is up $30 since it reported earnings a month ago.

Last week I wrote about a couple stocks that I think will rally as the trade war wraps up: FedEx (NYSE: FDX) and an undervalued Chinese real estate stock, Xinyuan Real Estate (NYSE: XIN).

This is different. This is about a whole sector of stocks that is slowly but surely becoming a major destination for investment money — and a major source of fat profits!

You know these stocks as cannabis or marijuana stocks. They are about to become front-page news.

Next on the Docket...

The numbers are amazing. Something like 65% of Americans support legal cannabis. There's a bill already before Congress to fix some of the issues that have come up since cannabis remains illegal according to federal law.

As one publication put it: “At the top of the bipartisan wish list are bills to fix the banking, tax and legal gray areas that have emerged as more and more states set up marijuana dispensaries in open defiance of federal law.”

And as Alaska's Representative Don Young put it: “It’s none of the government’s damn business what we do.”

So here's the deal: Donald Trump needs more winning. Yes, the China deal will be a win. Why not follow that up with the easiest win of all: legal cannabis?

Trump has already said he supports medical marijuana “100%.” And he said, “I support Senator Gardner [co-sponsor of the STATES Act, which will keep the feds out of states’ cannabis business]. I know exactly what he's doing. We're looking at it. But I probably will end up supporting that, yes.”

And if you haven't noticed, weed stocks have been on a tear this year. The big dog, Canopy (NYSE: CGC), has nearly doubled this year.

One of the weed stocks in my Wealth Advisory portfolio has run from $12 to $28 since February. And it has a P/E of just 4 (because cannabis isn't its only business). Just a couple months ago, this stock was up around $45, so you know there's still upside...

Another of our cannabis stocks is up about 65% this year. And this one is the only cannabis play that pays a dividend. And it has been completely immune to the volatility that has plagued other cannabis stocks...

That's because this company solves a mission-critical problem for many cannabis companies. That's why Wealth Advisory subscribers are up over 300% on this little beauty.

Finally, I probably shouldn't spill the beans on this just yet, but we've got a sub-$1 cannabis stock that we think could be huge. But we've got a six-month exclusive for subscribers, so if you want to get it, you know what to do...