Those pains, which radiated down his left arm, were accompanied by an intense pressure on his sternum that made it hard to breathe.

He knew what was happening. The same thing had happened to his father, and despite years of preventative measures and careful living, the family's killer gene had come back for another swipe.

The problems didn't end there.

Strapped into his child seat in the back of the car was Greg's 5-year-old son, Jack.

Greg knew he couldn't keep driving. The risk of losing consciousness was too great, so he did the only thing he could. He ignored his ringing phone and put all of his strength into pulling over... He succeeded, just in time.

With his dad unresponsive, it only took Jack a minute to get himself free of the child seat and another few seconds to leave the car. With cars rushing by just feet away, he stumbled off the shoulder, down a grassy slope and toward a line of trees.

This could have been a recipe for multiple tragedies, but thankfully, the Singletons had full 5G connectivity equipped on their personal devices, and the system went into emergency mode the moment Greg began feeling sick.

A sensor in his heart measuring blood flow to the heart muscle itself knew that Greg was having a heart attack even before he did. The notification to his doctor had already been sent, and a call was placed to his phone to inquire if he needed immediate help, but the 911 call had been held off until the system picked up further escalations of the crisis.

That escalation was registered the second Greg's heartbeat topped 120. At that point, EMTs and police were alerted, and even though Greg's position was still mobile at the time, units were dispatched to find him.

Emergency response arrived on the scene less than two minutes after Greg's car came to a stop, and he was immediately stabilized and rushed off to the nearest ER, but the problem of one missing 5-year-old remained.

Thankfully, Jack, despite being a master escape artist, still had a few things to learn about electronic tracking.

A tiny 5G transponder implanted under the skin of Jack's scalp lost Bluetooth contact with Greg's phone after Jack's distance from the car exceeded about 50 feet. That did three things. It alerted Greg, as well as Jack's mom, and also switched on the 5G transponder's GPS feature and turned it into a tracking device.

The information was routed to a police operator, and responding units were fully informed even before arriving on scene, so while one team worked to get Greg out of the car and onto a stretcher, another unit followed the GPS data right to the child.

Within five minutes, this would-be tragedy was defused into a dramatic but happily ending family story to tell, and it was all thanks to the wonders of 5G wireless internet.

In the Real World, Things Would Have Gone Differently

The problem is it's all a complete myth... a fabrication... a fairy tale that the tech companies want you to believe is on the way but is, in fact, still out of reach.

You might think that the hurdles to making a true 5G smart city are extremely complex and hard to understand, but the biggest roadblock is actually fairly easy to explain. It all goes back to a single technical inadequacy plaguing data storage.

For Greg's and Jack's 5G world of the future to really come together, digital memory as we know it today will have to be completely restructured.

Devices like the kind in Greg's chest keeping tabs on his heart, or the kind in the police used to find Jack, or the kind that will be embedded in roads and bridges and building frames to keep track of structural stability, hairline fractures, and unintended movement will all need to store data without access to external power.

This memory storage medium will need to stay functional and stable through hundreds of thousands, even millions of upload/download cycles.

And it will need to do all this for years on end without maintenance.

Now, to get an idea of just how big the problem is, take the two devices in our fictional scenario and multiply them by a few hundred million.

A few hundred million potential points of failure, all sucking electricity, all constantly heating up, cooling down, stretching, shrinking, aging.

Failure Is Inevitable... Or Is It?

That is about the size of the technological burden that just an average-sized metropolis equipped with true 5G smart-city functionality will need to tackle.

At the moment, the most common data storage solutions we use simply do not have the capability to come anywhere near this level of maintenance-free operation.

The closest the mainstream consumer market has to a true, stable "forever memory" solution is the common flash drive, like the kind you might use to store your old photos.

They can maintain data integrity without an external power source, but will start to fail after several thousands upload/download cycles.

Maintenance alone on a such a system implemented on a mass scale would make the whole thing a non-starter... unless something altogether new comes along.

That answer may have already arrived, and it's all thanks to a small Arizona-based tech company.

Its solution is already in use in a handful of very high-stress applications including satellites and motorcycle racing.

It is nothing short of game-changing as far as the tech industry is concerned, and a potential keystone for the future of city-wide 5G integration.

The company is small, as mentioned before — less than $150 million market capitalization as of today — but with the next generation of wireless internet already rapidly taking over from 4G LTE, the next several years could transform this company into a multibillion-dollar powerhouse. 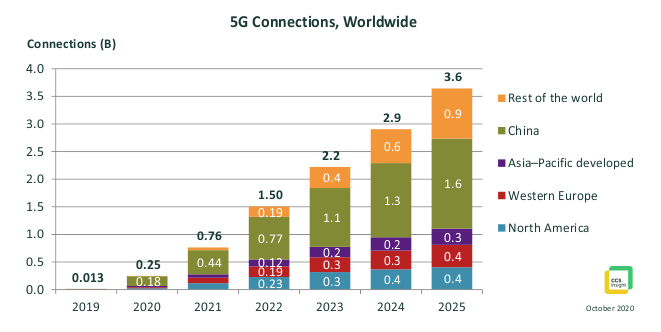 Shares trade on the Nasdaq, but like I said, when viewed in context with their potential, they're trading for pennies on the dollar.

My research team did a deep-dive analysis of this company and produced this video.

It's quick and informative, and you can get instant access simply by clicking here.

What you do with the information is up to you, but chances are you won't walk away the same.