5 Things Every Investor Should Know About Bitcoin

Referred to by some as “digital gold,” Bitcoin is one of the most controversial investment opportunities that exists today.

Over the past five years, the value of Bitcoin has skyrocketed nearly 25,000%, meaning if you had the foresight to buy and hold early, you could have earned as much as 250 times your initial investment.

But many investors are still keeping far away from Bitcoin, despite its historic rise. To the average person, it’s all just too unfamiliar, too intimidating, and too risky.

Yet after years of naysayers predicting that the sky will come crashing down, Bitcoin just keeps on chugging along.

Hard to believe, but the cryptocurrency has been around for almost a decade now, and at this point, it doesn’t seem to be going away.

In fact, Bitcoin's bid as a serious investment has only matured in recent years as the digital currency has come of age. Once rightfully considered a virtual lottery ticket, Bitcoin has gradually cemented itself as a legitimate asset to consider for your portfolio.

This week, the cryptocurrency marked its longest stretch trading over $500 since its inception nearly a decade ago. For six months, Bitcoin has climbed well past that mark, now trading near $750.

If that makes you feel like you've been missing out, but you aren't convinced just yet that Bitcoin is right for you, here are five things you should probably know about this unique investment...

#1: More and More People are Using Bitcoin Every Day

In its early days, Bitcoin was little more than a speculative bet for day traders hoping to turn a quick profit...

That’s because as a currency, Bitcoin had very little utility aside from on the black market. Like trying to pay your rent in yen, buying goods with Bitcoin was just something you didn’t do.

But after years of gradual adoption, more and more people are using Bitcoin for real-world transactions every day.

In January 2010, Bitcoin was averaging less than 200 transactions a day. Today, the digital currency is used in as many as 300,000 transactions per day. 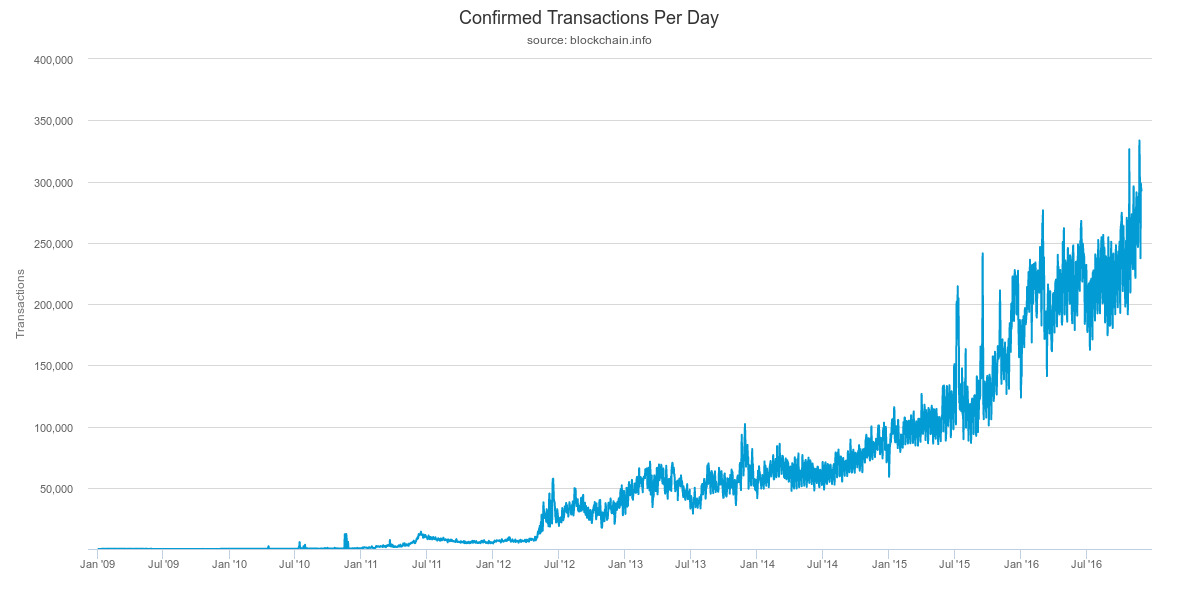 For long-term investors, this is great news, because after all, that’s where Bitcoin’s value exists. So long as adoption of Bitcoin as a currency continues to increase, its value should move in tandem.

There are two main reasons Bitcoin transactions have and will likely continue to increase. The first is a growing acceptance from legitimate vendors.

Since 2013 there have already been a number of major retailers that have taken the initiative to treat Bitcoin as a legitimate method of payment.

Notable companies include Expedia, which now accepts Bitcoin for all hotel bookings, Overstock.com, which began accepting Bitcoin for its products in January 2014, and Microsoft, which recently added Bitcoin as a payment option for its digital content.

Even the Sacramento Kings NBA franchise now accepts Bitcoin online and at the Golden 1 Center arena. That means NBA fans can get tickets, jerseys, hot dogs, and, yes, even beer with their bitcoins.

#3: Volatility is Trending Down

On top of an increasing number of vendors accepting Bitcoin, price volatility is trending downward — and for long-term investors, that’s a good thing. 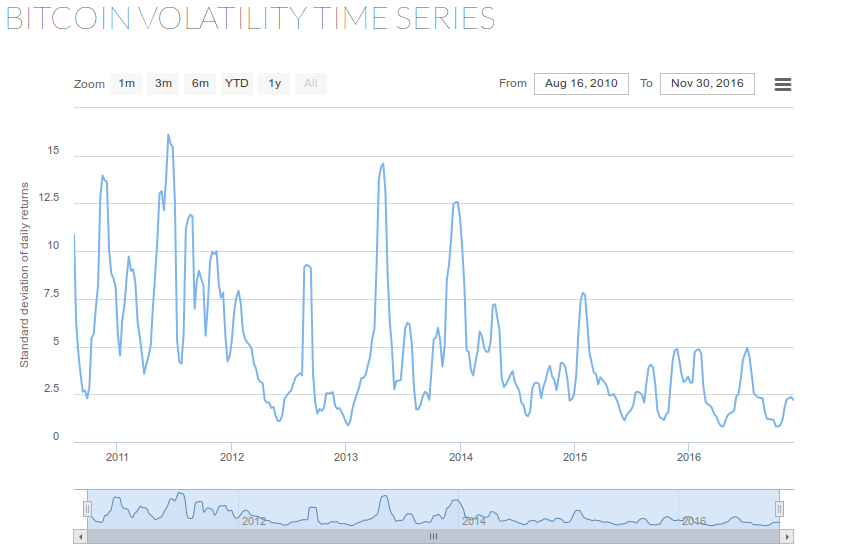 This simply means the day-to-day fluctuations in the price of Bitcoin are decreasing and the value of Bitcoin is becoming more stable.

And for a form of currency, this is incredibly important, because it means consumers’ money is more reliable.

If a loaf of bread cost $4 yesterday, $2 today, and $7 tomorrow, chances are you wouldn’t have much faith in the dollar. The same rule applies to Bitcoin: the less volatile it is, the better it will fair in the market.

Of course, Bitcoin will continue to have bouts of volatility, and it is still years away from being completely stable, but as of today, its price stability is on par with the Mexican peso and South African rand.

For a 10-year-old currency, that’s not too shabby.

#4: Bitcoin Has Been a Hedge Against Economic Uncertainty

For decades, if not centuries, gold has been the go-to safe haven in times of economic uncertainty.

But investors have increasingly turned elsewhere in recent years in the face of economic turmoil.

When China’s yuan collapsed in 2015, it happened again.

And when Brexit sent tremors through the market in 2016, Bitcoin investors had a field day, as the currency’s value exploded as much as $100 in a day. In the month leading up to Brexit, fears sent prices from $400 to over $750.

Bitcoin tends to work as a hedge because it's disconnected from the traditional financial system. It offers an easy way for people to exit economies that revolve around government money and bad monetary policy.

If you’re one of the many people worried that the U.S. dollar is on its last legs as the global reserve currency, Bitcoin isn’t a bad bet.

#5: Buying and Selling is Easier Than You Think

Contrary to popular belief, you don’t have to be a computer scientist to invest in Bitcoin.

Buying and selling the cryptocurrency is actually pretty simple: all you really need is a credit card, bank account, or PayPal to get started.

There are a number of easy-to-use platforms for trading and storing bitcoins. Some of the most reputable ones include Coinbase, Kraken, BitQuick, and Blockchain Wallet.

Buying and selling Bitcoin today is about as easy as trading stocks. Once you’re comfortable with whatever platform you choose, you can get started right away.

But remember, Bitcoin still carries plenty of risk and should only account for a small portion of your portfolio. The best investors are well diversified, and Bitcoin is just one place to potentially grow your wealth.