Blue Chip Stocks Look to the Next Big Tech Trend

In mid-2015, investment bank Piper Jaffray first labeled virtual and augmented reality “the next mega tech themes through 2030,” comparing the state of the technology at the time to that of smartphones 15 years ago. Piper was one of the first institutional players to issue such bullish statements on the emerging technology, but it certainly would not be the last.

Over the last year, the buzz surrounding AR/VR has been steadily increasing in volume. It's become increasingly clear that these technologies have the potential for truly explosive growth, with a number of major events driving both consumer and investor interest.

Since 2015, we've already seen a good number of respected research organizations and investment banks release exceptionally bullish outlooks on AR/VR. Here are just a few of the eye-popping projections floating around:

At the same time, consumers are just starting to get their first taste of dedicated VR platforms, with devices such as the Oculus Rift, HTC Vive, and Sony VR launching for the first time in 2016. Even our bland old smartphones are being repurposed into makeshift VR devices, with products like Google Cardboard and Samsung Gear VR shipping to over 5 million users.

Perhaps more important than any single product launch, investment bank endorsement, or industry forecast, though, is how enthusiastic VR users already are about these devices. If you really want to know how this product category is going to do, just look at the Amazon reviews for devices like the Rift, Vive, and VR Gear.

Here's a top customer review from Amazon user Soriea who really has some great insight on where VR is headed (a bit long, but worth the read):

I love tech but I haven't been overly excited over it of late. VR is one of those things that is hard to describe. No matter how many reviews of it I read, I just couldn't grasp what the reviewers were trying to tell me. I fear I will be no better but I will give it a good shot for those on the fence about it....

...I took a trip through our solar system in an experience called Titans of Space. It made it feel like you were in a little ship, flying up to each planet and some of their moons.... I am a sucker for space and this just blew my mind.... I was completely immersed and it made me see just how much potential this tech has. Something like this for learning and retention beats a text book and teacher lectures any day.

Netflix has an app that puts you in this château up in the snowy mountains. Nice big screen on the wall and to your eyes it really is a big screen. I have a 52" in my house but in VR, I felt like I was in front of a much much larger screen. Imagine when this stuff goes full HD.

I'm not really interested in it for gaming. For seeing shows, live events or visiting places you'd never get to see is really cool. If I turn I can see what's going on behind me, above, below and in front. Really tricks your brain when you reach out to touch what you see and it's not their. I can see this as being the next big fitness craze. Imagine walking in place on a treadmill while walking the tropics of Hawaii.

I did a couple of under water experiences. I honestly am not overly interested in the sea or sea life but this blew me away as well. full 360, look below and I could see the light above penetrating the surface of the ocean where I was. I was in a cage in the ocean, watching a great white shark swim around and bump the cage trying to get to me. Took an under water tour of the Arctic seas. Saw different [variety] of whales with a narrator giving information on each one.

I see so much potential for this. Right now games have the most attention but as the tech matures it can be used for a lot of things. I took a tour of some really fancy house. I could move through every room, check out the ceiling, the floors, just like I was there and my thought was, this would be so cool for real estate. Imagine shopping for your next house and not having to leave the house unless you found one you really liked...

I saw a beautiful performance with Cirque de Soleil's Zarkana. I've watched it six times. It puts you right there on stage and it was amazing. This will be huge for live events one day.

With all this information at hand, you'd have to be a fool to pass up the opportunity to get in on VR investments early. This is your chance at companies like Microsoft and Intel at the beginning of the PC era. This is the search for Apple and Nvidia when mobile phones were still in their infancy.

Yet while you should always be searching for the next “dark horse” of the technology industry, there are already a number of established tech firms with plenty of skin in the VR game right now. These stocks won't provide the biggest returns out there, but they'll be at the forefront of what so many in the tech industry believe is destined to be the “Next Big Thing,” and they're poised to see a flood of revenue as a result.

Back in 2014, social media giant Facebook acquired a small, two-year-old virtual reality startup by the name of Oculus VR for a striking $2 billion.

After years of preparation, Oculus's flagship “Rift” virtual reality headset launched in the first quarter of 2016. In partnership with Samsung, its Gear VR has been available since as far back as November 2015.

Initially funded through a Kickstarter campaign, the Oculus Rift platform offers gaming, movies, and interactive media in fully immersive 3D. By May of this year, just six months after launch, the platform has already reached 1 million users. For perspective, Apple sold 1.39 million iPhones in 2007, its first year of launch.

If we're to put any weight into the company's past successes, Facebook has a pretty good shot at making VR — and the Rift — the next consumer tech craze. CEO Mark Zuckerberg has been perhaps the most resounding proponent of VR and envisions a future where people will begin to live and play in these virtual worlds:

Imagine enjoying a courtside seat at a game, studying in a classroom of students and teachers all over the world or consulting with a doctor face-to-face—just by putting on goggles in your home.

Zuckerberg has even gone so far as to say these devices will be used by billions of people across the world, and if we're to take recent forecasts from IDC, Goldman Sachs, and Piper Jaffray seriously, he just may be proven right.

While it's certainly gotten less mainstream hype than Facebook, Sony Corporation could turn out to be a top fighter in the VR ring. The company is set to launch its PlayStation VR headset in October 2016 and is well positioned to do so with its already massive online gaming community.

Much like the Oculus Rift, PlayStation VR creates a 3D experience, but it is expected to retail at a much lower price ($399 vs. $599 for the Rift). The unit contains a high-definition LCD panel and has a field of view of about 100 degrees. It's jointly equipped with a high-sensitivity accelerometer and gyroscope to detect head movement with almost no lag.

Sony is jointly the top patent filer in the field of virtual reality to date, with over 365 VR patents/patent applications.

Strategy Analytics forecasts that dedicated VR devices from Oculus, HTC, and Sony will make up 77% of VR headset revenue this year.

While hardware will continue to make the headlines and account for a bulk of the revenue, there is another massive profit opportunity in VR you'll want to pay attention to, and that's content. According to research firm Tractica, VR content sales will overtake hardware sales as soon as 2019. 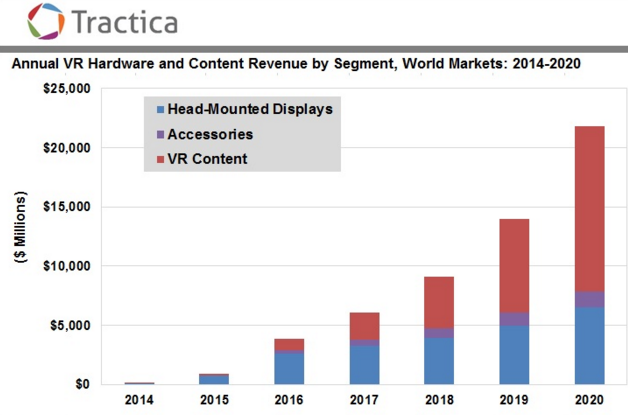 Walt Disney is poised to be one of the biggest players in the field of content, at least in the entertainment segment, and it recently led a $65 million series C funding round for Jaunt, a startup specializing in live-action cinematic VR.

Further, Disney signed a multi-year deal with Nokia (NYSE: NOK) in April to use its high-end 360-degree camera to capture virtual reality content. The media giant has already used the cameras to film video extras for The Jungle Book.

Disney also owns highly valuable assets in films, sports, and music, making it major player in future VR media, which is bound to capture the attention of consumers around the globe. The company also plans to use virtual reality experiences at its theme parks, though this would have a minimal impact, all things considered.