There's no doubt about it...

In 2015, we made an absolute fortune in pot stocks.

But had you told me 10 years ago that the fastest growing market in the U.S. would be legal marijuana, I would've guessed you were high.

After all, in 2005, prohibition had been in effect for nearly 70 years, and there was no indication that there would be any support by lawmakers for such a thing. But then something very exciting happened...

A few very smart politicians realized they could make a lot of money for their districts through the taxation of marijuana. Sure, conservatives wouldn't like it, but the overriding mentality of lawmakers has always been: “Cash rules everything around me.”

And so it began.

Today, 23 states plus the District of Columbia have some sort of marijuana legalization in place.

Next year, it will be more than half the nation.

Outside of the U.S., Canada is on the cusp of legalizing marijuana throughout the entire country.

Mexico's Supreme Court recently approved the first step in legalization, and we're starting to see more and more progress in South America, where cannabis is completely legal in Uruguay and is decriminalized in Ecuador, Peru, Bolivia, Chile, Argentina, and Brazil.

And this is all happening at light speed!

Just look at this map. Highlighted are all the states and countries where marijuana is legal or decriminalized. 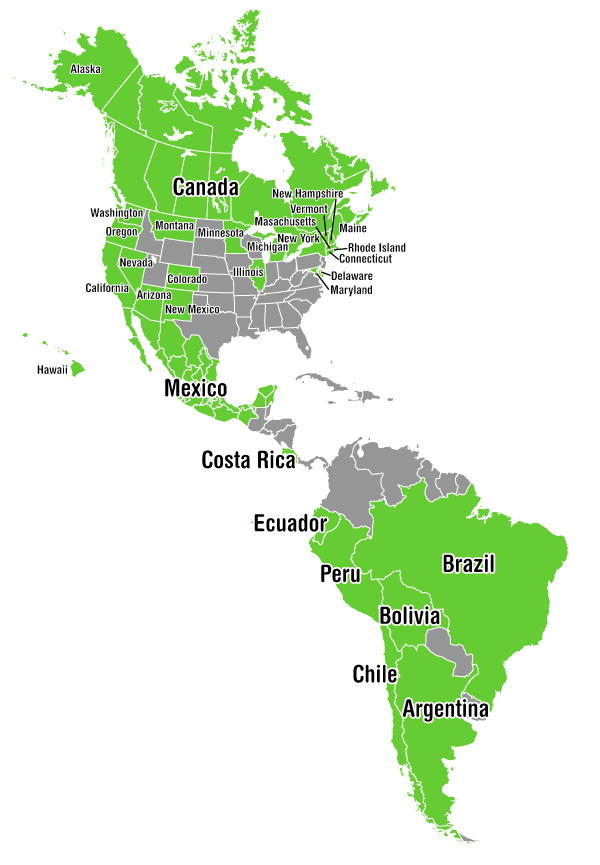 Looking at that map, it's not surprising that so many folks are looking for a way to profit from this burgeoning industry.

Certainly we've been at it for some time now, doubling our money on a few of these stocks just over the past six months.

Make no mistake; the legal marijuana market is booming. But that doesn't mean all marijuana stocks are going to make you rich.

A few years ago, roughly 90% of all legal marijuana stocks were dogs, scams, and fly-by-night operations.

There was a huge run, then a huge crash. What remained were a handful of companies that were actually legitimate.

It's unfortunate that it had to go down this way, but it's really no different than any other new, exciting market.

That being said, a sizable portion of the marijuana space has been cleared of the empty shells and laggards.

What remains is a market that's a bit more credible than it was just two years ago, a market that's being embraced by a growing number of state, regional, and national governments.

Of course, the question is, which are the best marijuana stocks to own in 2016?

There are three things I want in a legal marijuana stock.

Marijuana will soon be legal throughout the entire country of Canada. Those companies that are already operational in the medical marijuana space and are actively generating revenue in Canada are key targets.

Second, exposure to the edibles market.

Earlier this year, a small specialty edibles company quickly closed a $1.25 million round of financing.

Would you have ever imagined a company making pot brownies would be able to close a $1.25 million round of financing?

The truth is, many doctors prefer their patients ingest medical marijuana instead of smoking it, as there are still adverse effects from smoking. It's not good on the lungs!

As well, newcomers to the legal marijuana industry tend to be non-smokers. Cookies, candy, brownies, and oils offer consumers something that's a bit cleaner, a bit safer, and allows folks to avoid the negative stereotype of a pot smoker.

Edibles are definitely going to be huge.

And finally, there's the pharmaceutical angle.

Creating marijuana-based therapies is going to be big business. I'm talking on the level of Viagra and Tamiflu.

Marijuana has been used for centuries to treat all kinds of illnesses and diseases. But now that prohibition is on its way out, the pharmaceutical industry knows it must dip its beak in the waters of cannabis therapies.

From arthritis and epilepsy to PTSD and anxiety, marijuana continues to provide relief for millions of people. As the erosion of marijuana prohibition continues, more and more folks will have access to these therapies and, of course, demand them.

Don't Sit This One Out

Now, there are actually a number of legal marijuana stocks that fall into these categories. And of course, some are riskier than others. So when looking into these companies, be sure to do your due diligence so you know exactly what you're getting into.

If you don't have the time, you can click here to get access to my top three legal marijuana stocks for 2016.

Outside of those three, here a few to check out (all vary in risk tolerance):

2016 is definitely going to be an exciting year in the legal marijuana space.

The bottom line is that we're about to witness the end of marijuana prohibition in North America. At this point, only a fool would ignore this opportunity to make a boatload of cash.

Don't sit this one out.