I don't practice Santeria I ain't got no crystal ball
Well I had a million dollars but I'd, I'd spend it all

Daddy's back and he's got a new ride.

With the prevailing stream of bad news generated by the MSM, you might have missed the fact that things are actually getting better for the average American.

There are two little-followed data points that suggest we are gearing up for a major bull market run.

Are You Ready for a Bull Market?

For the first time in three years, consumer credit card debt has improved for three consecutive quarters. The year is expected to end with $36.4 billion more debt than the beginning of the year, but that's down from the previously projected $43.5 billion, meaning consumers are accumulating credit card debt at a slower pace. 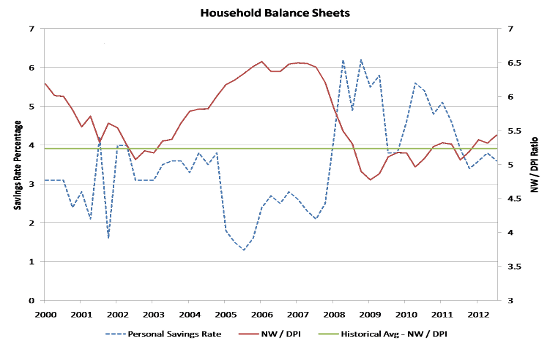 The red line in this chart is the ratio of household net worth to disposable income (think: real estate and stock market values vs. paychecks); the blue line is the savings rate.

As you can see, the five-year trend in net worth/DPI is up.

This chart shows us that when humans feel rich, as in the period from 2003 to 2006, they save less. When we feel threatened, we cut debt and increase savings.

Savings and net worth, ironically, are diametrically opposed.

Look at 2005 on the chart. Everyone was rich on housing and the stock market was pushing all-time highs. People didn't think they needed to save anything.

“Honey, we don't need to save, our house is up more than we make in a year. Let's just refi and buy one of those Chevy Suburbans with the Corvette engine. It's like free money!”

Two years go by, and these same people are looking for work and walking away from their mortgages. Those who still have a paycheck don't want to be like their neighbors and start saving like mad...

That said, the two data points of less debt and more wealth to disposable income tell us people are paying down credit card debt with their disposable income. At the same time, they are feeling more confident about their net worth. They are saving less.

There is no better argument for the idea that you should buy stocks people hate when they hate them than the homebuilders: 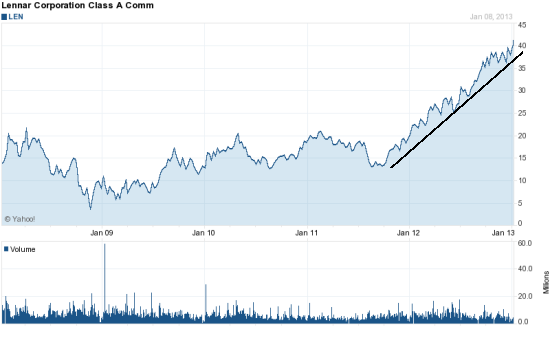 You would have been laughed out of your investment circle for advocating homebuilders during the bloodbath of 2009... but even the most cynical investors would take a 700% return in four years.

I first started recommending real estate again back in November of 2010.

Granted, the lion's share of the real estate money has already been made as housing bounces back. But that doesn't mean there isn't money left on the table...

Look for more positive real estate news in the first quarter. This spring could get very hot.

Lennar (NYSE: LEN) is back to being a momentum stock due to improving housing fundamentals. Inventory levels are down sharply, and bidding wars are back in hot spots like Washington D.C. and San Francisco.

Total revenue in Q3 climbed 34% to $1.1 billion, driven by pricing and volume growth.

With low interest rates and pent-up desire, look for this trend to continue.

A third hot sector is perhaps the most obvious...

Mobile computing is huge — and growing.

Most people would give up going to the movies, going out to dinner, and new fashion and hang on to their smartphones.

The list of handset makers is as vast as it is ever-changing. Leaders today like Apple, Google, and Samsung will likely be join the leaders of yesteryear — like Research in Motion (NASDAQ: RIMM), Ericsson (SE: ERICB), and Nokia (NYSE: NOK).

One thing we do know is that data needs to be moved in ever-increasing amounts.

One way to play the growing need for mobile data is to buy the companies that make the broadcast towers and lease them to telecommunication operators on long-term contracts. These contracts have been escalating in price by about 3%-5% every year.

American Tower (NYSE: AMT) is the clear leader in this space with 40% of its income coming from emerging markets.

AMT has delivered 35% annualized returns for its shareholders in the past 10 years. Last quarter, the company built 580 international sites and acquired another 850, adding more than 12,000 international communication sites. 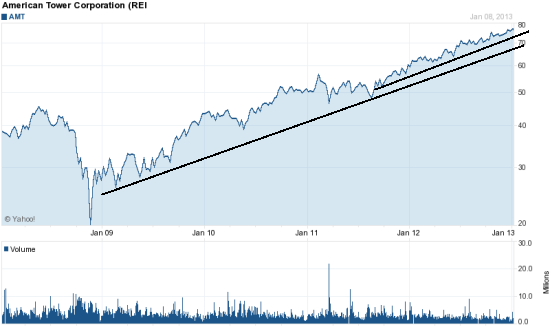 The stock has been rewarded. If you believe the trend is your friend, American Tower is oh so lovey-dovey.

Next week I'll tell you how you can profit from the death of a South American dictator — plus how to make a quick buck from the frugal shopping habits of an affluent teenage cheerleader...