I hope everyone had a fantastic New Year.

I celebrated the change in the calendar surrounded by family and friends on a rolling farm in the Adirondacks. I was in bed by one, in case you are wondering.

The news over the recent week has been dominated by the false hobgoblin of the fiscal cliff. It was a politically-created crisis to showcase the heroics of the politicians.

It reminds me of the once-celebrated shortstop Roberto Alomar of the Baltimore Orioles, who was known for his athletic catches reached just at the last moment.

Whereas Hall of Famer Cal Ripken stood in the right place so he could make the catch and throw out the runner with a practiced ease, old Robbie would jump at it with style and throw the runner out with a blistering last-minute throw to first...

It looked better, but accomplished less.

Hat and Cattle, Sizzle and Steak

So too must a politician first create the crisis from which he will save the masses.

Thus was the case with the fiscal cliff.

After all the sturm und drang, nothing much happened. The payroll tax that was foolishly cut a few years ago was restored, the debt will continue to expand, the budget won't be close to balanced, and the debt ceiling debate and potential United States debt downgrade is but weeks away.

Look forward to more preening and righteous indignation while both the Republicans and the Democrats continue to defend the status quo.

But change has a way of arriving unannounced at your door.

Trends that cannot go on won't. This includes promises to future retires and perhaps to current bond holders.

Many people say this is the wost political infighting they've ever seen. These people have short memories. Bill Clinton and Newt Gingrich used to go at it pretty hard. They were so cantankerous that they shut down the government.

Every wonder how a young intern got access to the president? It's because most of the paid workers were at home. Newt didn't cave despite the bad press, and Clinton still takes the credit.

The good news is that the checks and balances of the branches of government are working. Government is supposed to be slow to action. It was designed so that ill-thought-out faddish ideas don’t sink the ship.

Now that the Republicans have voted to raise taxes, we might see some spending cuts. There is no one who can seriously argue that the bloated federal government can't cut five percent across the board... We should do this every year until the budget is balanced.

People forget that the late 1990s economic boom was also associated with a balanced federal budget. Companies love to expand, but they also like to remain solvent. Capex will go up if the government is more fiscally responsible.

In other good news...

The Institute for Supply Management's manufacturing sector index rose to 50.7 last month from 49.5 in November, with 50 as the break-even line between growth and contraction. The index has hovered around that line for the past six months, the ISM said, reflecting weakness in both U.S. and global economic growth.

Look for strong growth in the housing-related industries, aerospace, and automobile production in 2013.

Polk, an auto industry research company, says: “New light vehicle registrations in the United States in 2013 are expected to rise 6.6 percent over 2012 levels to 15.3 million vehicles. North American production volumes are expected to increase to about 15.9 million units, which would be a 2.4 percent increase from 2012.”

This is still below the pre-recession peak of 17 million units, but people have to replace those old cars at some point...

Given $70 labor costs for mechanics, it doesn’t take too many repairs before a new car payment looks like the better option. This is especially true given the low interest rates.

My short AutoZone (NYSE: AZO)/buy Ford (NYSE: F) trade I told you about a month ago is working like a charm... 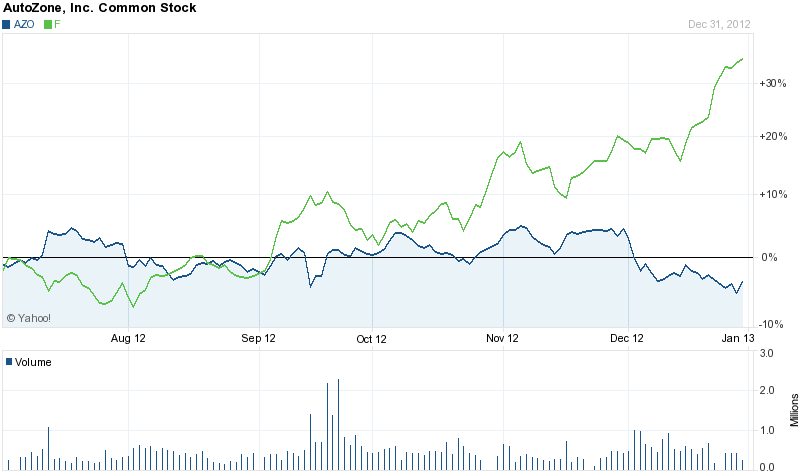 There have been plenty of words written about the fracking boom in this country.

The trend is so positive that the International Energy Agency's recent report projected that U.S. would outproduce Saudi Arabia in terms of total oil products by 2020.

We are swimming in natural gas. It is priced for February delivery at $3.20 per mmbtu well below its $12 high. This abundance is leading to a surge in new chemical plants built along supply routes — which leads to other manufacturing...

Ethane, a natural gas liquid, is a key ingredient in many petrochemical products like plastics and other synthetic fibers.

An American Chemistry Council study showed a 25% increase in the ethane supply would result in $132 billion in new economic output after an investment of $16 billion.

It would also create more than 40,000 new jobs for the chemical industry and its suppliers. And this is before the estimated 40% increase in natural gas liquids production by 2020.

If you know someone looking for a solid career, give him the old Graduate line: “One word: plastics.”

Other companies that burn a lot of energy are also moving to the States to take advantage of cheap natural gas...

Turkey's leading steel pipe manufacturer, Borusan Mannesmann, will invest $150 million in a U.S. plant that will start production next year. They make the pipes used in pipelines, a hot North American sector.

Another company that turns natural gas into usable diesel and jet fuel is building the first sizable American refinery since 1977.

Right now, after years of doom surrounding American manufacturing, no one wants to own these companies — except me.

They are undervalued, and I’m a buyer.