A new bull market is forming...

And it has everything a contrarian investor could want.

It has been out of favor for years. In fact, USA Today said it's been left for dead for “nearly 25 years.”

Its value has been slowly and consistently trending higher. Over the last decade, its run-up has been more consistent than gold. During 2008's credit crisis, it actually went up.

It has lagged far behind everything else for a long time... its upside potential is enormous...and it has less risk than every other major market sector...

Best of all, recent government policies will make this one of the top performers in your portfolio for years to come. A few years from now, we’ll recognize this as a turning point — like gold and oil in 2001 and stocks in the early 1980s.

And it’s all going to start changing now...

A New Bull Market is Born

The bull market I've been describing is electricity. It's been picking up steam right in front of our very eyes.

And what you’re going to see play out over the next couple of years will drive your electricity bills up 100%... or lead to brownouts and blackouts.

You see, electricity prices have been rising consistently over the last few years: 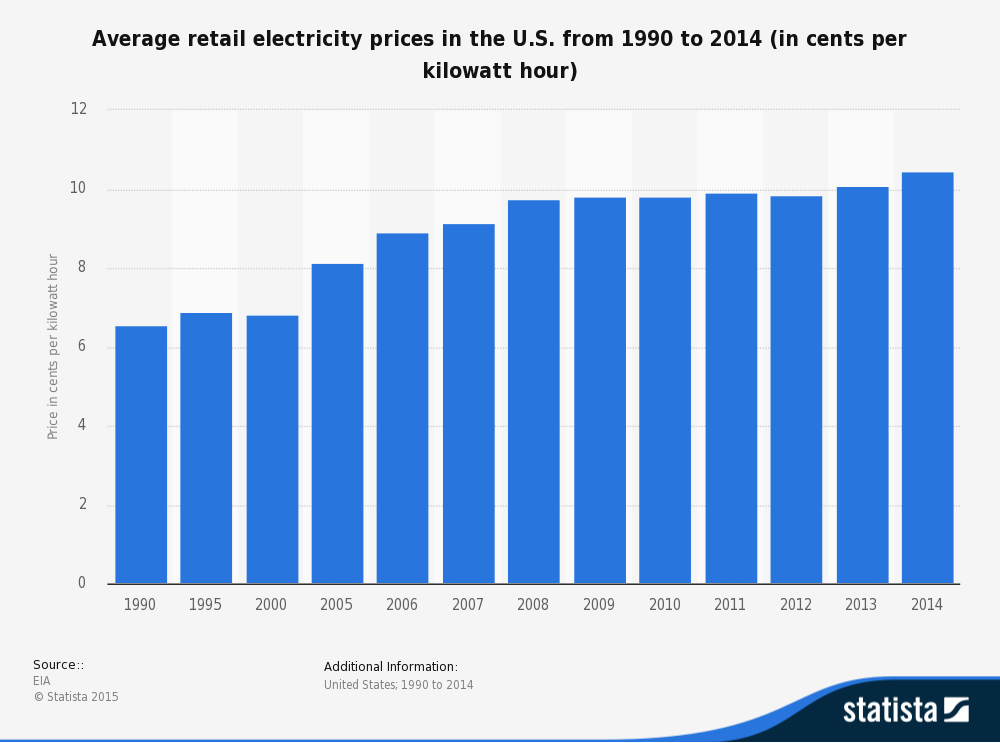 Average electricity prices have risen 37% over the last decade.

You might not think 37% is anything to get excited about. However, it’s where electricity prices are headed that will be exciting and profitable...

The Future of Electricity Prices

Electricity is just like any other commodity. Like food and oil, it’s essential. Customers buy it consistently, and its price is set by simple supply and demand.

The largest driver of electricity demand going forward will be commercial demand.

Just look at manufacturing (yes, manufacturing). Despite overblown and woefully wrong “America doesn’t make anything anymore” reports, industrial output has grown steadily for a long time. And that fact is not going to change any time soon.

Now, we realize that while output increased, millions of manufacturing jobs disappeared...

But it's this very situation that’s bullish for electricity.

The manufacturing productivity boom has been driven by the increasing use of technology and automation — both of which require more electricity per unit of output.

There’s also the ongoing boom in technology and telecommunications to keep electricity demand on the rise.

An Edison Foundation study points out: “Electricity use is expected to increase steadily in commercial establishments…electric power intensity will increase as these establishments add linkages to the Internet and other telecommunications options.”

The Energy Information Administration agrees. It sees a steady increase in electricity consumption to drive the uptrend in productivity across the economy: 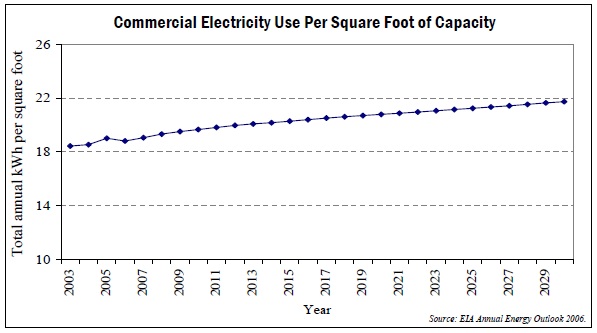 It’s the supply side of the equation that gets interesting...

Casualties of the War on Coal

This steady increase in capacity combined with rising prices shows how strong electricity growth has been — and how closely matched supply and demand are.

But that’s all about to change.

Thanks to a number of new regulations, electricity supply won’t just be limited to the normal protests of NIMBYs (Not in My Back Yard) and BANANAs (Build Absolutely Nothing Anywhere Near Anything)... It will start shrinking.

Remember how the government, environmentalists, and the timber industry colluded to use the spotted owl to drive out small competition and increase profits for the large timber companies (in case you missed that story, you can read it here)? Well, they’re at it again...

Over the last few years, the Environmental Protection Agency (EPA) has declared War on Coal.

Basically, 8% of generation capacity will be cut out of the market. And this will happen at a time when demand is on the rise.

The net result: an explosion in prices and sizable profits for investors getting positioned now.

The price increases are going to be staggering.

Remember what California went through a decade ago when Enron artificially cut supplies?

Well, it’s all going to be happening again. The mainstream media and utility companies are catching on. But even their dire expectations are too low...

U.S. News & World Report says: “Two new EPA pollution regulations will slam the coal industry so hard that hundreds of thousands of jobs will be lost, and electric rates will skyrocket 11 percent to over 23 percent, according to a new study based on government data.”

The Chicago Tribune says: “Consumers could see their electricity bills jump an estimated 40 to 60 percent in the next few years.”

American Electric Power, a large utility company, estimated the combined cost of the regulations and would cause its electricity prices to increase 10% to 35%.

It’s time to get into "boring utility companies" — because they’re not going to be "boring" for much longer.

Just Another Reason to Love an Unloved Sector

The difference will be the coming price surges for electricity haven’t been priced into utility stocks.

When a sector reaches bubble highs, it will easily make up two to three times more than its long-run average share of the S&P 500.

Utilities are at the exact opposite end: They are well below their long-run average shares of the market.

Also, utility stocks’ dividend yields are reaching levels when the sector is trading at or near market bottoms. Yields in high-cash-flowing sectors like utilities are one of the best measures of relative value. When they’re up, the sector is cheap (and vice versa).

Furthermore, when it comes to downside risk (the top focus of every major money manager and investor), utilities shine.

The utility sector’s beta (a measure of how closely correlated a stock or sector is to the overall stock market) sits at 0.56. A low beta like this one means if/when another market correction of 10% comes, utilities would likely only fall just over 5%, a great margin of safety indeed.

But there’s one more driver for utility stocks the market hasn’t noticed yet — and can and will eventually make them one of the most sought after assets in the market...

The Next Generation of Safe Havens

In an era defined by volatility and low interest rates, utilities' steady performance and high levels of income will become very attractive to investors. And they’re on the verge of becoming a new safe haven.

Other safe havens are no longer safe...

Gold has become a speculative vehicle. Although the fundamentals are in place for years of gold gains — and any correction should be welcomed as a buying opportunity — gold will sell off many times in the future. Some of these gold corrections will be over 10%.

Treasury bonds are even worse. They’re a ticking time bomb. When interest rates do rise (and they will) Treasury prices will collapse. Merely returning to the average interest rate levels of the past decade would cut the values of Treasuries in half.

With real interest rates in negative territory, they are actually losing money each year anyways. Treasuries are the furthest thing from safe.

Even our long-time favorite safe haven — farmland — has jumped back into bubble territory. When we first advised the purchase of farmland a few years ago, it was unheard of...

One of the few safe havens is and will continue to be utilities — especially electric utilities.

And with electricity prices to spike higher, not only are they safe... they will be extremely profitable.

The name of the game is buy low and sell high. Utilities are low, and rising electricity prices will push them much higher in the years ahead.