Investors have long been told of the great promise fuel cells hold for generating cheap and clean electricity. Using little more than hydrogen (the most abundant element on earth) and air, fuel cells can generate electric power with water as the only byproduct.

But despite the incredible potential of fuel cell technology to disrupt the energy market, it's been a long and arduous road to commercial adoption since its invention in 1838. Hydrogen fuel cells have been one of the toughest areas for growth-centered investors, with many seeing huge promise from the technology but few knowing how to profit from it.

The disappointing truth behind fuel cell stocks (at least so far) has gone through a tumultuous market. We've seen several waves of fuel cell hype among retail investors, but the lack of profitability has pulled them down time after time.

However, t's finally beginning to look like the fuel cell market may have a chance at meeting its once-lofty expectations. At the very least, it seems that 2022 could prove to be an especially attractive entry point as revenues ramp up and long-term projects come to fruition.

Below, we'll address the key reasons you'll want to consider adding a few fuel cell stocks to your portfolio.

Four Reasons Fuel Cell Stocks Are Poised to Surge in 2022

Reason #1: The Period of Disillusionment Is Over

The quickest way to lose money in the stock market is to get caught up in false expectations. But with most fuel cell stocks trading close to 10-year lows and volume as thin as it is today, it's safe to say that the majority of “blue sky” investors have exited this sector already.

The hype that once bloated fuel cell stock prices has, for the most part, come and gone. Keeping in mind the enormously high premiums once priced into fuel cell stocks due to their disruptive potential, 2022 is shaping up to be quite the attractive entry point for long-term investors.

Reason #2: After Over a Decade in the Red, Fuel Cell Firms Are Beginning to Pull In Revenue

After many quarters and years of posting negligible revenue, several fuel cell companies are finally turning the corner and have started to see money come in for the first time in the history of this sector. While no company has yet proven consistently profitable, the tide is clearly shifting.

In June 2014, for instance, a small fuel cell company by the name of Plug Power (NASDAQ: PLUG) recorded its first-ever quarterly profit. While the success of PLUG was short-lived, this moment signaled a crucial turning point in the niche fuel cell market.

Fast forward to 2022: Plug Power has been building on the momentum from June 2014 and hasn't looked back. It posted $140.8 million in revenue in the first quarter, a 96% year-over-year increase. For the full year, it's targeting $900 million to $925 million in revenues, which would represent a roughly 80% increase.

Reason #3: Fuel Cell Cars (and more!) Are Hitting the Road

While the path to consumer adoption has been undeniably slow, fuel cell vehicles have long been regarded as one of the most potentially disruptive technologies to hit the automotive industry. As Car and Driver magazine said in its November 2014 issue:

The fuel-cell vehicle (FCV) is an automotive holy grail that promises the low emissions of a battery-electric vehicle (BEV) with the range and refueling convenience of a gasoline-powered car.

The sentiment is far from changed in 2022.

This once barren, niche market has very recently reached a clear turning point. Three fuel cell vehicles have been coming off the lots consistently, including the Hyundai Tucson Fuel Cell, the Toyota Mirai, and the recently revealed Honda FCX Clarity.

With each generation of fuel cell vehicles, these cars are becoming increasingly cheaper to produce while simultaneously lengthening their range and shortening fill time. The Honda FCX Clarity, for instance, boasts an impressive 435-mile range, a three-minute fill time, and a compact fuel cell powertrain that's one-tenth the cost of previous versions.

Of course, costs still need to come down, and infrastructure needs to develop, but these same caveats once applied to plug-in electric vehicles; and just look at where Tesla Motors (NASDAQ: TSLA) is today.

With three major automotive companies now pushing fuel cell technology, it's only a matter of time before hydrogen filling stations begin popping up across the globe. California is taking the lead with virtually all of the 107 fueling stations in the U.S. today. It is targetting 200 by 2025 and envisions 1,000 by 2030. Expansion on the east coast is planned in the Northeast with rapid expansion along the I-95 corridor. 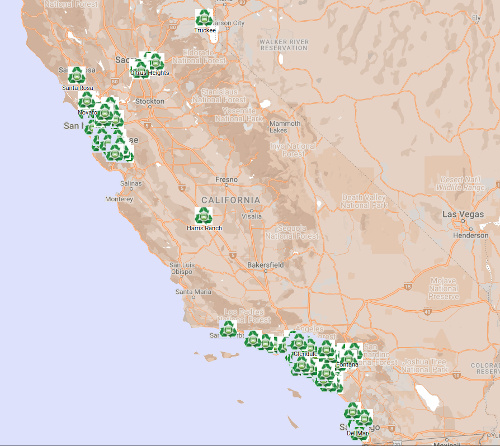 Trucks, trains, planes, submarines, and even cargo ships have been outfitted with hydrogen fuel cell power supplies, and they're all showing incredible potential compared to battery-driven alternatives.

Reason #4: Research Firms Suggest the Fuel Cell Market Is on the Cusp of Exponential Growth

When investing in any market, it's essential to take industry forecasts into consideration. There are entire organizations dedicated to determining market size and predicting revenue outlook, so you'd do best making use of that information.

Perhaps one of the most important habits of an intelligent growth investor is patience. As promising as any technology might be, it could end up taking many years to develop into commercial viability.

It's OK to take gambles every now and then, but you don't want to jump the gun by betting the farm on unprofitable companies. When it comes to fuel cell stocks, you'll want to reserve any investments for the speculative section of your portfolio right now.

Simply put, don't invest anything you aren't willing to lose, and keep an eye on the stocks you like until they show consecutive quarters of profit.

Below is a list of five fuel cell stocks worth keeping an eye on, with further detail on our top two breakout candidates.

Plug Power designs and manufactures fuel cell systems known as GenDrive and GenFuel that replace conventional electric batteries. At a market cap of ~$9.5 billion, Plug is one of the largest hydrogen and fuel cell technology companies in the U.S.

Plug found its first viable market powering indoor forklifts, earning a number of highbrow customers including BMW, Walmart, Mercedes, Kroger, and Whole Foods. However, it's expected that the company will soon branch off into several other verticals, including airport ground support, airport tuggers, transport refrigeration units, and hydrogen generation.

Plug Power currently holds the largest share of the North American Class 1, 2, and 3 clean energy lift truck market. The company has a joint venture with Axane, an Air Liquide subsidiary, to meet growing demand for its GenDrive fuel cell products in the European material handling market.

In early 2022, it announced a 20 ton per day contract for "green" hydrogen with Walmart to power its lift trucks in distribution and fulfillment centers starting in 2023.

As mentioned above, the company posted $140.8 million in revenue in the first quarter of 2022, a 96% year-over-year increase. For the full year, it's targeting $900 million to $925 million in revenues, which would represent a roughly 80% increase.

FuelCell Energy has made tremendous progress in the U.S. with a number of large projects that will be ramping up over the next several years. The company recently signed a 20-year agreement with Alameda County, California for a 1.4-megawatt fuel cell plant. Notably, this project is to replace a previous FuelCell Energy power plant installed back in 2006, which goes to show just how sticky these customers are.

In addition to the Alameda plant, FuelCell recently won four new orders from the U.S. Department of Energy that will add approximately $24 million to its backlog. Three of these projects are related to the commercialization of the company's solid oxide fuel cell (SOFC) technology, while the fourth involves a carbonate fuel cell power plant.

FuelCell is also gaining traction in Asia, specifically with a number of recent wins in South Korea. Most notably, the company has partnership with POSCO, a South Korean multinational steel-making company that is licensed to manufacture Direct FuelCell (DFC) power plants in South Korea.

As a part of this partnership, POSCO is building a new manufacturing facility in Pohang City with an initial production capacity of 100MW per year.

While performance in the fuel cell market has been less than ideal over the last decade, stock buying opportunities are finally opening up for investors who have been patient enough not to speculate. With the majority of fuel cell stocks trading significantly down from all-time highs and profitability on the near horizon, 2022 is shaping up to be a promising entry point.

Fuel cell companies remain high-risk, high-reward stocks, but a number of these tickers are worth keeping on your watch list as the industry shapes up through 2022 and beyond. Look to Plug and FuelCell to be the ones leading the way.