Hey. How’s it going? Pretty crazy couple of weeks, huh? Are you doing okay? If I’m being honest, I’m a little burned out. Every day, it’s something else. So, I really feel your pain and anxiety. And I mean it when I ask how you’re doing. I want you to care about your health.

Don’t let the market’s reaction to coronavirus take more of a toll on you than the actual virus itself ever could. Go for a walk. Step out on the porch or stoop and just be for a minute. Turn off the news and relax. Read this first, of course. But then, take a break.

And in support of that suggestion, I’m going to break from my usual structure this week. Typically, I take a good amount of time to come up with catchy headlines and make an outline to keep some sense of order to my thoughts and arguments.

But the markets have been all over the place and so have I, so I thought it would be fun to give you a look inside my head as all this insanity unfolds. I need a little fun after the week we just had. And there are a few other things in my head besides a hamster on a wheel.

What I’m Thinking About

It’s been a pretty exciting couple of weeks, huh? Watching markets plummet and then rally from pure exhaustion and then plummet again the next day.

As I’m writing this, we’ve already hit the circuit breaker in U.S. markets twice this week. By the time you’re reading it, we might have hit it again. The first and only time they’d been triggered before was in 1997. This week there were two.

For anyone who’s confused by that term, the circuit breakers are stops built in by the SEC to keep the market from crashing too fast. They’re actually called “trading curbs,” but everyone seems to prefer the term circuit breaker. If the market falls by 7%, they’ll halt trading for 15 minutes.

If it drops another 6% after that and hits a 13% drop for the day, trading will halt for another 15 minutes — that hasn’t happened. And if markets keep dropping after that and hit negative 20% for the day, the SEC sends everyone home and shuts trading down for the rest of the day. That’s never happened either. Not yet, at least.

So, what are you doing? Are you panicking and selling your shares so you don’t have to watch your account totals drop any lower? I wouldn’t blame you. The pundits on TV and online are making it out to be the end of the world.

It’s tough to keep your emotions in check when there’s a 24-hour news cycle that profits from getting your emotions out of control. And it’s even harder to take advice from people who are telling you to buy certain stocks because they’re not going to go down as much as other stocks.

And right now, most of the market is selling for way less than what it’s worth. 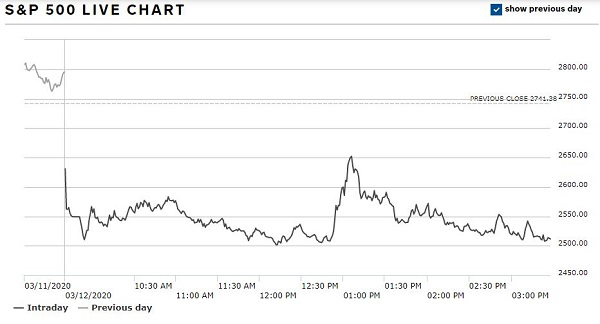 It actually got down to 2,500.65 before starting to turn back up in what seemed like desperation to me. Even a $1 trillion promise from the Fed to pump liquidity (read: money) into the markets couldn’t stem the bleeding. But that 2,500 floor is holding… for now.

In December 2018, the S&P got down as far as 2,300 and change. And I can see it dipping down to there before we’re all done here. I’m really not entirely sure where the next resistance level would fall. But I am sure I don’t want to see us test it. And I’m concerned we might.

This weekend will be two days for bad news to pile up while none of the algorithms can sell stocks to react. Monday will probably bring another solid drop. It’s going to get worse before it gets better. But there’s still a way for you to profit while the market goes down.

What I’m Investing In

If you feel the same as me and think this isn’t over by far, then you should put some money on it. You don’t have to sell individual stocks short. And you don’t have to trade options — although buying puts is a great way to profit from price drops.

You can just buy an inverse ETF. It’s a fund that tracks an index, industry, sector, or whatever. But instead of moving with the underlying asset, it moves opposite.

I had shares of the ProShares UltraPro 3x Short Crude ETF (NYSE: OILD). It’s like an inverse ETF on steroids because it uses leverage to give triple the inverse of crude oil prices. So, I bought some last Friday morning for about $25. When the market opened on Monday morning, my shares were worth $47. By the end of the day, they’d gone up to $54. 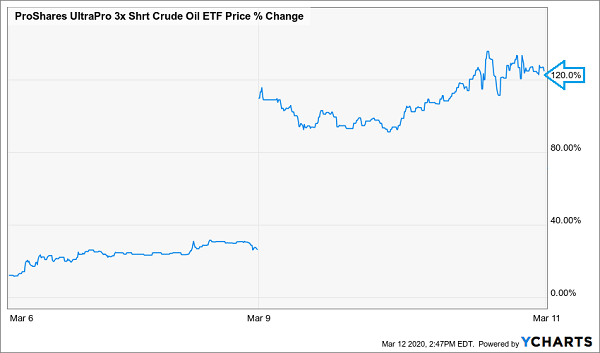 I also picked up shares of the ProShares UltraShort S&P 500 (NYSE: SDS). It tracks the inverse of the S&P 500 and uses leverage to double that. On Friday morning, I bought them for just under $29. As of Thursday at noon, they were worth nearly $38. 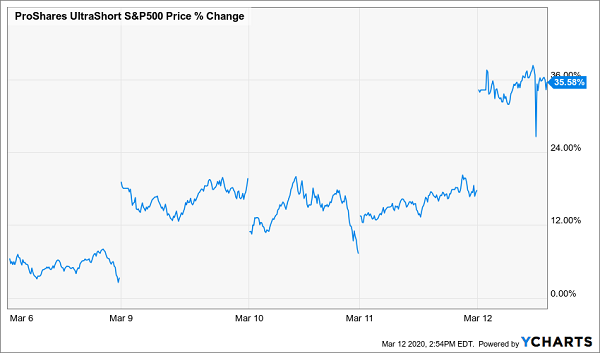 The inverse oil ETF more than doubled my money while the market got crushed. And when the market shut down Monday morning after dropping 7%, it just meant I had to wait 15 minutes before my 14% gain on that S&P 500 inverse ETF started to grow again.

And there are a ton out there. At least one for every industry, index, and commodity you can think of.

And when you’re ready to call a bottom in the market and close out your short positions, you have that much more cash to put to work in all those stocks that are on sale for 50% off.

What I’m Thinking About Investing In

But then you get into the whole trying to catch a falling knife thing. Are you gonna grab the handle? Or are you gonna slice your fingers off on the blade?

Is Bank of America going to drop lower than $20? It very well might. But five years from now, when it’s trading for $45 a share, are you going to be happy you bought at $20 or upset you didn’t buy at $19?

Buying stocks when they’re low always sets you up for the chance of taking more losses before you start to gain. But it’s people who are willing to take a small loss right now who will be cashing out the big gains down the road.

The next Warren Buffett might be loading up on Apple, Cisco, and Southwest shares right now. And that person might watch those investments drop another 10%, maybe even 20%. But she’ll keep adding shares and 10 years from now, she’ll be known as one of the greatest investors of her time.

So, I’m another person telling you to buy. But don’t buy it all at once. This drop isn’t over and I don’t know where it’ll end. Make a list of stocks you’d like to buy when all this is over. I’ve got one.

I’m going to pick up Bank of America at 2016 price levels. I’m adding shares of Cisco and locking in a super-high dividend yield from them. I’m looking at Southwest and the other airlines.

My old corporate home, Morgan Stanley, is priced lower than it’s been since 2016. I’m not buying it yet, but I’m sure I’ll add some shares before all this is over.

I’ve been talking about the cruise lines with one of the founders of Angel Publishing (our parent company). The cruise ships laden with infected passengers are sinking those stocks as fast as the planes laden with terrorists crashed airline stocks after 9/11.

Carnival is down almost 65% YTD. But when people start feeling like it’s safe to travel again, you can bet they’re going to be booking a lot of vacations all at once. There’s only one cure for the kind of cabin fever a months’ long self-quarantine causes.

But for now, I’m keeping my shorts on and my extra cash on the sidelines. I’m making my list and setting buy targets. I’m not worried about catching the bottom; I’m worried about buying quality companies for less than their true worth.

And while you or I may not become the next Warren Buffett from this drop, we’ll be a whole lot closer to his net worth a few years down the line.

And who knows, the next Warren might really be reading this right now. It really might be you. Afterall, he did make over 99% of his fortune after he turned 50.

So, don’t panic. Set up some short positions to hedge against more losses. Make a list of stocks you want to buy and decide where you’d be happy buying them.

Don’t try to wait for a bottom or you’ll miss it. Pick your happy prices and execute. Then don’t look at your account for a few weeks.

And remember: It’s all going to be OK. It’s not different this time. We’ve come back from worse.

My Partner in Crime
Briton Ryle's Wealth Advisory newsletter has brought in some big gains since Jason Williams joined the fray. Now Jason is getting into options as well, and Briton Ryle explains why this is a smart move...
Blood in the Water: Buy These Stocks on Coronavirus Panic
In the wake of the novel coronavirus outbreak, this niche basket of stocks is on deep discount.
Buffett's Envy: 50% Annual Returns, Guaranteed
Warren Buffett once told investors at an annual shareholder meeting, "...it's a huge structural advantage not to have a lot of money. I think I could make you 50% a year on $1 million. No, I know I could. I guarantee that."