Yes, Electric Cars Are a Fundamental Failure. Here's Why

Tesla (NASDAQ: TSLA) stock is up more than 650% over the last year.

If the split that turned each share into five hadn't gone through earlier this summer, shares would be selling for just under $2,500 a pop as of this afternoon.

Elon Musk, CEO and James Bond villain-caliber tech industrialist, is well on his way to realizing a bonus package worth in excess of $50 billion — the biggest of its kind, by far, in history.

Tesla is setting new sales records with its Model 3, designing new exciting models, planning to more than double its inventory of Gigafactories, and is already solidly the most valuable auto brand in the world — more than twice the size of the next biggest, Toyota (NYSE: TM).

And yet, each and every vehicle that rolls off Tesla's production line, at its heart, is a total failure.

But how can this be? Can so many people be so foolish?

Well, no. There are plenty of reasons to want a Tesla. They are incredible machines. Their roomy, comfortable four-door sedans put European super exotics to shame. Their onboard technology makes the car far more aware, if not objectively smarter, than the average driver. The interior styling is a next-level improvement over everything else on the market today, lending even to its highest-end competition the unmistakable reek of obsolescence.

The Tesla is a great consumer product, but where it fails miserably is in its purest underlying function: saving the world.

Or, at the very least, not damaging it any further.

The issue with Teslas, as is with every other electric or gas-hybrid vehicle on the market today, is that while they burn far less or no fossil fuels to run, they still consume those fossil fuels by proxy.

In other words, their usage puts carbon into the atmosphere indirectly.

Fossil fuels, the greatest single source of human-produced atmospheric CO2, still account for a vast majority of the world's energy production — 84% to be exact.

The U.S., the single biggest consumer of electricity, gets 63% of its energy from coal, oil, and natural gas.

In developing parts of the world, this number isn't just higher, but the overall consumption rates of fossil fuels are rising right alongside urbanization rates.

Europe, which leads the world in renewables, still derives almost one-third of its total power production from fossil fuels in various forms.

So whenever you plug that Tesla into the wall, unless you're producing your own energy with solar cells or paying a premium for renewable energy every month, congratulations — you just burned yourself some coal, oil, or natural gas to make that sweet electric motor whirr your well-heeled ass to the grocery store.

So after all the good intentions, after all the milestones and adulation and sales records and billions in stock options, you and Elon Musk are still both failures.

Any way you look at it, today's EVs are nothing more than road-going appliances. They suck energy from external sources just like everything else. As long as those sources pollute, you never fully escape the carbon market.

Electric cars are a Band-Aid, and everyone in the industry, including Elon Musk, knows it. A true solution, the only solution which will take humanity to the next level in terms of personal transportation will be to develop a technology that can make 100% of its own power from a readily available and abundant fuel and return nothing (or at least nothing harmful) as a byproduct.

It might sound like a fantastic set of requirements, but this magic-bullet tech actually exists today. The cars and busses it powers are on the road right now. You've probably passed them and didn't even take notice.

The technology is powered by the most abundant element in the universe — hydrogen. The only thing it leaves in its wake is water vapor and a little heat.

They're all betting on the wrong horse.

This really is the dawning of a new era, and right now, there are very few things holding the technology back from becoming the new world standard.

My colleague and the founding editor of The Crow's Nest, Jimmy Mengel, has been studying this technology for more than a year now.

He flew out to California, rented a hydrogen-cell powered car, drove it around, posed for pictures with it, he even sipped the drops of water condensing on its exhaust nozzles (no, I'm not kidding).

He brought along a videographer to document the whole thing. 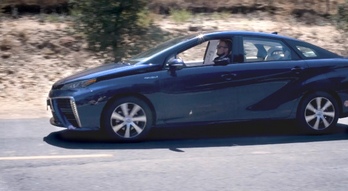 But the real focus of his research isn't the end product; it's the company behind it all.

To get an exclusive look at everything he found and what to expect in the months and years to come from this hydrogen cell pioneer, click here.