Invasions, Sanctions, and Your Portfolio 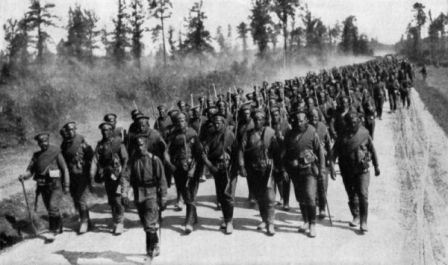 While this article will later describe the potential impact on the global recovery by sanctions imposed on Russia for its incursion into eastern Ukraine, it would be remiss of me not to note the remarkable parallels between the crisis in Ukraine today and the crisis in the Balkans in 1914 – just 1,000 miles and 100 years apart, almost down to the day.

The pattern is so precise it’s spooky. Precisely one hundred years ago down to within a week, on July 28th, 1914, Europe was ablaze. And it started in nearly the same region and under nearly the same circumstances as today’s crisis.

The Austria-Hungary empire had been expanding its influence into the Balkans region of southeast Europe for several decades prior to WWI, ultimately annexing Bosnia and Herzegovina in 1908.

With its sights on Serbia next, Austria-Hungary capitalized on the assassination of Archduke Ferdinand and his wife in the Bosnian capital of Sarajevo - perpetrated by Bosnian freedom fighters backed by Serbian officials - as an excuse to issue Serbia an ultimatum on July 23rd, 1914, designed to draw it into a war.

Not only was Austria-Hungary looking for an excuse to get into Serbia, it also wanted to displace Russia’s influence over the region. A long-time Serbian ally, Russia pushed back against Austria-Hungary’s expanding sphere of influence, ordering the general mobilization of its soldiers in Odessa, Kiev (Ukraine), and Kazan, as well as its naval fleets in the Baltic and Black Seas.

When Serbia failed to give-in to its ultimatum, Austria-Hungary declared war on July 28th. The Great War had begun.

“On 29 July, Russia, unwilling to allow Austria-Hungary to eliminate its influence in the Balkans, and in support of its long-time Serb protégé, unilaterally declared… partial mobilization against Austria-Hungary,” informs Wikipedia.

This drew Germany – a long-time ally of Austria-Hungary – into the quarrel, demanding that Russia keep its nose out of the Austria-Hungary-Serbia conflict and to stop supporting Serbia. Russia refused, and on July 30th ordered a general mobilization against Germany as well.

Germany then mobilized against Russia, declaring war on August 1st. The two main sides of the conflict were thus established – Germany and Austria-Hungary versus Russia and Serbia.

The only major difference between the two timelines is that in WWI the remainder of the allied powers (British Empire, France, and later the United States) allied themselves with Russia, while today they are aligning themselves against her.

But the premise is the same… Europe is expanding into zones where Russia had previously exercised major influence, and Russia doesn’t like it. Both then and now, the big boys are fighting over foreign states where they do not belong, while the voices of the people who actually live there – in Serbia then, and Ukraine now – are largely ignored.

Currently the parallel has entered the mobilization stage. We are just one step away from completing a repeat of history.

In a show of solidarity with the Ukrainian government, the European Union and the U.S. have stepped up economic sanctions against several Russian corporations and state-owned enterprises in an attempt to persuade Russia to withdraw its support for the separatist movement in eastern Ukraine.

Sanctions were increased yet again recently when Russian-trained separatists supplied with Russian military equipment shot down a Malaysian Air civilian passenger jet, killing all 298 persons on board, when it was negligently mistaken for a Ukrainian military cargo plane.

Yet the concern is rising that some sanctions against Russia may actually do more harm to the western nations imposing them.

Take nickel, for instance, which is used to produce a number of steels and alloys, as well as in electroplating (coating metal objects with a thin layer of a different metal). Nickel is a chief ingredient in stainless steel, magnets, coinage, rechargeable batteries, fuel cells, electronic components, and special alloys. The metal is also indispensible as an alloying agent in the extraction of precious metals such as platinum, palladium, silver and gold.

Such widespread use in industrial production makes nickel extremely important to the global recovery, as manufacturing simply cannot do without it. Unfortunately, Russia is the world’s third largest producer of nickel behind Philippines and Indonesia, delivering almost 12% of the global supply.

If sanctions were extended to Russia’s Norilsk Nickel Group – the world’s largest nickel miner – the disruption could be more than western governments bargained for.

“An embargo against Norilsk Nickel as part of Western sanctions against Russia would hurt nickel users in Europe and the United States rather than Norilsk itself,” cautioned the head of French mining group Eramet.
Besides, Norilsk would probably just sell its nickel to China instead, causing no interference to Russia’s economy at all.

“It's unlikely an embargo by Europe would materialise, because it would be shooting itself in the foot, since Norilsk could ship its production to Asia, creating a shortage in Europe and oversupply in Asia,” Eramet Chief Executive Patrick Buffet explained. “The consequence would be a jump in physical premiums in Europe and a discount in Asia.”

Such sanctions would further exacerbate nickel’s already volatile price swings. After falling for nearly three straight years, nickel started 2014 at around $14,000 per ton – its lowest level since 2009 when the global economic recovery began. 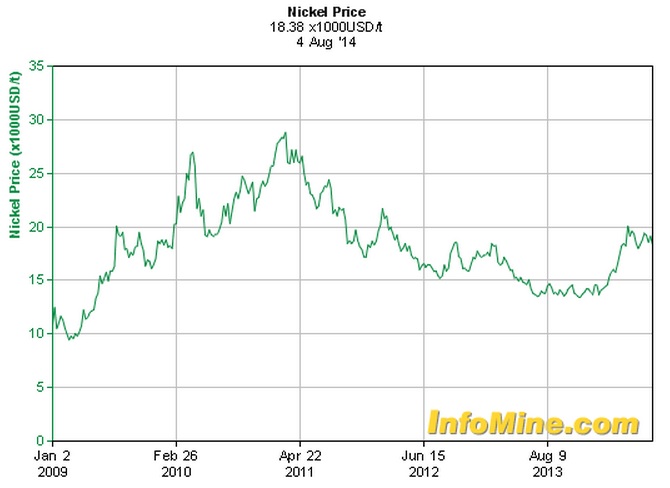 In an effort to push up the price of one its most important exports, Indonesia – tied with Philippines as the world’s largest exporter of nickel – banned the export of the metal’s unprocessed mineral ore in January.
Since Indonesia ships almost all of its nickel ore to China for processing into nickel pig iron (a less expensive alternative to pure nickel), Indonesia was well aware of the falling demand for nickel in China and the world over.

The export ban’s purpose, therefore, was to counter the falling nickel demand and stop its price from eroding further.

As it produces some 440,000 tones of the world’s annual supply of 2.3 million tones according to Statista.com, Indonesia’s self-imposed ban effectively took 19% of nickel ore off the market, resulting in a price spike from $14,000 to $20,000 per ton over the first five months of this year.

With the price back up to 2011 levels, analysts believe Indonesia will soon soften its ban on nickel exports, if not lift it completely. The anticipated higher supply out of Indonesia coupled with the continuing lower demand in China caused the metal’s price to retreat somewhat over recent weeks to the low $18,000 per ton level.

For the time being, it would seem nickel’s price will be range-bound for the remainder of this year.
“Although we believe that the nickel price will remain well supported around the $18,000 level in the second half of 2014, we also believe upside is unlikely to extend well above $19,000 for now,” Walter de Wet of Standard Bank predicted.

Yet de Wet also noted there exists some doubt over the immediate availability of at least 50% of the metal. Not all of the nickel sitting in stockpiles is likely to be available for use.

Nickel stocks at the London Metals Exchange’s registered warehouses reached a record of nearly 318,000 tonnes last Friday. Around one half of this supply is stored in a single warehouse in Jahor, Malaysia. Having so much nickel concentrated in one place brings the availability of those stocks into question.

“As we have seen with zinc and aluminium, if so much metal is concentrated in one location, the metal is often tied up in warehouse or financing deals, hence not necessarily available to the market,” de Wet aroused suspicion.

It is common practice in many Asian countries for companies to import metals, such as copper and nickel, which they then use as collateral to secure bank loans for their businesses. While the recent ban on nickel exports by the Malaysian government accounts for much of the nickel stockpiled in Jahor, financing deals using nickel as collateral might be tying up a large portion of the inventory and effectively keeping it off the market.

This means not all of the metal would be immediately available for the market to purchase when demand finally picks up, potentially causing the metal’s price to surge upward unexpectedly.

There remains, however, just one more factor for metals investors to take into account. Even if the west does not impose sanctions on Russia’s nickel exports into Europe, Russia has already responded to existing sanctions against its corporations by slowing the sale of its gas to Europe, stunting the continent’s manufacturing sector by dramatically raising the cost of energy.

Europe’s economic recovery is now under threat of stalling, lowering the demand for metals and other industrial resources, and keeping prices low in everything except oil and gas. If the scenario continues to play-out as such, metals and materials may not be the place for investors. But energy may be.

That is, of course, unless full-scale war breaks out. In such case, look for a global depression the likes of which we have not seen since the start of the Great War 100 years ago last week.

One hundred years of progress. Where has it all gone?