Will This Fed Meeting Lead to Tapering?

The Pullback is Coming...

There’s a lot of energy in the air. Shopping is keeping people buzzing in the malls, budgeting is keep politicians negotiating in Congress, and a possible Fed tapering is keeping traders speculating on Wall Street. Everything is coming to head all at once in a year-end bonanza of excitement for some and nervousness for others. 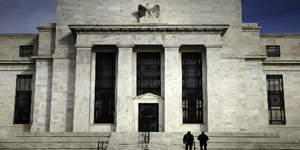 The excited traders are betting the Federal Reserve will stay put on its monthly bond purchases for another quarter – at least until after the January 15th debt ceiling and February 7th default deadlines are cleared – just to make sure the coast is clear before commencing the systematic reduction of stimulus. These hopeful ones are counting on a Santa Claus rally on news of no tapering when the FOMC’s two-day meeting wraps up tomorrow.

The nervous traders, though, expect the Fed will throw the first switch on tapering now. These pessimistic ones expect a Grinch to steal away not only their year-end cheer but perhaps the entire 2013 rally, sending the markets plunging into a severe correction.

Which will be the most likely outcome? Will the Fed taper now or later? Does it really make that much of a difference when tapering begins? And how are investors to ride this one out?

Someone is knocking at our door. Is it Santa... or the Grinch?

The reason it’s so hard to predict the Fed’s decision at this week’s meeting is that there is strong data supporting tapering and powerful worries against it, with analysts at Berenberg Bank – among many – calling it 50-50.

First there came the much better than expected employment report last week, which showed 203,000 new non-farming jobs created in November and a drop in the unemployment rate to 7% – its lowest since the 2008 crisis. This was followed by a very nice Q3 GDP reading of 3.6% annualized growth.

Then came more upbeat data yesterday, with an upward revision of Q3 productivity from 1.9% to 3% annualized and a rise in U.S. manufacturing output to a new all-time record high of 101.3 on the Industrial Production Index, which uses 2007’s peak production as 100 on the scale.

Further supporting robust productivity was an increase in capacity utilization to 79% in November, the highest level this year and third highest since 2008. The economy seems to be firing on all cylinders.

“There are signs of growth here in U.S.” showing “the recovery is in relatively good footing,” Peter Jankovskis, co-chief investment officer at OakBrook Investments, confirmed to Reuters. “The economy continues to show signs of strength and eventually the market will react positively to that,” he expected.

And it did, with the S&P 500 rising more than 11 points on Monday, or some 0.63%. Even though such strong reports signal tapering sooner rather than later, the markets seem to be expecting it will be rather slight at first.

“I think we'll see a $5 billion a month reduction in Treasury purchases announced at the Dec. 18 meeting,” Brian Jacobsen, chief portfolio strategist at Wells Fargo Funds Management, cast his bet to Reuters. “The FOMC views the asset purchases as a way to kick-start the employment gains and we've got that. There is little reason for them to continue purchases at their current pace,” he explains.

But the bond market reacted a little differently than equities did, with the 10-Year Treasury falling initially and its yield rising 5 basis points to 2.89% before buyers started rushing in again. Bond traders don’t seem to expect tapering as soon as this week.

And neither do gold traders, as they pushed gold up on Monday as much as $15 over Friday’s close, before settling up $9.8 on the day. Whether gold’s reaction was due to ECB top banker Mario Draghi’s announcement promising continued monetary stimulus in Europe or simply due to short covering by traders who don’t want to risk being caught on the wrong side of the trade remains to be seen. But the move does indicate that not all are convinced of a tapering announcement this week.

Casting more doubt on a taper is poorer than expected manufacturing data out of China, with the HSBC/Markit China Manufacturing Purchasing Managers’ Index falling from 50.8 last month to 50.5 currently, hitting a three-month low – a strong indication that the global recovery is still struggling.

Even the U.S. reports may not be so hot on closer examination. One reason industrial production has been so high and capacity has been so well utilized lately is because of inventory replenishment in preparation for the holiday shopping season, which happens every Q3. Remove that inventory rebuilding component, and we’re left with a mere 1.9% annualized GDP growth rate for Q3, almost half of the official 3.6% number.

But there’s even more to signal a possible hold on tapering this week as the economic impact of October’s 16-day government shutdown has yet to be reported, with some estimates calling for a reduction to Q4’s GDP of as much as a full percentage point.

And of course, we still have an unresolved debt ceiling issue, as the newly proposed budget deal didn’t even attempt to touch that hot potato. These very same debt limit uncertainties are what held the Fed back from tapering in September. Here we are again in precisely the same conditions as then, with another looming debt ceiling deadline in January and another default deadline in February. If conditions are the same now as they were then, would the outcome of this month’s meeting really be any different?

All this leads Paul Montaquila, vice president and fixed-income investment officer at Bank of the West, to expect no tapering from the Fed this week, although he does expect the Fed to announce its plans and timing for it. “While the Fed should not begin reducing its purchase plan this week,” he predicted to Reuters, “I am expecting some sort of guidance in regards to a tapering game plan.”

Weighing together Monday’s upsurge in equities and steady buying of bonds, director of U.S. research & strategy at TD Securities, Millan Mulraine, assessed to Market Watch that “at this point, the markets seem to be content that the Fed will take a pass on tapering.”

Assessing the Road Ahead

In assessing how risky a tapering announcement this week might be, we would do well to note that the general consensus is divided 50-50. This tells us that since half the market participants expect tapering this week, half the risk is pretty much already factored in. So even if the Fed does taper, the pullback shouldn’t be deep.

Remember too that the Fed has previously stated it does not like the fiscal uncertainty coming out of Congress, taking it upon itself to keep the money tap flowing to counter the government’s tight-fistedness. It seems highly unlikely the Fed will make any significant move when there is still so much debating left to do in Washington. Even if the Fed does move this week, it isn’t expected to reduce its purchases by very much – perhaps only by about 10% or so.

While investors should still remain cautious, trimming profits where possible and reducing leverage on the way up, they should by no means exit the market in any significant way. The road ahead on the other side of tapering is still expected to be pretty smooth, as interest rates will remain at record lows for at least another two years or longer.

The new makeup of the Federal Reserve under Janet Yellen is still decidedly dovish. While several Federal Reserve regional bank presidents have voiced their preference for a beginning of tapering soon, 11 out of 12 FOMC members have all voted in favor of dovish policy for well over a year. When tapering does begin, you can be certain they will not risk destabilizing what they worked so hard to keep stable all this time.

The Fed’s monthly bond purchases are not a game changer. A taper this week or next quarter really does not change the recommended strategy to stay in the market, with a focus on companies and sectors that have long-term growth and income potential. Buy on the dips, and trim profits as you go.

The markets have been anticipating tapering for over 6 months now. They are braced for it already. The impact should be slight.