Will the Fed Save Us... Again?

You gotta love the timing of this stock market correction that has been wreaking something akin to havoc on stock prices the last couple of weeks. By now, you’ve heard the whole “bond yields rise, stocks — especially tech stocks — sell off.”

And the yield on the 10-year bond has indeed ramped higher, currently up to a whopping 1.6%! The strategist types are scared of 1.7%. Apparently, that is the breaking point. They say that if the 10-year Treasury goes higher than that, all hell will break loose.

I don’t know about that. This whole decline “feels” orchestrated by the Big Money trading algorithms. And since those algorithms power 75% or so of all trading, they can push prices in whatever direction the programmers want.

The thing about computer-driven trading is the orderliness of it all. The machines march in one direction until they hit some indicator that triggers a reversal, like the 50-day moving average for the S&P 500 (purple line on the chart below)... 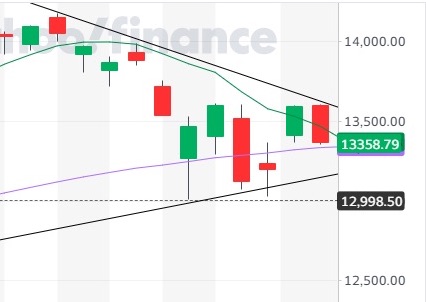 The 50-day moving average is the accepted measure of the medium-term trend for the stock market. It's a significant point on the chart. And every time the S&P 500 hits that line in the sand, the machines stop selling and start buying.

And not just nibbling either — they go all out and you get really big rallies like we are seeing today.

Now, I mentioned the timing of this sell-off earlier. Because there’s really only one man in the world who can open his trap and reassure investors that interest rates are not going to go significantly higher...

And he will not be saying a darned thing until next Wednesday.

I’m talking about Fed Chief Jerome Powell. He’s the man behind the curtain, the Great and Powerful Oz. And he can't start talking until the March Federal Open Markets Committee (FOMC) concludes on March 17, around 2 p.m.

At that time, we’ll get treated to more of the same from ol’ JPow. “Growth looks good, we expect economic activity to pick up as more people get vaccinated. Checks from the Treasury are in the mail, the Fed stands to do what it takes to keep the recovery on firm footing, blah blah blah.”

I kinda doubt that the Fed is going to take any action next week. While we know the Fed very much wants stock prices to stay strong, the S&P 500 is only about 100 points from its highs. You start increasing QE over 100 points, it probably looks like panic.

Think of it this way: Does the big money (I won’t call it smart money) wanna be out of stocks ahead of the strongest growth the U.S. economy has had in 30 or 40 years?

That would seem un-smart.

We’ve known stock valuations are high for months now, especially tech stocks. If you were drawing up a game plan, you’d probably want to take some of the air out of those high-fliers so they have a little room to run.

As usual, I have some thoughts.

I was perusing my watch list over the weekend, which is like 40 or 50 stocks, to see if anything really jumped out at me. A couple of things did.

Streaming music company Spotify (NYSE: SPOT) has been crushed, from $387 to $260 or so. Spotify has won the streaming music battle. It added podcasts a year or so ago and is now the undisputed heavyweight of streaming music.

I love the stock because its customers will likely be customers for life. And Spotify will be able to raise its monthly fee by a buck pretty much anytime it wants to. That’s a pretty good formula.

Qualcomm (NASDAQ: QCOM) is another tech stock that stands out. It’s not a pandemic play like Peloton (NASDAQ: PTON) or even Chewy (NYSE: CHWY). It’s a 5G play, and pretty much no one, except for me and my Wealth Advisory partner Jason Williams, is talking about 5G.

5G is gonna be yuge, and Qualcomm is sitting smack in the middle of it. They say it will have a chip in every single 5G device on the planet.

Qualcomm’s got the devices wrapped up, and Jason and I are recommending an $11 stock that has a big chunk of the network wrapped up. I can’t mention the name here because it is an open position in my Wealth Advisory newsletter. But if you want some info, it’s right HERE.