There’s no denying that Canadian cannabis companies were the “it” stocks of 2018. They spent most of the year ballooning in price, only to come crashing down in the last quarter.

But most of the newsmakers — minus a few exceptions — finished the year with a pretty nice profit despite the wild ride they gave investors. Especially when you compare their gains to the S&P 500 or Dow Jones. And they were no walk in the park this year, either. 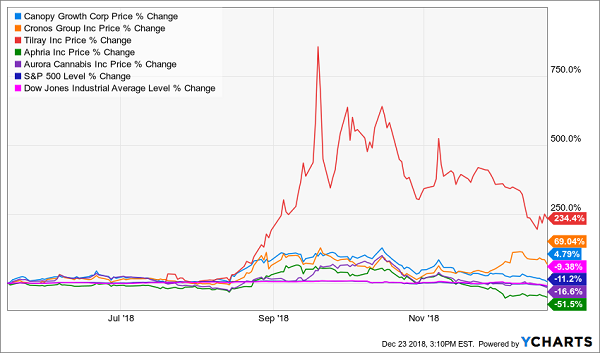 The chart’s a little jumbled, but you can see only two of the major Canadian cannabis companies underperformed the markets:

And there’s still value behind all of these operations. But the biggest gains in the Canadian market have come and gone. Investors need to look elsewhere if they’re hoping for those thousand-percent gains.

Fortunately, we already know where the next cannabis buying frenzy will strike. And we know when, too.

Bringing It All Back Home

2019 will be the year of U.S. cannabis. We’ve got a president in office who’s already made it perfectly clear that he thinks states should make the decision.

We’ve got representatives and senators on both sides of the aisle sponsoring legalization legislation of some sort. And with Congress deadlocked — Democrat majority in the House and Republican majority in the Senate — cannabis legalization may be the only thing D.C. will agree on.

Plus, even if Washington continues to dawdle, more and more states are pushing legalization farther across the country anyway.

The majority of the country supports legalization. The tax revenues would be phenomenal. It’s no longer a pipe dream (pun intended). The U.S. market is going to open for business. And it’s going to happen soon.

So, where can you invest to get in on the early growth stages of a nationwide cannabis market here at home? Well, since it’s still illegal on the federal level, your options are a little limited. And nearly all of the companies still only trade on the Canadian exchanges.

But that doesn’t mean you can’t get in on the action, too. There are typically ADRs (American depositary receipts) that trade on the pink sheets here in the U.S. They're a way to gain exposure to the companies without setting up an international account or converting currency.

And there are going to be some exciting new companies coming to market in 2019. That gives you the opportunity to be one of those early investors who walks away with millions in profits when everyone else finally catches on.

I figure I probably have more time to spend researching private cannabis companies here in the U.S. than most of you.

And I thought it would be nice to help you find some of these gems before other investors even know they’re going to start trading.

So, for the next couple weeks, I’ll be doing a series of articles — starting today — about U.S. cannabis companies with the potential to go public in the coming year.

This week, since I’ve already taken up so much of your New Year’s Eve prep time with my introduction, I’ll just be covering one company.

But as space and time allows, I’ll try to step up the coverage to a couple a week. That way you’ll hear about them all before they announce any stock offerings.

So, let’s get started with the cannabis IPOs of 2019 and take a look at Florida-based cannabis/kitchen tech company Magical Butter.

Back in 2011, a financial planner in Port Richey, Florida, came up with a device that created a completely new market in consumer and commercial kitchen equipment. But all he was trying to do was help out a friend in need.

Garyn Angel’s close friend had been diagnosed with a life-threatening illness. And in Florida, he was legally allowed to use cannabis to alleviate his pain. But due to his asthma, Mr. Angel’s friend couldn’t smoke marijuana. And edibles were hard to come by and far costlier.

So Garyn set about creating a device his friend could use to extract the chemicals from his dry flower and make his own oils, butters, and edibles.

When the device proved successful, Garyn Angel sold his successful financial practice to concentrate full time on expanding his new business. The result was Magical Butter.

When I first heard the name, I was quick to assume it was another edible company. I honestly figured this one just sold cannabutter of various types.

But then I did some research and found out it’s so much more than just butter. Magical Butter created an entirely new market for both commercial and consumer kitchen equipment for the growing marijuana industry.

And since it’s not engaged in anything illegal on the federal level — it just sells the equipment, not the cannabis — it can operate across state lines. That means every person in the world who wants an easier and cheaper way to medicate is a potential customer.

The flagship product and main revenue generator is a device that allows patients to put all the ingredients for their butter in at once, set a few buttons, and walk away. When they come back, they have perfectly infused butter or oil.

It’s like a bread machine where you put in the flour, water, salt, and yeast. Then you let the machine do the work and enjoy your fresh bread when it’s all done.

You can check out the company’s “How To” video here. It’s really impressive how easy they’ve made the whole process.

The starter kit comes with everything you need to make your very first batch — minus butter and weed, of course. One doesn’t ship well in cardboard. The other can’t be shipped across state lines legally. 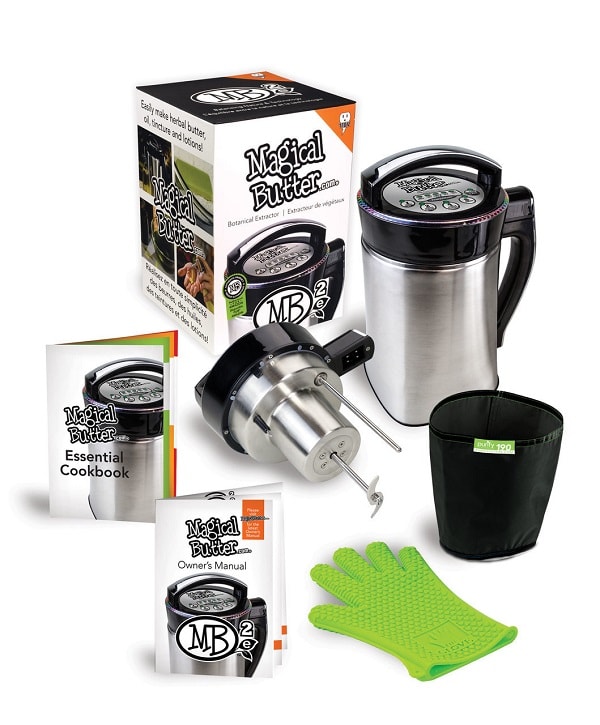 It retails for $175 on the company’s website, www.magicalbutter.com. And there are tons of accessories you can pick up to make the process easier or get more creative.

And the response has been outstanding. Customers love the product, and sales have grown quickly.

Since the first prototype in 2011, Angel has grown the company into a multimillion-dollar operation.

In 2017, the company brought in more than $7 million in sales. And it’s already one of the most well-known cannabis brands in the country.

Coming Soon to an Exchange Near You

Magical Butter may not have truly massive revenues yet. But its management has major plans. And it’s quite likely they’ll be taking the company public on the Canadian stock exchange early in 2019.

I couldn’t find any figures as far as 2018 revenues, but assuming the company tripled them and we’re looking at $21 million, that’s still microcap range.

Keep in mind, though, that Tilray had about $20 million in revenue the year before it debuted. Its IPO price of $17 gave it a valuation of $153 million.

But within a few weeks of trading, it was valued over $20 billion. Granted, that valuation didn’t last, but even after a massive drop, shares still trade nearly 250% above the IPO price.

Not a bad two-month gain.

A Bad Case of History Repeating?

Now, I’m not saying Magical Butter is going to follow the same path as Tilray. I hope it doesn’t.

Tilray was a bubble stock. Speculators drove it through the roof. And reality brought it crashing back down.

But I know because of the industry, because of its sensitivity to news and rumors, and because of the small size of the companies in it, we’re going to be in for a bumpy ride with U.S. stocks, too.

The major difference is they’re coming to market with real revenues. They’ve got years of history as private companies. And they’re operating in an existing industry.

When Canadian stocks first came to market, legal cannabis was still a fringe thing. Now it’s right in the focus of the mainstream’s attention. And we’ve already seen how big the industry can get within just a single state.

Because of those facts, I expect American cannabis stocks to be a little more “well-behaved” than their Canadian counterparts.

I know. It’s a pretty drastic change from how things normally are when comparing us to our neighbors up north. But in this case, I’m convinced it’ll prove true.

Still, it’s a new market. And these are new companies. They’re all small. And they’re all going to be volatile.

But if you’re looking for major cannabis gains without the roller-coaster ride, I may have the perfect investment for you...

It’s a U.S. cannabis company. And it already trades on U.S. exchanges. In fact, it’s always traded here. But nobody noticed it until very recently.

And although it did get caught up in the frenzied buying of 2018, it kept most of the value that got pumped into it.

And that’s because it’s such a lucrative investment. It’s up over 100% for the year. But its shareholders didn’t have to stomach the wild swings other cannabis investors did.

And, to add a cherry on top of an already delicious sundae, this company guarantees to pay you income as long as it’s bringing in money.

You can learn all about it by watching this presentation. Or, if you prefer to read about it, you can get a report right here.

I’ll be back next week with more potential cannabis IPOs to look for in 2019.

Have a safe and happy New Year’s Eve! I’ll talk to you next year.