Where Gold Goes from Here

The End Is Nigh

Written by Christian DeHaemer
Posted May 14, 2013

Here is a ten-year chart on gold.

The uptrend since the bottom of 2008 has been broken.

The highs are not as high. The lows are now lower. 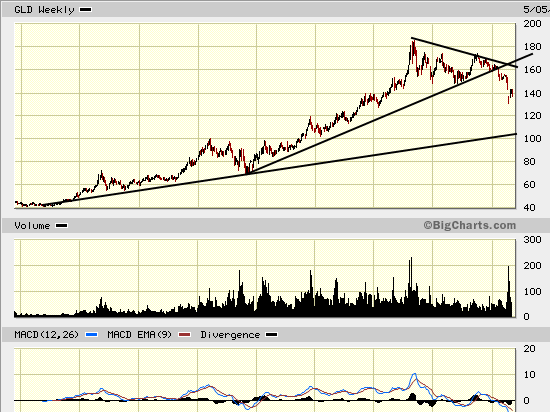 If it bounces off the next trend line, that would put the price of gold around $1,150 per ounce by the end of the year.

That's not good for the paper gold longs, at least in the short term.

But it could be good for those of us trading options on commodities...

Reasons for the Fall

The economy seems to be doing better. That is, if you can believe the numbers.

Last week, those looking for jobless benefits dropped to the lowest levels since 2007. If you take into account the number of people actually employed hasn't increased, one can find some solace in the fact that companies aren't firing anymore.

Yesterday, retail sales came out at 0.1%, which was more than the 0.3% that Reuters said the market was expecting. And business inventories were unchanged.

None of this data shows an expansive economy, nor one that is going off the cliff.

For five years, investors were told that the world was going to end. The profits of doom were legion.

But alas, despite the rise in zombie culture among the youth, the end isn't nigh...

What has happened is the stock market has doubled and is hitting record highs.

It is no wonder that money managers withdrew $1.27 billion from gold and precious metals funds last week.

Bloomberg reports this year’s outflows of $20.8 billion are the largest withdrawals since the firm began tracking the data in 2000.

But, as I wrote last week, there is a discrepancy between physical gold and paper gold.

Demand in China drove an 8% gain in physical prices from a two-year low. And Indian imports hit 100 tons in April. This is after importing 860 tons last year.

Don't get me wrong; there could be a significant bounce in the future.

I expect we will see increased volatility for the remainder of the year.

Japan might be the catalyst that sends gold higher, as that country could see a bond market meltdown of epic proportions.

Already, the yen has fallen 13% this year and is now below 100 to the dollar for the first time in seven years. And like a see-saw, the Nikkei 225 stock average is now at the highest level since 2008.

But Japan also has the largest debt to GDP ratio in the world at some 260%...

Logic would dictate that more stimulus and money printing would cause the bond markets to lose faith in the yen at some point.

Of course, some investors have been saying this for twenty years.

P.S. Remember a few months ago, when I told you that the National Bank of Greece (NYSE: NBG) looked like a good buy under $1? It is now trading at $1.52. Just write your thanks on the back of $100 dollar bill and send to...