What’s the Deal with Yield?

Don't Let Inverted Curves Get You Down

If you’ve been paying even a little attention to the markets this week, you’ve likely heard the term “inverted yield curve.”

It seems to be tearing the world asunder with its rage. But what is it? And why is it so powerful?

Before I go any further, let’s get better acquainted with the topic on a lot of lips...

What Does That Even Mean?

When you compare the short-term rate to the long-term rate, the longer term is usually higher. That’s normal. People expect a higher return the longer their money is locked into an investment.

You expect to get paid a higher rate to loan your money out for 30 years than for one quarter.

Inversion is simply when the short-term rate gets bigger than the long-term one.

But when these forecasters of doom talk about the yield curve inverting, they’re not talking about the difference between one quarter and 30 years. They're not even comparing one year to 20 years...

But the thing is, two years isn’t really short. And in the grand scheme of things, a decade ain’t that long.

That Depends on Your Definition

Even in the bond world — where most of the guys talking about the curve come from (and where I got my start at Morgan Stanley) — those aren’t the real rules...

When you’re talking fixed-income investments like bonds and Treasury bills, two years can count as short term. But so can three months. And that’s a lot closer to most investors’ understanding of a short holding period.

And 10 years? Well, that’s the outside edge of what they’d call a “medium-term” investment. Those last from five to 10 years.

At least that’s the definition when they’re explaining how to invest in fixed income.

But as soon as they see this difference between the two-year and the 10-year start to shrink, they go all Chicken Little and claim the sky is falling.

They don't explain how long their "short term" really is. And they change their own definition of what "long term" is to suit their narrative.

And the tale they spin is a gloomy one for sure...

They’ll tell you that when the two rates switch places, it’s a sign the markets are going to come crashing down.

When the short-term rate surpasses the long-term one, recessions typically follow. It's a sign that investors are nervous and demand a higher return from shorter investments. That means people are worried and getting ready for economic weakness.

But if you’re looking at the two-year rate and the 10-year rate, it gets a little tough to predict when the recession will happen.

Here’s a chart of the two over the past 40 or so years. Recessions are in gray. 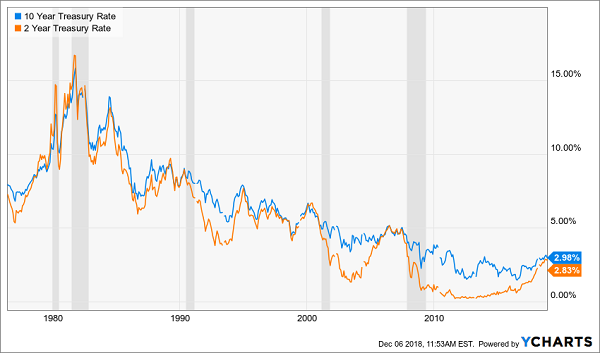 You’ll notice that the curve does, in fact, invert prior to recessions.

Not a great forecasting tool if you ask me.

But I’m not saying the difference in short-term and long-term rates isn’t important to watch. I’m just saying you’ve got to use real short-term investments and real long-term ones, too.

To me, three months sounds a lot more like a short-term investment. Locking my money up for two years seems like a while — at least medium term.

So let’s take a look at the three-month Treasury rate versus that 10-year and see how it stacks up... 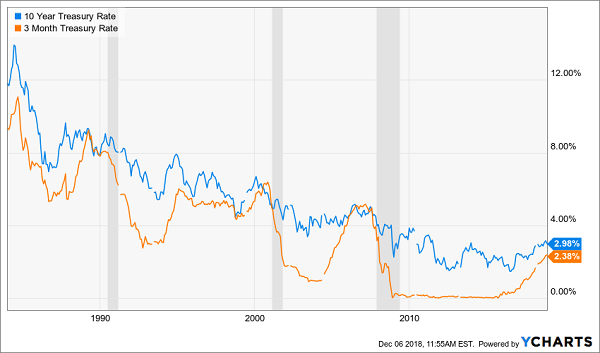 OK. I like that. We’re getting a little better. The curve inverts before the recessions. And it’s not throwing false positives anymore.

But it’s still hit or miss on the timing.

In the early 1990s, it’s a few years early. And it actually reverts to normal before the recession hits.

It pretty much nailed the dot-com bust. But it was early for the Great Recession. And it reverted to normal before the bad times really set in once again.

But I had a feeling that would be the case. Because 10 years isn’t really long term. Sure, it’s a long time. But when we talk about long-term investments, we’re talking decades, not years.

So, the 30-year Treasury rate might be a better indicator of what folks want from a real long-term investment.

And when we replace the 10-year rate in that last chart, we get a much better look at short-term versus long-term borrowing and lending: 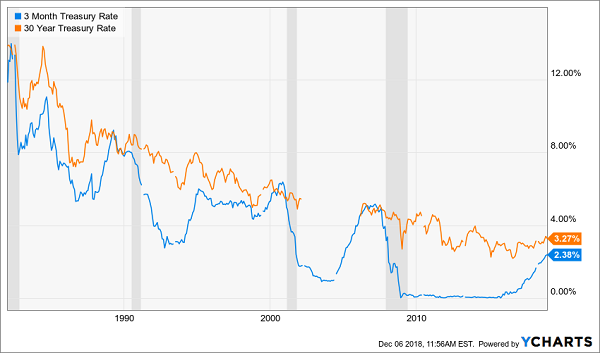 It’s still not perfect. But it’s closer than either of the others.

It stays inverted during the early 1980s turbulence. It inverts and stays that way a couple years prior to the early 1990s. It nails the dot-com crash and the Great Recession. But it still reverts before the 2008 crash.

And it’s still not throwing any false positives.

Like I said, it's not perfect. But I’d say that’s about the best we’re going to get as far as using historic Treasury rates to predict the future.

And as you can see by the numbers at the end, there’s still a good difference between the two rates — a solid 1%. They’ll call that 100 “basis points” in the bond world because that sounds bigger.

But it is a really big difference. And they need to drive that point home because 1% just doesn’t seem that massive.

That 1% tells me we’ve still got a ways to go until we need to worry about a stock market crash or an economic recession.

Stick with a Winning Game Plan

And that’s why I’ve been advising the members of my investing community to keep that skin in the game.

We’re not out of this bull market yet. And some of the biggest gains come at the end of runs like these.

So sitting on the sidelines is going to cost way more profit than it’ll protect.

But I’m also advising them to keep some cash on hand to buy companies that are getting hit by unfounded fears of a coming recession.

They’ve taken profits from our stocks after rallies and reinvested when the market pulled back.

One excited member wrote in to let us know he’d taken our advice and was sitting on $11,000 in pure profit from just one of our stocks. And he’s already bought back in for the next rally.

Another reached out to let us know that her portfolio is up over 40% this year thanks to our timely advice. And she’s going to retire early!

That’s the kind of feedback that keeps me coming into work every day. It’s what motivates me to find the best investments. It what makes me put in the extra work to find stocks that go up faster than the market but manage to drop slower during rough times.

And it’s what led me and my colleague, Briton Ryle, to uncover an amazing opportunity that’s been paying off for our investors the entire time the markets have been going up, down, and sideways this year.

I’d like to share it with you, too. If you’re still worried about a recession or crash, this is the kind of investment you need in order to sleep soundly at night.

It’s in a practically recession-proof industry. And it spins off cash no matter what the current economic state is. In 2018, it’ll pay out over $1 BILLION to investors.

And recession or not, it’ll be paying out even more in 2019 — almost half a billion more, to be precise.

I can’t fit all the information into this email, though. So you’ll have to click this link to get the rest of the details.

But trust me when I tell you that you’ll be happy you did.

If we get hit with an economic hurricane, you’ll have a cushion of cash. And if the markets keep running higher — as I predict they will — you get the added cash plus capital gains. It’s a win-win. They’re real.

So check out this presentation, or read our report here. And get yourself set up for success in any market.