What Medicare for All Means for Your Health Care... and Your Portfolio

I’ve said it before and I’ll say it again: Investing based on party politics is a bad idea. And betting on the election is an even worse idea.

But you know what else is a bad idea? Not having health insurance.

Yet roughly 8.5% of Americans go without it — and a growing number of left-wing voters, activists, and politicians are fed up that that number isn’t 0%.

As a result, Medicare for All has become the most visible issue of this election cycle, and it’s worth considering how a shift toward socialized health care might affect your financial situation.

After all, based on Google Trends data for the search term “Medicare for All,” the idea isn’t going anywhere anytime soon — regardless of what happens in 2020. 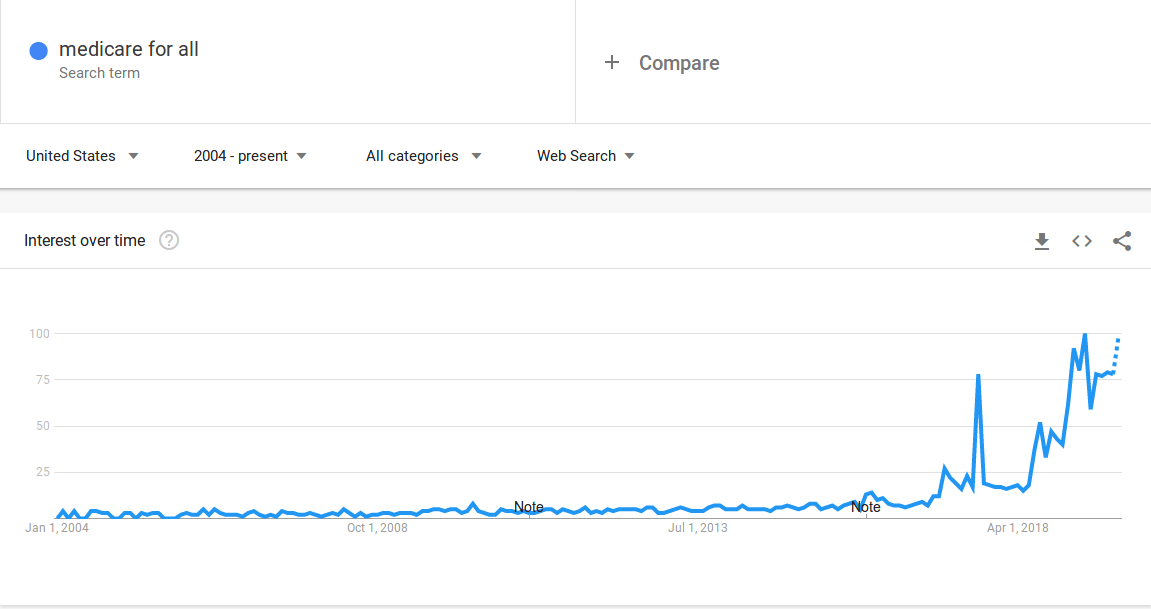 Today, we’re taking a deep dive into how the various Democratic health care reform proposals on the table today could impact your care — and your portfolio.

What Exactly Does Medicare for All Mean?

You’d think the term would be self-explanatory, but it actually refers to a wide variety of left-wing health care reform proposals.

All “Medicare for All” plans represent some sort of shift toward a publicly funded universal health care scheme and away from the privatized, market-based system we have today.

Some, like the single-payer plan championed by Senators Bernie Sanders and Elizabeth Warren, would put everyone on a government health care plan and effectively abolish private insurance.

Others, like the plan promoted by Mayor Pete Buttigieg, would simply allow Americans to buy into existing government health care plans like Medicare and Medicaid, leaving private insurance plans intact.

Almost all would involve a drop in the number of people relying on private insurance, as well as some regulation of health care prices. But as you can see in the chart below, those two features are the only things the various “Medicare for All” plans have in common. 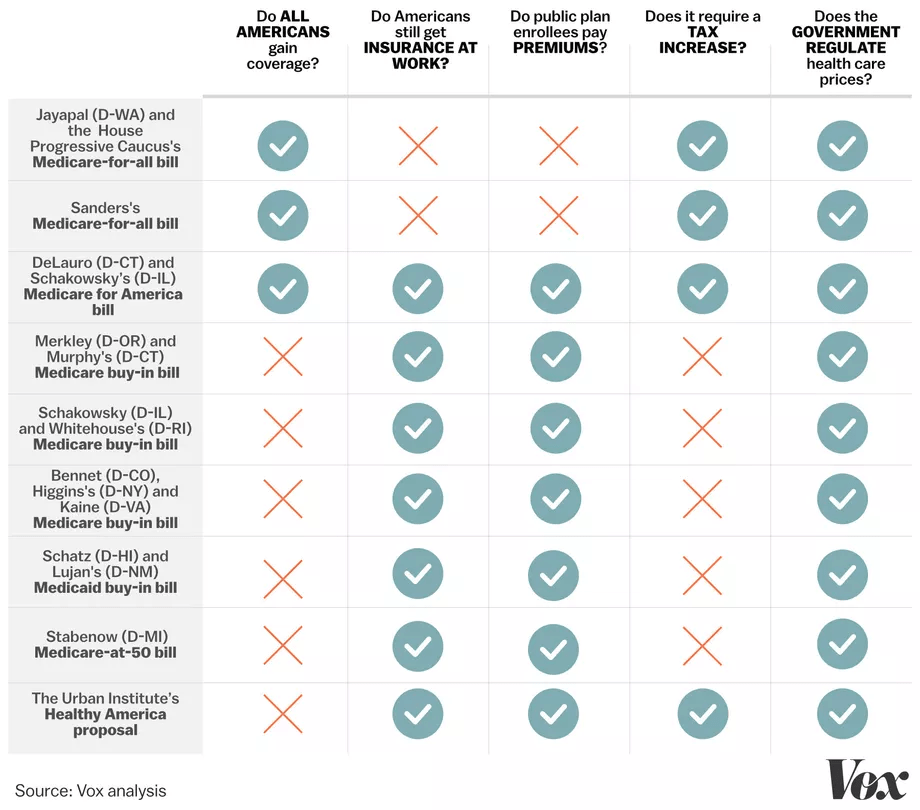 So how would these policy proposals affect your health insurance situation — and your portfolio of health care stocks?

What Kind of Health Care Plans and Stocks Would Survive Medicare for All?

As we will discuss in a moment, there’s a decent chance that your health insurance policy would be eliminated — or at least radically reshaped — by the comprehensive, single-payer Medicare for All proposals backed by the likes of Sanders and Warren.

But there’s one type of health care-related financial instrument that would likely still be just as useful and popular in a single-payer scenario: the health savings account (HSA).

How do we know this? One word: Canada.

Our neighbors to the north have a single-payer health care system, but they still love what they call “health spending accounts.” This one-word difference in the name — “spending” vs. “savings” — is more or less the only difference between Canadian and American HSAs.

Like their American counterparts, Canadian HSAs allow workers to deposit tax-free funds into a bank account through their paycheck and then make tax-free withdrawals from that account for qualified medical expenses like prescription drugs and private medical bills.

A double-digit percentage of the Canadian population has some kind of HSA, suggesting that you’d probably still be able to keep these accounts under even the most radical Medicare for All regimes. That would mean major HSA providers like HealthEquity (NASDAQ: HQY) would still have solid investment potential.

Drug companies would obviously take a hit from any Medicare for All policy; after all, a common feature of these proposals is government regulation of treatment costs.

Some name-brand drug companies could be looking at a 30% price reduction, according to Raymond James analyst Chris Meekins. But others — especially generic drug makers — might not actually be affected much.

Medicare as it exists today gives generic drugs preferential treatment over name-brand drugs. It pays up to 75% of the cost of generics, even when patients are in the coverage gap.

And even the Sanders/Warren Medicare for All proposal would preserve this payment system, providing generous government payments to generic drug makers and allowing them to charge patients for any unrecouped costs.

With this in mind, a fund like the VanEck Vectors Generic Drugs ETF (NASDAQ: GNRX) could serve as a safe haven to biotech investors in the event that a single-payer Medicare for All policy becomes law.

What Kind of Health Care Plans and Stocks Wouldn’t Survive Medicare for All?

Sanders and Warren have explicitly said that their Medicare for All plans would require the government to provide coverage for all essential care to every American and that they would abolish private insurance except for supplemental plans covering non-essential care.

That would mean it’s probably curtains for publicly traded insurers like UnitedHealth Group (NYSE: UNH), Anthem (NYSE: ANTM), and Cigna (NYSE: CI). These insurers — and their plans — would likely survive under a Buttigieg-style Medicare buy-in policy, but they’d still take a hit from the loss of policyholders who choose to ditch them in favor of a public option.

It’s also unclear whether many rural hospitals would be able to survive a transition to single-payer health care. Many administrators have said that their facilities wouldn’t be able to stay solvent if they received the Medicare rate for every patient.

About two-thirds of patients using the company's two critical-access rural hospitals are covered by either Medicaid or Medicare. The government pays the hospital 99% of allowable Medicare costs, says Peter Wright, who runs the company's Bridgton and Rumford hospitals.

That means — hypothetically — if an X-ray costs $100, Medicare will reimburse the hospital $99.

On the other hand, he says about a quarter of his patients use private insurance, which pays well above $100 for the same X-ray.

"If you're talking about Medicare for All and turning every one of our patients into a Medicare patient, we'd probably end up closing our doors eventually," he says.

If Wright’s theory turns out to be true across the nation, then hundreds of rural hospitals could be shuttered under a single-payer health care regime. That, in turn, could kill publicly traded rural hospital operators like Tenet Healthcare (NYSE: THC).

Once again, a Medicare buy-in policy wouldn’t be as dire for rural hospital operators, but it would still likely hurt them.

Wealth Daily is not in the business of promoting political positions — we have no horse in the race when it comes to the health care debate. And under most circumstances, we’d discourage you from factoring politics into your financial decisions at all.

However, we are just 358 days from the 2020 election at the time of this article’s publication. And the most heavily discussed policy proposal of this election cycle would fundamentally transform our economy, your health care, and your portfolio.

In the event that pro-Medicare-for-All Democrats take Congress and/or the White House next fall, it would be wise to open an HSA and to concentrate your health care investments on HSA providers and generic drug makers.

But in the meantime, while our current market-based health care system is still in place, there are plenty of opportunities to net big short-term gains on health care companies.

Small-cap biotech stocks in particular have delivered some incredible profits to investors, and Topline Trader director Jason Stutman has been tracking them diligently to help his subscribers cash in on the latest drug approvals. In just a few weeks, he will be hosting a webinar to let you in on all the details of the network he uses to pinpoint these profits.

Mark your calendar for November 21, and keep an eye on your email for more information.