What Happens When Recession Hits?

It's going to happen. There's no way to avoid it. At some point, the U.S. economy will hit a recession. GDP will shrink, earnings will decline, and people will get fired.

That's how economies work — they expand as businesses invest and people take on debt and buy stuff. And then they seemingly hit a wall, people pull back on spending, and businesses follow suit, and everything tanks for a few quarters.

The only real uncertainty is when. When does the U.S. economy hit that proverbial wall?

It's been eight years since the stock market bottomed on March 10, 2009. And it's been eight years of virtually uninterrupted bull market. Sure, there have been some pretty good sell-offs. There was the EU debt crisis, the Greek bailouts, and the Chinese economic slowdown...

The Fed has kicked off a couple stock market sell-offs: first when Bernanke tapered the QE3 bond-buying program, and again when Yellen hiked interest rates.

Through all of these potential bombshells, the U.S. economy has chugged along, putting up consistently weak ~2% growth numbers. Even a record string of employment gains hasn't been able to shift the growth needle higher...

So it's no wonder that people are getting more and more concerned that a U.S. recession is imminent. If you can't get growth to accelerate, well, there must be underlying problems that are preventing the economy from operating efficiently. It's like we've been running on borrowed time, and that time is running out...

Of course, there are underlying problems with the U.S. economy that are preventing it from firing on all cylinders. We have been relying on financial engineering to fuel growth. The Fed made money cheap by squashing interest rates under the misguided hope that companies would borrow money and invest it for growth.

The Fed got the first part right: companies have borrowed money. The corporate bond market has gone ballistic over the last few years. But companies haven't invested the money in growth. Instead, they've bought back their own stock and raised dividends.

But it's not "real" growth. Corporate revenues aren't really growing. Earnings per share grow because there are fewer shares out there after companies buy them back. But overall revenue? Not growing. In fact, revenue hasn't really grown in years. It peaked in late 2011: 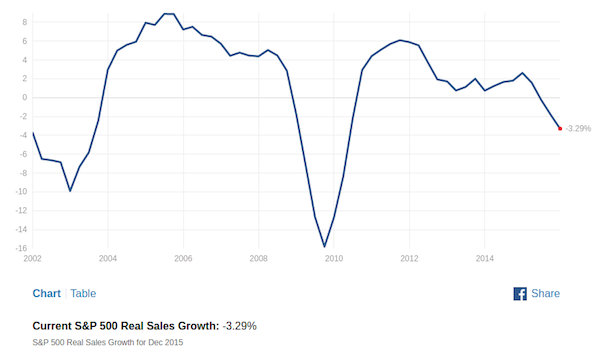 When you look at a chart like this that clearly shows revenue for the S&P 500 has been in decline for years, well, it makes you wonder how the U.S. economy hasn't already dipped into recession...

Close to the Brink

The truth is the U.S. economy has come very close to a recession several times in the last few years (a recession is defined as two consecutive quarters of negative GDP growth). Most recently, growth went negative for the third quarter of 2015, and the first quarter of this year narrowly escaped being a negative number.

You're not wrong if you think it won't take much to tip the balance firmly into negative territory.

Oil embargos (1970s), financial crises (2008–9), terrorist attacks (2001), and sky-high interest rates (1980s) are the type of shocks that have caused the last few recessions. It also helps to have an economy that's vulnerable to shocks. Like when 9/11 happened, the U.S. economy was already reeling from the popped Internet bubble. It just needed a small push to fully melt down.

In 2008–9, the economy was incredibly leveraged to a housing bubble. A small tick lower in home prices set off a wave of defaults that once again crushed the economy.

So what's it going to be this time? What kind of fundamental shock will we see push the U.S. economy into recession?

Frankly, it doesn't take a lot of imagination to come up with some catalysts that could send the U.S. economy reeling. Swing a dead cat, and you'll probably hit several...

There's China. If that economy seriously implodes, well, that would probably do it...

There's terrorism. Given the success that the ISIS wing nuts have had getting into Europe, we can't rule out their potential of infiltrating the U.S. I don't worry so much about illegal Mexicans coming over the southern U.S. border. I worry way more about terrorists coming in that way...

There's debt. I don't mean government debt. I worry more about corporate and household debt. Seems to me we are pretty much at full employment, and the economy can't grow. What happens when layoffs tick up and employment growth wanes? We could see spending dry up quick, and that S&P 500 revenue chart I shared with you earlier takes a nosedive...

So those are a couple things that could go really wrong. And there are a lot more. To make matters worse, I am having a harder and harder time coming up with positive catalysts for the U.S. economy. We've been in an eight-year sweet spot to get some good growth going, and it hasn't really happened.

Make a note: Goldman Sachs downgraded U.S. stocks to "neutral" this morning. That's not a sell signal, exactly. And it's fine if you want to question Goldman Sachs' motivation for such a sweeping action (could they be short?). But don't ignore the potential for an increase in headwinds for the economy... and the stock market.