Weekend: A September to Remember

Welcome to the Wealth Daily Weekend Edition — our insights from the week in investing and links to our most-read Wealth Daily and sister publication articles.

Thank goodness that’s over with...

I was beginning to think that I’d never be able to wear my smiley face button again.

According to the National Bureau of Economic Research, the longest recession since World War II officially ended in June 2009 or a full 16 months ago.

The bad news is that nobody really believes it.

And why would they?

As this chart from Gluskin and Sheff's David Rosenburg shows, it really is different this time...

What is supposed to be up at this point is still down across the board. 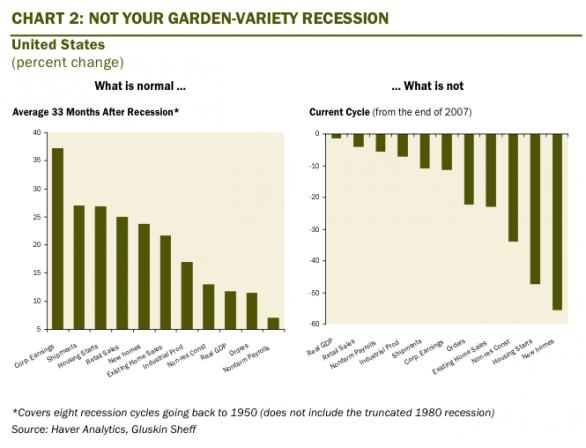 Instead, what is happening this go-round is actually just the opposite, giving credence to the “new normal” that the Pimco boys love and investment guru Ken Fisher finds so “idiotic.”

Meanwhile, the combination of globalism and big government is working to kill the goose that laid the golden egg, otherwise known as the middle class.

To that end, please consider the following set of statistics from "The Economic Collapse" entitled "15 Shocking Poverty Statistics that are Skyrocketing as the American Middle Class Gets Slowly Wiped Out":

#1 Approximately 45 million Americans were living in poverty in 2009.

#2 According to the Associated Press, experts believe that 2009 saw the largest single year increase in the U.S. poverty rate since the U.S. government began calculating poverty figures back in 1959.

#3 The U.S. poverty rate is now the third worst among the developed nations tracked by the Organization for Economic Cooperation and Development.

#4 According to the U.S. Department of Agriculture, on a year-over-year basis, household participation in the food stamp program has increased 20.28%.

#5 The number of Americans on food stamps surpassed 41 million for the first time ever in June.

#6 As of June, the number of Americans on food stamps had set a new all-time record for 19 consecutive months.

#7 One out of every six Americans is now being served by at least one government anti-poverty program.

#8 More than 50 million Americans are now on Medicaid, the U.S. government health care program designed principally to help the poor.

#9 One out of every seven mortgages in the United States was either delinquent or in foreclosure during the first quarter of 2010.

#10 Nearly 10 million Americans now receive unemployment insurance, which is almost four times as many as were receiving it in 2007.

#11 The number of Americans receiving long-term unemployment benefits has risen over 60 percent in just the past year.

#12 According to one recent survey, 28% of all U.S. households have at least one member that is looking for a full-time job.

#15 One out of every five children in the United States is now living in poverty.

As millions more Americans climb on to the "safety net," how long will it be before it breaks?

Good question. Unfortunately, it's not one we typically ask 16 months after a recession has ended...

Even still, the bulls have been able to put up a September to remember.

For the month, the Dow Jones Industrial Average gained 7.8% in the market’s best showing since 1939 (which oddly enough coincides with Hitler’s invasion of Poland starting WWII — read into that what you will).

Nonetheless, with the helping hand of the Federal Reserve, the markets are off the mat again since it’s now clear any further weakness in the economy will be met with aggressive quantitative easing.

That has the hearts of the gold bugs all a flutter.

And why not? QE2 is music to their ears as gold now appears to be headed to the $1500 mark.

But it’s not just gold.

Commodities across the board are rising in response to the Fed and all of its new dollars. One of them is palladium, which appears to be on the verge of a major break to the upside.

In fact, my pal Luke Burgess called me last week to talk about his latest palladium find. It’s a junior mining company that could earn you an easy ten-bagger as the price of palladium skyrockets. I encourage you to read his report.

As for some other places to invest your hard-earned labor, here are a few of the best investment ideas from the pages of this week's top-read Wealth Daily and Energy & Capital articles.

Big Gains to Be Found in New Vaccines: The Next Leg of the Biotech Bull Market
Editor Steve Christ takes a look at a ground-breaking new vaccine technology and explains how it could make your portfolio 1,000 times healthier.

Investors vs. The Machines: The Rise of the Robots
Analyst Adam Sharp examines the rise of algorithmic trading and its disturbing implications for everyday investors.

Rare Earth Metals: Three Ways to Play Chinese Intimidation
Editor Ian Cooper uncovers why rare earth is at the center of controversy again, and offers three ways to profit from it.

Global Cleantech Legislation: Profiting from the Whining Schmucks of Congress
Editor Nick Hodge calls out Congress on stalled energy policy and offers ways to profit from a country that is fully embracing the cleantech future.

Peak Coal Theory: Profit from the Peaks
Editor Ian Cooper explores the peak coal theory, and delves into how much quality coal we may have left.

WTI Crude vs. Brent Crude Oil: Bracing for a New Benchmark
Editor Keith Kohl reveals oil's next global benchmark and how investors can profit from it.

Bull Market Mania: Ground Floor Investing In Gold
Editor Luke Burgess explores highlights of China's booming gold market and puts you on the trail of a mining pick for the ages.

Uranium Up on Kidnapping: Grab This Bottom as Prices Surge
Editor Christian DeHaemer points out that uranium prices have turned — time to grab hold of this market bottom with both hands.

Nuclear Powered Profits: This One is Money in the Bank
Editor Nick Hodge uncovers the truth behind a nuclear power story that has been buried by the mainstream media.