How a Drought Can Make it Rain Money

Heavy rainfall has brought some relief to the U.S. water crisis, especially for many areas suffering from drought in the southeast. Even so, the Carolinas, Tennessee, Georgia, Alabama and Florida haven't moved out of what are being called ‘exceptional drought conditions.'

Of course, this is a political and financial problem as much as it is a meteorological one. And last week, talks between Florida, Georgia and Alabama to solve a 20-year old water dispute turned into another failed attempt.

Here are the bare bones of the dispute surrounding the Florida Panhandle.

Obviously, it's a battle over critical water resources that are increasingly scarce in the Southeast. And to make matters worse, Atlanta—one of the regions largest cities—has been growing at a rapid rate for the last three decades. Of course, its demand for water has grown right along with it.

Serious water woes began in the area in the 1980s and in 1990 Florida and Alabama went to court to battle what many dubbed "Georgia's Water Grab."

Recently, as drought caused water problems to escalate to a water crisis and Atlanta's source of water—Lake Lanier—dipped to dangerously low levels, the debate has once again heated up.

Background on the Water Crisis

Lake Lanier was created by the completion of the Buford Dam on the Chattahoochee River in 1956. Its original purpose was to provide hydroelectricity and flood control.

But as Atlanta's population blossomed, Congress authorized the city to take water from the lake for drinking water purposes. That was supposed to be an incidental use of the lake, but you can imagine what happened...

As more and more water was taken from the lake, Florida and Alabama became increasingly concerned. They are, after all, entitled to an equal share of the river's flow by Federal law.

Since the dispute is between several states, Secretary of Interior Dirk Kempthorne, recently stepped in. He brought with him the experience of negotiating water rights in the arid west, a part of the U.S. facing a similar plight.

But after three months of talks, Kempthorne declared the talks dead and now it looks as if the three states will have to take their battle all the way to the Supreme Court.

Solutions to and Profits from the Water Crisis

"Why is it so hard for the states to come up with an agreement?" That was a question posed concerning this topic the other day on National Public Radio.

The answer was that each governor has to safeguard the best interests of their respective states. And when the parties involved are together they all talk about finding common ground, but when they get home and discuss the issue with their farmers and water managers, changes the entire dynamic.

That has led Georgia Governor Sonny Perdue to say the other U.S. states don't understand how important the water is to Georgia. And, of course, the other governors feel the same way about the water crises their states are facing.

That has led to the now prevailing view in Florida and Alabama that Georgia is still unwilling to take the tough steps needed to address a water shortage that's not going away.

If you remember, Georgia's water shortage has even led them to try to change their border with Tennessee so the Nickajack Reservoir and part of the Tennessee River would be inside their boundry.

This is just a microcosm of what's going on in other parts of the country and around the world. And I can tell you one thing for certain: there won't be any more water available tomorrow than there is today.

Like energy, we can't make it or destroy it. We can only find different ways to harness it and use it more efficiently. And that's what these states are going to have to do to avoid an even more serious water crisis. That's why I like the investing in water angle so much.

You can invest in water by playing utilities, parts manufacturers, infrastructure companies and many more. 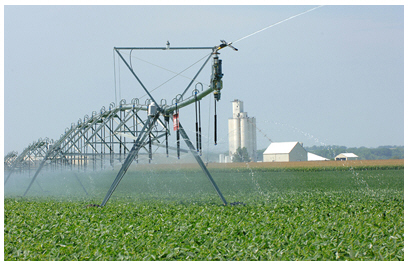 With a particularly acute drought in rural farming areas, I like Lindsay Corporation (NYSE: LNN)—a water company stock that's been in the Green Chip Water Index for quite some time now.

The company's claim to fame, so to speak, is the invention of center pivot technology for crop irrigation equipment—the giant sprinklers you can see in fields across the country.

But Lindsay's latest models are truly a modern marvel. They use much less water and energy and can be moved by remote control. So in addition to saving farmers money on water, labor and energy costs, the devices also save vital natural resources.

The company has absolutely exploded as more and more agriculture business realizes how significant their product is. The stock is up more than 135% since early 2007. In fact, I believe it's the new John Deere of the ag world.

Green Chip Stocks members knew about this company long ago. In addition to my recommendation of water-related companies, visit Alternative Energy Speculator to find out more about the world's most lucrative commoditiy.