Warren Buffett is a long-term value investor. He finds companies that are undervalued, buys up lots of shares, and holds them for a really long time. In fact, he’s been known to say that his favorite holding period is forever.

But that doesn’t mean he’s opposed to making a quick profit. If a company meets his strict criteria for being a value investment and he can influence one of the companies he's got millions invested in to buy it, that's all the better.

By now you probably heard about Warren Buffet’s attempted buyout of Unilever.

He scooped up millions of dollars in shares of Kraft Heinz and then tried to get Unilever into its portfolio, for a few reasons: One, it was undervalued by the market. But more importantly, it was primed to make a ton of cash in the future and make his investment a tidy profit.

Like I said, Buffett’s not one to shy away from a quick profit. He’s made his fortune by holding stocks for decades to capture the power of compound interest and dividend payments. But he’s not afraid to be an activist investor and make some fast cash, either. So, it’s understandable that he was quick to get onboard with a Unilever buyout.

But the company didn’t do what Buffett wanted. Word of the takeover leaked, and the stock shot up 22%. And management there rebuffed the multibillion-dollar takeover attempt. The high price and management challenge led Buffett to walk away from the deal to look for something better. And Unilever remains a standalone company.

Now, he’s on the lookout for another takeover candidate. And I’ve found his next potential target. It’s a by-the-book value investment. It’s in a perfect place to make shareholders a ton of money and to be bought out by the Oracle of Omaha as he tries to capture its gigantic share of the market.

Management at this company has spent the last three years focusing on becoming more efficient and cutting the costs that have been keeping revenues from flowing to the bottom line as profits. They’ve done a great job so far and are keeping the trend going this year, too.

Plus, the company has a rock-solid balance sheet and valuation to make the rest of its industry jealous.

It’s trading at a 41% discount to its peers on a price-to-earnings basis. And its enterprise value to future EBITDA (earnings before interest, taxes, depreciation, and amortization) — my favorite valuation metric — is substantially lower than the rest of the industry, too.

It’s not the most exciting name in the market — not some tech company with the latest and greatest gadget... not some pharmaceutical with a new medicine getting ready to disrupt the medical field — but that's a good thing. It’s going relatively unnoticed by a lot of investors, even while stock prices cruise to all-time high levels and Warren Buffett gets set to make an offer.

It’s primed to see some serious growth to its operational cash flows this year thanks to the cost-cutting programs management has put in place over the past few years. And although it’s trading at the top of its historical level, it’s still not an expensive stock — not when compared to the rest of the industry, and not even compared to its own historical valuation.

That’s what Buffett’s next target does. And it’s the reason the company has been in business for a century and a half. Simply put, this company makes things people love. And it’s never done a better job of making them and getting them into the hands of the consumer.

The company is best known for its dominance in the consumer goods sector. It makes and sells a stable of products that people buy no matter what the economic outlook is. In fact, to say it’s got a well-balanced portfolio would be an understatement. No one segment makes up more than 20% of its total sales. 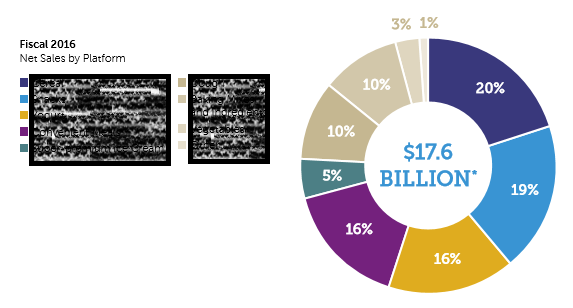 And demand is growing for all of its various categories.

In fact, while other companies in this industry were feeling a pinch on the top line last year, Buffett’s next target grew revenues every quarter. As cost-cutting methods and wise investments began to really pay off, it continued its multi-year trend of providing higher shareholder returns than the S&P 500. Plus, it continued a solid record of growing earnings per share. 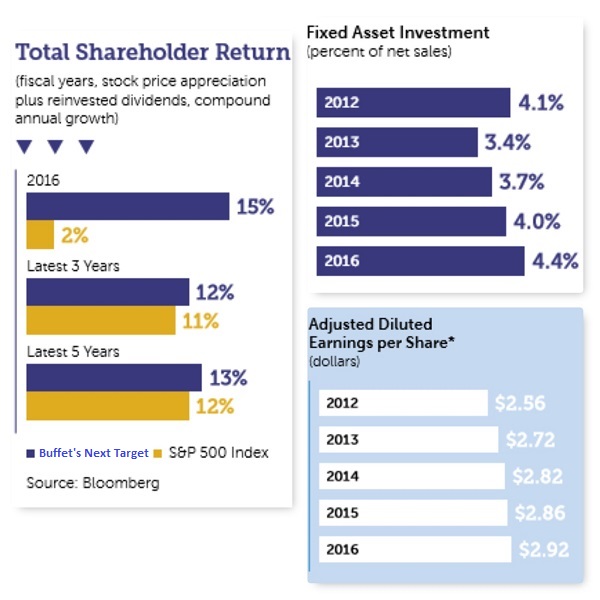 This company incorporated nearly a hundred years ago. Ever since, it’s had a tradition of growing both the business and shareholder returns.

That’s the focus of the 48th longest trading stock on the exchange. It’s what they do. They grow the business because that’s what’s going to insure the company is around for at least another century, and they grow shareholder returns because that’s what keeps investors happy.

Management also grows dividends. They’ve shared the profits with investors for the past 24 years without missing a dividend payment once. And they’ve hiked that payment every year without fail for the past 13 years. Neither of those traditions is coming to an end anytime soon.

Last year the company paid out over $1 billion to shareholders in the form of dividends. This year, it’ll be even more. That’s because management gave investors another raise last year. Now they’re paying 8% more per year. That’s an extra $84 million-plus that will be flowing directly to shareholders’ bank accounts in 2017.

But dividends aren’t the only thing growing at Buffett’s next target. The company has also been growing earnings and operational cash flow (the money left after paying to run the business) between 3% and 4% per year as well.

I know 3% to 4% doesn’t sound incredibly exciting. But when you factor that kind of continuing growth into a long-term investment horizon like Buffett does, you get really high returns. Over the past 34 years, the company has brought shareholders gains of around 2,000%. And that’s not counting the dividends they’ve been getting for 24 of those 34 years. Add those in, and you’re talking about a profit to make any investor jealous.

What’s more interesting about this company is that it's a prime candidate for a buyout. Now that Warren Buffett’s attempt to take over Unilever is nothing but a memory, he’ll be looking for another likely acquisition.

And this company is a perfect fit. It’s got some debt, but not too much, and its coverage ratios are outstanding. There’s enough cash in the bank to cover the quarterly dividend payment more than five times over. And the annual operating cash flow (CFO) covers the interest payments on the outstanding debt plus some. In fact, the CFO is about 900% of the annual interest payment. That’s low debt with lots of cash to cover it and then some.

The supremely discounted valuation makes Buffett’s next target a likely takeover candidate, too. You already know it’s trading at a 41% discount to the rest of its peers from a price-to-earnings standpoint. But its enterprise value (takeover value) is discounted, too. It’s a good 6% cheaper than any of the other companies in the industry.

All that adds up to a company that’s hard to pass up, especially when you really want to get into the industry it heads.

That’s why I’m certain this is the next target Warren Buffett, the Oracle of Omaha, has in focus. It’s a value investment that fits all of his criteria for a forever investment. And it’s a prime candidate for a buyout bid from a savvy investor like Buffett.

I’m so certain that this company is the next one to get the golden touch from Warren “Midas” Buffett that I recently recommended it to my subscribers at The Wealth Advisory. They’re already set up to ride a wave of acquisition profits right to the bank. And I want you to have the opportunity to do the same.

Since I just shared Buffett’s next target with my paying subscribers, it wouldn’t be fair for me to give it away here for free. But for less than the cost of an Omaha steak dinner, you can get access to this company and many others that are earning Wealth Advisory readers huge profits.

And those are only a handful of the most recent gains. There are even more just waiting for you.

So, if you want to get in on the profits — and in on Warren Buffet’s next takeover target — just click here and you can get access to all of them and more.

Don’t wait until the rest of the market catches on and drives the share prices up like Unilever. Get access now and ride the wave of interest along with my current readers.

To investing with integrity (and the inside track),