Crises from Both Sides

Turkey has long been a bridge between two worlds, where East meets West. And its culture has reflected the beauty and charm of both hemispheres.

But lately, Turkey’s economy has also been reflecting the troubles of both hemispheres, particularly the financial instability to its West and the political turmoil to its East.

Can Turkey endure the tempests whipping upon it from both sides? Or will it finally collapse like a bridge whose pillars of support are finally torn apart?

A Beacon in the Darkness

For decades, Turkey’s economy shone like a bright gem in the midst of gloom all around. Its growth has been phenomenal, with GDP rising from a mere $68 billion in 1980 to an astounding $1.1 trillion in 2012. (click to enlarge) 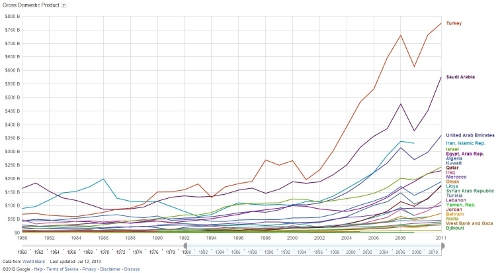 Turkey now holds the top GDP spot among all its 21 neighbors in the Middle East/North Africa region, ahead of even Saudi Arabia and other oil rich exporters. Even when compared with European nations, Turkey’s GDP still ranks in 8th place, nestled between the Netherlands above it and Switzerland below.

And Turkey has managed this without an oil export industry. In fact, Turkey is almost entirely dependant on oil and gas imports to satisfy a full 97% of its energy needs.

So how did the nation manage such growth? By reducing state involvement in basic industry, banking, transportation, and communication, a growing middle class of entrepreneurs was liberated to apply itself to free enterprise. Turkey’s export market, once restricted to traditional textiles and clothing, rapidly expanded into the electronics, construction, automotive, and mechanical equipment industries.

Yet Turkey’s place as a bridge between two continents suddenly charged a toll on its economy, as the global recession in the opening years of the new millennium tossed Turkey into a severe financial crisis in 2001. The setback, however, turned out to be a mere re-grouping. After fiscal and financial reforms with the assistance of the IMF, Turkey emerged from its crisis with a force that propelled it to the top of the charts, averaging 6% annual growth from 2002 to 2008.

After succumbing again, this time to the global crises of 2008-09, Turkey once again impressed the world with an unmatched robustness that reached an enviable 9.2% GDP growth in 2010. It was a jaw-dropping catapult to the skies.

But the financial and credit crises of 08-09 are far from over for everyone – including the Americas, Europe, Asia, and now Turkey. The nation has always had a high dependence on foreign direct investments, which have been slowly drying up as both East and West face liquidity shortfalls.

To combat this rapid inflation, the central bank had to raise interest rates last month by 75 basis points to 7.25% to strengthen its currency – the Turkish lira – increasing its buying power and thereby minimizing the effect of inflation. The country also needs the higher rates to attract foreign investment, which is sorely needed to finance its deficit.

But the problem with high interest rates is that they slow economic growth, as Turkish companies will now have to pay more interest on borrowed capital, and consumers who also face higher loan and mortgage rates will have less money left over to spend.

Anticipating the slow-down, Turkey’s Finance Minister Mehmet Simsek announced immediately after the raise in interest rates that his nation’s GDP growth forecast of 4% will have to be lowered, though he did not specify by how much.

“[U.S.] Fed decisions and the international market conditions have triggered risks for a (growth) downgrade,” Simsek blamed in his speech.

What is this? Is he really blaming the U.S. Federal Reserve? Much of the recent drop in value of the Turkish lira has come from all the talk of the U.S. Fed’s plans to taper stimulus in America. Reducing stimulus strengthens the USD, which in turn weakens other currency values against it.

The Turkish central bank is now on an opposite course to nearly all other Western central banks. While the West is loosening monetary policy to cheapen the cost of money, Turkey finds itself in the unenviable position of having to tighten monetary policy to increase the value of its lira so that foreign investors won’t pull their money out.

“The central bank will act with determination to take all necessary measures,” the Turkish central bank’s recent press release promised. “We have always supported all investors who have capital in Turkey, and we shall continue to do so.”

It seems this third bout with financial crisis since the turning of the century will likely be lost by Turkey and many other nations like it who are highly dependent on foreign capital inflows to fill their budget gaps.

Economists are already predicting huge interest rate hikes for Turkey in particular. Analysts at England’s Barclays (NYSE: BCS) bank are expecting that if the U.S. Federal Reserve goes ahead with stimulus tapering in September, the Turkish central bank will have to raise interest rates by a full 1% to 1.5% in very short order.

Independent macro-economic research company Capital Economics estimates that by the time the U.S. Fed finally eliminates its monthly bond purchases by mid-2014 as expected, Turkish interest rates may have to rise a whopping 5% from the current 7.25% to a potentially crippling 12.25%.

With 3% GDP in 2012 and a likely lower growth rate in 2013, it is almost inevitable that Turkey will enter recession by the time the U.S. Fed terminates its bond buying program in 2014.

Such is the world in which we live: budget deficits highly dependant on foreign investment that just isn’t there anymore; currency devaluation wars among wealthy nations triggering inflation and interest rate hikes in middle-tier economies; aggressive export agendas driving all policies simultaneously with no one to do the buying.

It seems it is up to the largest economies to get their work done more quickly. The faster the behemoths of the world can get their accounts and budgets in order, the sooner the middle-tier nations like Turkey can return to their glory days of stellar growth and expansion.

It kind of gives us a greater sense of urgency knowing there is a long line behind us of others needing a recovery too.