Donald Trump was elected President of the United States of America on Wednesday, November 9, 2016.

Much to the surprise of pundits and the chagrin of detractors, the U.S. stock market not only extended its record bull run, but seemed to accelerate. Between the day results were announced and the start of 2018, the Dow Jones Industrial Average rallied nearly 40%.

Analysts, authors, newscasters, everyone was more than a little shocked. But we were all content to go along with it. I mean, who argues with gains?

But as we move further into his presidency, it’s starting to look like that bump might turn into a slump.

All Good Things Must End

The Trump Bump carried the market up to multiple new high levels. But it set the highest mark on January 26th, less than two months ago. That marked a 50% rally since The Donald’s election.

But it may have also marked the end of the run and the start of the “Trump Slump.”

You see, Donald Trump may understand how politics works. And he obviously knows how to win the national popularity contest that presidential elections have become.

But he doesn’t seem to have much of a grip on classical economics. And that became glaringly clear last week when he announced a new round of potential tariffs.

Now, don’t get me wrong. I’m all for encouraging the growth of American industry. But one of my degrees is in economics, and I spent years studying the effects of things like tariffs on economic growth.

Spoiler alert: They’re not good for anyone.

Another Word for Taxes

Before we get into the negative consequences of tariffs, let’s talk a little about what they are. And that’s a tax.

Yep. That’s right. Tariff is just a fancy word for a tax on a product from another country. Tariffs are usually calculated as a percentage of the product’s total value, including shipping charges.

In the case of steel and aluminum, you can think of it like this: The extra taxes on imported steel and aluminum will make it cost more for U.S. companies to buy foreign steel. So they may decide to turn to steel made by manufacturers based in the States. And if they keep buying the foreign steel, that extra tax fills up the government’s coffers.

Now, that may sound like a good thing, but what it really does is raise the price paid by whomever the end user is.

When it’s something like steel or aluminum, then everybody who uses steel or aluminum pays the tax. That means everyone who drives a car, owns a cell phone, drinks soda or beer from cans, or does a myriad of other things will be paying more.

It also supports inefficient industries. If American steel manufacturers can’t produce steel for sale in the U.S. cheaper than foreign companies, then the American companies aren’t efficient at making steel. It’s that simple.

Encouraging inefficiencies is not a way to encourage economic growth. And it’s certainly not going to make America great.

You see, when you enforce tariffs to make an inefficient domestic industry competitive on a global level, you create what’s called “deadweight loss.”

Deadweight loss is simply a cost to society caused by market inefficiency. And it’s unrecoverable. That means once it’s gone, it’s never coming back.

In economics, the relationship between tariffs (or any taxes) and deadweight loss is shown on a supply and demand chart. 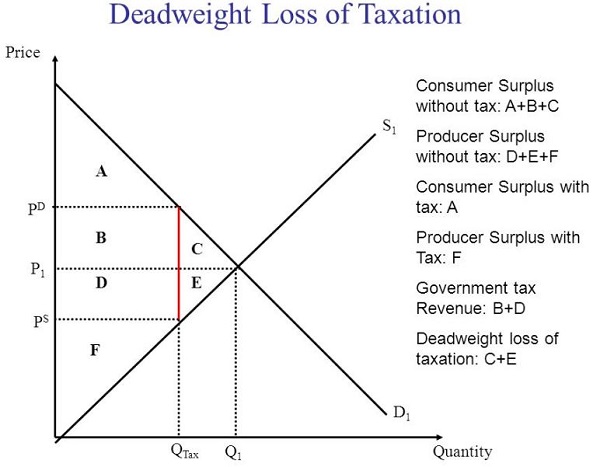 Here, price is on the vertical (or y-axis) and quantity is on the horizontal (x-axis). The line S1 denotes the supply of a given product. D1 is the demand of that product by consumers.

It is the perfect price for the product as determined by a free market. If price were to go higher, demand would shrink. But if price were to drop, supply would fall as well. At the equilibrium point, both customer and producer are satisfied.

But when you add a tax like the tariffs President Trump is suggesting, that equilibrium gets thrown all out of whack. Now, the point where demand and supply meet is unreachable because the tax adds cost without adding value.

With the added tax, the new equilibrium quantity (QTax) is far lower. Consumers demand less of the product since they must pay more for it. And producers supply less of it because it costs them more to make.

The government gains some revenue from the tax. But some of the benefit of the whole transaction is lost forever.

And producer surplus is made up of the areas D, E, and F. Producer surplus, like consumer surplus, is the extra money made by selling a product for more than the lowest price you’d be willing to take.

But once we introduce the tax, consumer surplus is carved down to just area A and producer surplus becomes area F. Areas B and D get shifted to government revenue — the extra money from the tax — and areas C and E disappear entirely.

The loss of C and E is the deadweight loss. It’s value that’s gone, never to return. And it’s a drag on the economy of all parties.

And the worst part is that one tariff inevitably leads to more...

You see, when a country like the U.S. levies a tax on imports from other nations, those nations aren’t usually too happy about it. And they can (and typically do) respond with tariffs of their own.

And that’s what we call a trade war. It’s literally two nations bickering like children about who did what. It’s a tit-for-tat. You hit me so I’m going to hit you back.

What ends up happening during a trade war? Prices rise across the globe. Inflation hits the combatants’ citizens. Industries, even those intended to be protected, suffer. And the major cost is passed off on consumers like you and me.

And thanks to Mr. Trump’s announcement last week, even our closest allies are threatening retaliatory tariffs on American exports.

Bruno Le Maire, France’s minister of finance, said that the tariffs, if enacted, “would lead to a strong, coordinated and united answer from the European Union.”

And Chinese officials have said they’d do what’s needed to defend their markets, too. They’ve even hinted at retaliating with tariffs on U.S. soybeans exported to China — about $12.4 billion last year.

So, before you go jumping on the tariff and protectionist bandwagon, look at the long-term consequences of that kind of policy.

The losses in the long run far outweigh the paltry short-term gain they might bring.

In the end, the only truly efficient global economy is an open one.

To your wealth (and your surplus),

But chances are it’s already having an impact on your life.

It’s called digital health, and it has the potential to completely change health care as we know it.

In fact, over the last few years, doctors, hospitals, and health insurance companies have all been racing to implement this technology in their services.

But there's one company so far ahead of the pack that it's already cornered a staggering 75% of the market!

While all the big players in the industry are scrambling to catch up, this small tech company will be scaling up its services by 1,766%!

And it's not too late to get a piece of the action!

The resulting $29 billion increase in revenue is practically guaranteed to hand investors a massive payday...

Click here to find out how this explosive new company could hand you 900% profits in 2018!