Here we go. The trade war is ON!

You see Boeing shares getting whacked today? Yeah, Boeing made the Chinese hit list. Automakers and soybeans, too. Every Dow Industrials stock is in the red. Yeah, I know it's just 30 stocks. But it's a decent cross-section of the economy.

Now, there's always at least a little concern in the air when the Dow's down 400 points. And when those numbers hit 600 and 700, concern starts getting a little panicky...

Because when the losses mount, we all start to wonder if there's something truly disastrous bubbling right below the surface. If you were around for the 2008–9 financial crisis, you know what I mean. Stocks were getting crushed, and it took a long time to really get a handle on what had gone so wrong...

Back then, the whole counter-party issue regarding mortgage-backed securities was a totally new thing. One minute Bear Stearns is fine, the next it's bankrupt. The Fed and Treasury were playing Whack-a-Mole as each new crisis emerged from its hole.

This is part of the PTSD that I think still plagues the market. It's the "not knowing." And it's reasonable. There's always something we don't know. Worse, sometimes we don't even know what we don't know, as Donald Rumsfeld would say.

Over the last decade, we've seen the fear of the "unknown unknowns" snowball a few times. There was Greek debt. Then Euro debt. Then negative interest rates. Then Brexit. We could easily imagine how each of these could spread like wildfire. But they didn't.

Right now we've got a pretty wicked combination of "unknown unknowns" going bump in the night: Chinese trade war and interest rates. And they are working together. Trade wars can cost jobs and raise prices. And rising interest rates soak up liquidity. Play these out, and you get stagflation, deflation, recession, depression...

Add in a stock market that isn't cheap and is mainly driven by machines, and you can get some pretty big down days.

Now, before you sell all your stocks, hear me out. This may not be the disaster that so many commentators are making it out to be. I mean, it's not good, despite what our fearless leader says.

And it seems to me that part of the fear over all this is directly related to how Trump speaks. Boisterous, demanding, arrogant...

Not the best qualities, I suppose. But more than those, Trump is often uninformed or downright wrong. Just look at his rant against Amazon from the last few days. I'd have to take off my shoes to count the number of articles I've seen detailing how Amazon’s deal with the U.S. Postal Service actually works. (Yep, I even read a few...)

Trump won't read these articles. He won't listen to advisors who try to tell him the truth. And he won't change his opinion. He might stop tweeting about it, but he won't change it.

Trade partners should be on somewhat level ground. Friendly, even. That's not really the case with the U.S. and China. For the last 15 years at least, China's protectionist monetary and fiscal policy has been an issue. And no one has been able to force them to change. No one's really tried. Until now...

When Trump first started talking about tariffs on Chinese goods, I had two thoughts: One, he must be crazy to think protectionist trade policies can work, and two, a trade war could easily kill the bull market.

I want you to know that I've changed my mind. I don't think Trump is using tariffs as protectionist measures. I think he's trying to force China to negotiate. Earlier today, China's Deputy Finance Minister Zhu Guangyao said, “Now both sides have put up our lists. We believe both countries have the ability and wisdom to address the problem.”

So are we really heading into a trade war with China?

Seems to me it's a long shot. I mean, yeah, Trump's a wingnut. Can he really singlehandedly get us into an escalating trade war with China? I doubt it. There are massive economic forces that can — and will — be brought to bear on policy if he persists.

Imagine the CEOs of Ford, Boeing, America's biggest employer Wal-Mart, the biggest company Apple, and the biggest bank JP Morgan, along with Warren Buffett on one side... and Trump and Wilbur Ross, with his ridiculous can of Campbell’s Soup, on the other. It's an intellectual bloodbath.

So, strip away their trade war bogeyman, and I am left with this:

Yes, analysts never anticipate recessions. No one is factoring in any trade war damage, either. But you should know that earnings estimates tend to get lowered as earnings season approaches.

Right now estimates are going up. Earnings start next week (JPM and C on Friday, April 13). The S&P 500 is sitting right on its 200-day moving average. And Relative Strength (top indicator) is oversold... 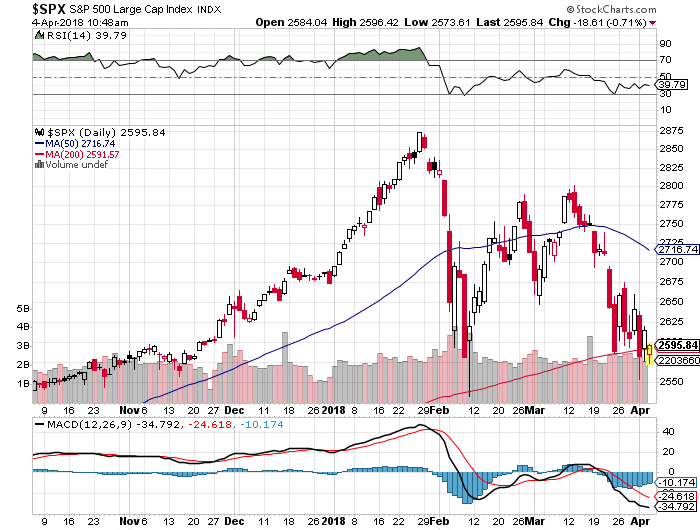 Conclusion: Stocks are likely to rally.

And if you're looking for a trade, I really, really like Micron Technology (NASDAQ: MU) right here. My Real Income Trader subscribers made 120% the last time we traded Micron, and we're back in for another run.