March is here. And if I can, I just wanna say that I'd be fine with more lamb and less lion.

As a younger man, I actually used to like March. It meant spring was right around the corner and I could start working on my golf game...

Now I hate March. It's left me hanging too many times. The romance is over, and I'm not falling for March's lies anymore.

True to form, March acted like a real jerk over the weekend. It dumped snow and ice on the northern states. We got a little snow here in Baltimore before it turned to a cold rain. I stopped griping about the Baltimore weather when I saw what had been delivered to Alabama...

I heard on the news that people had less than 20 minutes to take shelter before that F3 tornado ripped through. I can't imagine how scary that must be. I have said several prayers for those affected.

Surprisingly, March actually delivered something positive over the weekend, too. Rumors started swirling that a U.S./China trade deal is nearing completion.

Now, we've been through this countless times over the last six months or so. Markets rally on some unnamed source saying there's solid progress being made. And then maybe the president comes in with some tweet that undermines the whole thing...

Remember Tariff Man? The S&P 500 had just rallied 160 points after Thanksgiving. Then, on December 4th, he let this chestnut fly: 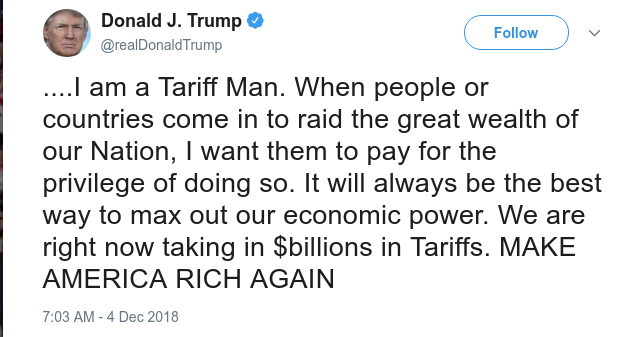 I don't know if it was the implicit promise that the trade war is far from over or the profoundly wrong notion that the U.S. makes money from tariffs that did it. But whichever it was, that tweet singlehandedly kicked off a 20% beat-down over 15 trading days. Brutal.

It was about that time that I started wondering if members of the Trump administration were swing trading the S&P 500 with put and call options. I still can't think of any other reason the tweets could run from hot to cold so fast...

Anyway, here we are. The rhetoric seems to be getting more one-sided.

I'm not sure any stock has taken more of a trade war beating than FedEx (NYSE: FDX). September highs were $255. The stock was still $230 when Tariff Man emerged. It finally bottomed at $152 on December 24th.

FedEx released earnings during that brutal period. The shares were crushed — down $30 in a day. And the CEO really ripped the president for interfering with trade. (Interestingly enough, my article about it came out on Christmas Day, as the market was bottoming.)

Analysts have lowered FedEx numbers by ~10% across the board. So FedEx now trades with a forward P/E of 10. That's cheap, and the stock is gonna run when it reports earnings on March 19th. And this is one that looks pretty good for a call option...

And One Chinese Stock

It may well be that Chinese stocks are the big winners from a U.S./China trade deal. Because if you think the S&P 500 has been acting bullish, you should see the Shanghai Comp...

It's moved straight up this year. And this move is likely more than just an imminent trade deal...

The Chinese economy has been struggling for over a year now. Just last night, I came across a Bloomberg headline that says China's car market is in the biggest slump in a generation.

But a series of stimulative policies and rate cuts have been put in place. Add in a trade deal, and maybe China's economy is getting just what it needs.

There's a Chinese real estate company listed on the NYSE. It's not just Chinese — it is currently completing projects in Manhattan and London. It's solid and pays an 8% dividend.