A Walk Down the Gold Value Chain

Last week they told me Fidel Castro was in a vegetative state, or may have even died.

The rumors had been circulating for a few weeks, and our favorite Fidel death play went from $7.00 to $7.80. 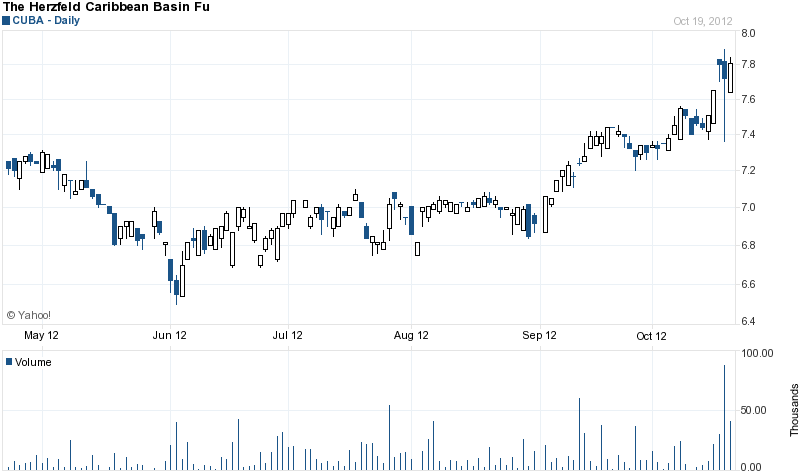 The Herzfeld Caribbean Basin Fund (NYSE: CUBA) has been trading around $7 for about $15 years. It was first founded to take advantage of the end of the Cuban embargo. Though its investments are indirect at best, it acts like as a trade on the end of the Castro regime.

On Friday I received some emails from jokers regarding one of my 2011 predictions. Number ten was: Fidel Castro dies.

In the recap a year later, I wrote: “This was a dumb prediction. Clearly, Castro will never die.”

And true to form, the zombie Castro lives on...

Today we have news that Castro wrote an article for a state website saying: “I don't even remember what a headache feels like." He also released a photo to show "how dishonest" the rumor mongers have been.

But we are not here to praise Castro; we are here to bury him. According to Genocide Watch, the Castro regime was responsible for between 35,000 and 141,000 deaths through 1987.

There are worse dictators to be sure; Fidel doesn't hit the murderous level of Hitler or Pol Pot.

Still, most right-thinking people will be happy to spit on his grave.

Here at Wealth Daily, we are long on gold.

(Personally, I will be long and strong until real interest rates are above the rate of inflation, but that's another article altogether.)

For the more nuanced investor of gold — those of us who go beyond hording coins in mason jars — take a look at the following chart...

These are three ETFs. The GLD (green) reflects the price of gold; the GDX (red) is the gold miners ETF; the GDXJ (blue) is the junior gold miners ETF: 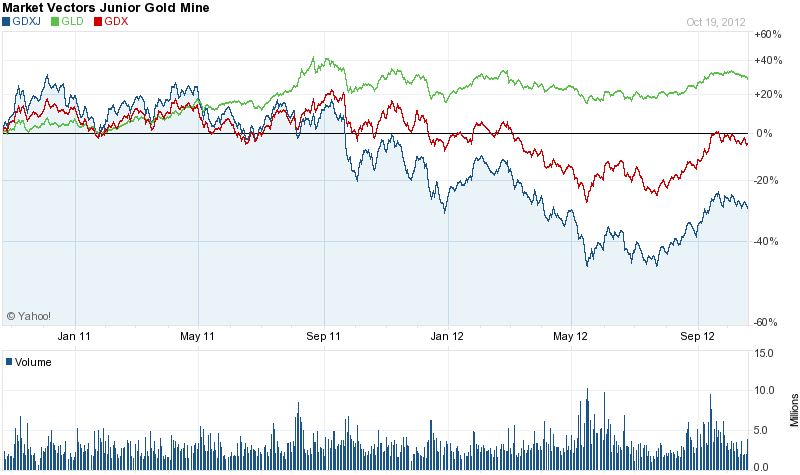 Miners and junior miners are leveraged to the price of gold. This means when the gold price goes up, miners go up more.

Junior miners would have an even higher beta and rise the most. They also sell off the most.

As you can tell in the past year and a half, when gold was flat or down, the miners sold off... and when gold came back in August, the miners went up more than the price of the metal.

This is an opportunity to buy gold miners on the cheap.

The smart money is flowing into the juniors.

According to ETF Trends: “Gold prices rallied from late summer into early fall and this is when gold mining stock ETFs outperformed the price of gold, however, when gold prices dropped, miner stocks got beat up.”

The money is chasing the little guys. Year to date, GDXJ has seen inflows of $1.1 billion in assets, while GDX has seen money inflows of $772 million.

If you believe (as I do) the price of gold is headed higher, you will make more money from buying the junior gold miners as they return to the mean.

That said, I would not buy GDXJ, nor GDX.

The reason is simple: There have been a host of mining strikes in South Africa.

Just today AngloGold Ashanti Ltd told its 8,000 man workforce that it must return to work or face dismissal. The company is faced with 32,000 ounces a week in lost output.

And these strikes have a tendency to get violent.

I've put together a report detailing three North American gold miners that will benefit from the rising price of gold as well as the stall in production from their competitors. You can find them here.

Indian festival season is upon us.

According to the Hindu Business Line: “Gold sales generally grows considerably during over a month-long festival season, which comprises Dussehra on October 24, Dhanteras on November 11, followed by Diwali on November 13.”