This Is When the Market Reverses

Could the stock market reverse to the upside soon?

That’s what everyone’s wondering, from the average Joe to Joe Biden.

According to Bankrate’s October Economic Indicator Survey — a poll surveying the top economics analysts — the economy isn’t looking so hot.

Here’s what it found:

Just to reiterate, 65% means that two out of three economic experts surveyed think the U.S. is headed toward a recession.

You already know how we feel about that here at Wealth Daily: We’re already in a recession and, if anything, we could be headed toward a depression if we’re not careful.

But the outliers in this survey paint a far scarier picture, as many analysts say interest rates could reach 6% by this time next year.

That leaves many of us wondering when exactly the Fed will stop raising rates and when the stock market will turn around.

Well, to answer that, we have to start at the beginning, with the creation of the Federal Reserve.

The Federal Reserve: A Modern-Day Jekyll and Hyde

In November 1910, six men boarded a private train car in New Jersey under the guise of a duck hunting trip.

They were embarking on a mission so secretive that they were instructed to only call each other by their first names...

Nelson, Harry, Frank, Paul, Piatt, and Arthur became known as the “First Name Club,” and they were headed to a secluded island off the coast of Georgia called Jekyll Island. 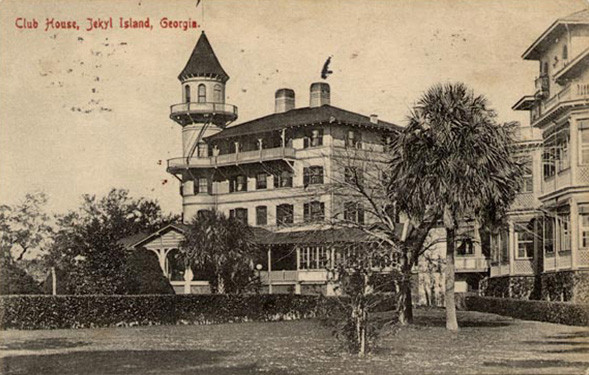 The meeting was likely arranged by J.P. Morgan, a member of the private Jekyll Island Club, known as “the richest, the most exclusive, the most inaccessible,” club in the world.

The mission was simple: Reform the nation’s banking system after the panic of 1907, when the stock market lost 50% of its value.

After tireless days and sleepless nights, what came out of the gathering was called the Reserve Association of America, which dictated that the U.S. would have one central bank with 15 branches across the country.

According to the Federal Reserve History website, “The branches would be responsible for holding the reserves of their member banks; issuing currency; discounting commercial paper; transferring balances between branches; and check clearing and collection. The national body would set discount rates for the system as a whole and buy and sell securities.”

Under President Woodrow Wilson, Congress passed the Federal Reserve Act in 1913 and the rest is history.

It was a good idea.

Some would say it was necessary.

And it's worked well.

But when it goes badly, it goes very badly.

On average, nationwide panics have occurred every 15 years since the founding of the country.

The last bank run occurred only 14 years ago during the 2008 financial crisis.

Time and again, U.S. markets have crashed, wiping out millions and now trillions of dollars of wealth.

And what we’re experiencing today will go down in history as one of the worst periods for the stock market.

But like all good bureaucracies, the Fed has kept growing to try to counter these economic woes.

And it only cares about one thing right now... inflation.

The Fed's in Total Control

Today the Fed comprises two parts: the Board of Governors and the Federal Open Market Committee (FOMC).

We’re only concerned with the FOMC for our investing purposes, as it’s responsible for open market operations.

The FOMC meets eight times a year, and since 1977, it’s operated under a “dual mandate.”

But it really has three main goals.

And finally, it tries to avoid high inflation or deflation.

Right now the Fed is focused solely on inflation.

And in order to combat it, the Fed carefully studies one economic measure above all else...

Core inflation in the form of the consumer price index (CPI), which excludes volatile food and energy prices.

Food and energy are excluded because they’re not necessarily a sign of long-term inflation since food and energy fluctuate frequently and rapidly.

In theory, the CPI pinpoints the root causes of inflation.

But as it turns out, Americans spend a ton of money on food and energy, so don’t be fooled by the CPI... Inflation is much hotter than the Fed’s letting on.

That’s why the Fed has dramatically increased the fed funds rate to combat inflation.

The fed funds rate is the interest rate at which banks can lend money to each other.

Raising rates is essentially adding an extra tax to anyone who uses money, which is the entire world!

High rates make it more expensive to borrow, which lowers the money supply and in theory brings down inflation.

But remember — and this is important...

The critical pivot that will spark the next great bull market, then, is the lowering or slowing of interest rates when CPI numbers are low.

We've created a special FOMC mailing list for anyone who wants to be alerted the moment CPI numbers come in lower and the Fed lowers rates.

You'll know exactly when inflation is decreasing, which will usher in the new great bull market.

Sign up for our FOMC alert list today and you'll receive three stocks to ride the massive wave of money about to flood the market.

You won't want to miss it.