This Could End the Plastic Industry as We Know It 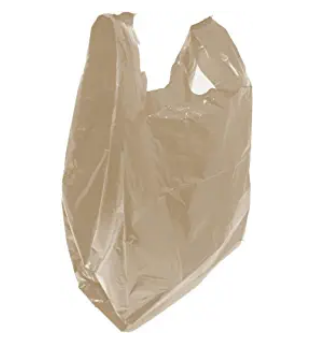 It ranks right up there with cigarettes and carpentry nails as one of the most numerously manufactured products known to man, with over 500 billion produced, distributed, used, and discarded every year across the globe.

In the U.S. alone, we use more than 100 billion disposable grocery bags each and every year. That's almost one bag per American per day.

The size of the environmental impact is immense and comes at us from various stages of the product life cycle.

At one end, these bags require enormous volumes of oil to produce — with the U.S. market alone sucking up as much as 12 million barrels a year, close to a full day's worth of domestic oil production.

At the other end, these bags all need a place to go once they're used. A majority of the time, that somewhere is into the ground, where they'll spend the next thousand or so years breaking back down on a molecular level.

Increasingly often, however, these bags are discarded irresponsibly and wind up in sewers, then rivers, then, ultimately, our oceans, where they continue to poison the environment.

It's this pollution that kicked off the war on single-use plastics several years ago. You may not have noticed it, but you are actually living on the front lines.

For a growing number of cities and towns in the U.S., those grocery bags we happily gobbled up at a rate of 100 billion per year are no longer freebies at the store. Now you have to pay.

Nationally, a $0.10 cost per bag would rake in $10 billion per year if consumption rates remained the same. Consumption, not surprisingly, is now falling, with more shoppers than ever opting for reusable bags.

In other countries, the measures have been far less delicate. India plans to ban all single-use plastics by July 2022. The list includes bags as well as food and beverage containers.

The measure may seem extreme, but environmentalists insist that it is not enough. More nations need to get with the program. Single-use plastics need to be viewed not as a convenience but as a toxin that already has contaminated the ecosystem so thoroughly that plastic is now literally in our bloodstreams.

The problem is that our mass-consumerism world isn't going to change a thing until there is a viable, economically workable replacement.

Today, the first signs of just such a thing are starting to appear.

Just days ago, a tiny Canadian company built entirely around the singular concept of a truly compostable plastic alternative announced the launch of a Keurig-compatible single-serve coffee pod.

Why coffee pods, you might ask? A few reasons.

First of all, the coffee pod market is big. Very big. More than 50 million units are bought and used every year. Even a small share of a pie that big would be enough to turn this $100 million-market-cap company into a billion-dollar industry player.

More importantly, however, the coffee cup is a perfect proof of concept. To work, these small containers need to withstand elevated pressures and temperatures of 192 degrees Fahrenheit.

They also need to be able to sit on a shelf for months on end without losing any of their structural integrity.

If this new material can work in a coffee pod, it will be more than sufficient to work in a disposable plate, fork, or soft-drink bottle.

"So what's the big deal?" you might ask... "That's just trading one form of trash for another, right?"

Wrong. As this is a truly compostable plastic alternative. That means any product made from it will completely decompose within about 60 days — or at the speed of an apple core.

Competing solutions throwing the "compostable" claim around are typically only compostable in specialized, high-temperature composting facilities.

Like I said, right now this company is barely on the radar. Or at least that was the case until the Keurig headline made the news last week.

The stock has jumped nearly 50% since then, and from the looks of things, it's going to continue on this path for some time.

Could This Be the Next BASF?

Its market cap is still just $100 million, which will be a drop in the bucket once the licensing fees start pouring in, but now, the secret is officially out.

Fairly soon, I would expect the institutional investors to come in and turn this microcap into a small cap, but for the moment, the chance to get in at these development-stage price levels is still very real.

No, this won't be an overnight ascent, but five–10 years from now, this firm will either have turned into a midcap industry leader or sold out to one of the giants.

I obviously can't predict which outcome will come to pass, but I can tell you that based on the trading patterns of the last few days, the best entry window is closing right now.

Don't waste any more time. Check out my full video presentation on the company, the product, the patents, and the future.

It will change the way you look at plastic from now on, I can promise you that.