These Retail Stocks Might Not Survive the Next Recession

Remember the “retail apocalypse” of two-ish years ago?

For a few months in 2017, mainstream financial news websites were littered with photos of abandoned malls and sad stories of retail workers who lost their jobs to e-commerce competitors like Amazon.

The mainstream media has long since moved on from the “retail apocalypse” story, but that doesn’t mean retail stocks are out of the woods. Not by a long shot.

In fact, for many struggling brick-and-mortar stores, the apocalypse never ended. And now that the yield curve is inverted and the U.S.-China trade war is in full swing, some weakened retail stocks are facing a scary question: Can they survive the next recession?

Several flagging retail stocks have been called “the next Blockbuster” in recent years, but it’s hard to find a better Blockbuster analogue than GameStop (NYSE: GME).

Online game marketplaces like Steam, PlayStation Network, Xbox Games Store, and Google Stadia have done to GameStop what Netflix and other streaming services did to Blockbuster. And today, GameStop’s stock price is on a similar trajectory to Blockbuster’s 10 years ago... 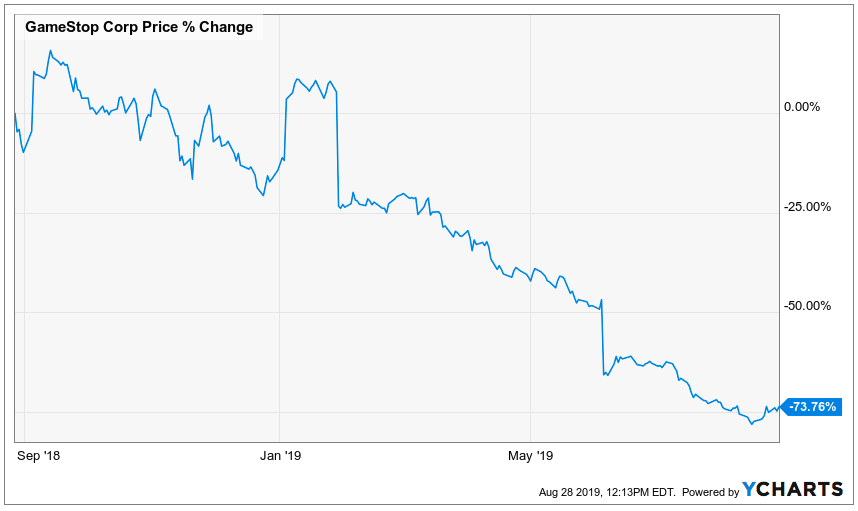 Burry rose to national fame as one of the first investors to bet against the housing market in the mid-2000s. He’s one of the most brilliant contrarian investors of our time. But that doesn’t mean every call he makes is right — and this one looks pretty wrong.

His investment thesis is largely centered on GameStop’s balance sheet — which is, for the moment, surprisingly strong. The firm has a relatively low debt-to-equity ratio of 36.3%, for example.

That, however, is almost certain to change as GameStop burns through its remaining cash on share buybacks and other ineffective investor relations stunts. The firm is now losing more money per share than it ever made, even during its peak years. 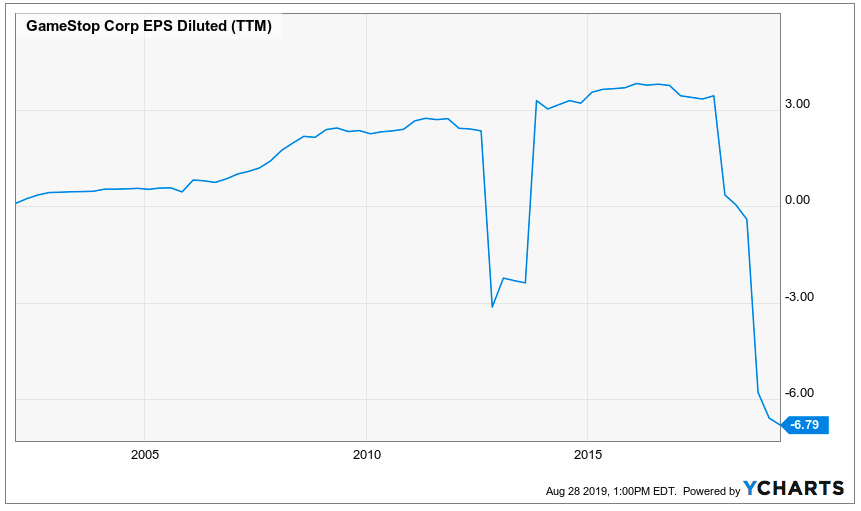 Sooner or later, something’s gotta give. Even if there weren’t a recession looming, GameStop’s survival would be uncertain. In the current environment of anxiety and profit-taking, it’s a dead stock walking.

Another company that has been in a long decline independent of economic conditions is J. C. Penney (NYSE: JCP). It has lost almost 98% of its value from a decade ago. 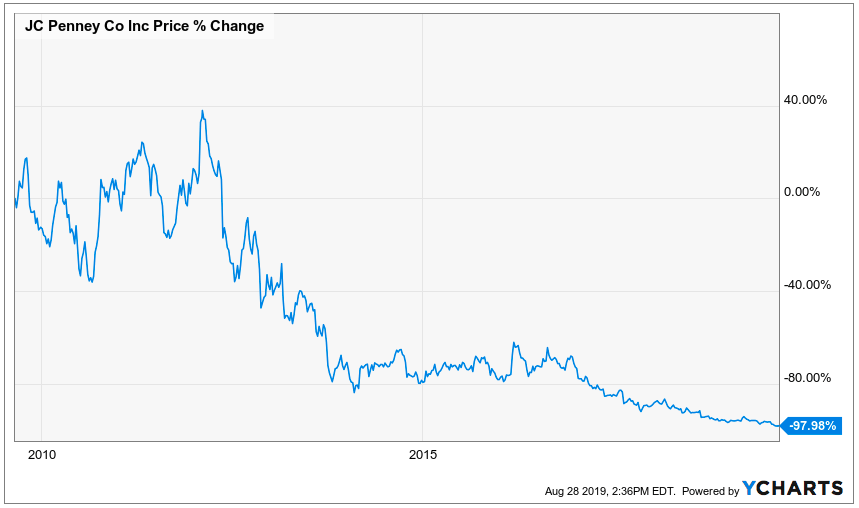 The once-mighty retail chain never recovered from the disastrous tenure of Ron Johnson, a former Apple executive who was hired as CEO in 2011 to reinvigorate the brand after the slow years of the Great Recession.

Johnson made a series of terrible marketing decisions that have since become something of a “what not to do” business parable.

He alienated the firm’s bargain-hunting customer base by abruptly eliminating sales and coupons — leading to a 40% decline in holiday revenues year-over-year — and ran up billions of dollars of debt.

J. C. Penney’s board fired Johnson in 2013, but the damage had already been done. He left the firm with negative earnings, a debt-to-equity ratio of almost 400%, and a free-falling share price.

Earlier this month, that share price crossed an ominous milestone: It stayed below $1.00 for 30 consecutive business days, triggering a warning from the New York Stock Exchange. J. C. Penney has six months to get its price back up above $1 or it will be delisted.

Management has proposed a reverse stock split to quickly bring the firm back into NYSE compliance. That might stave off a delisting for a few months, but ultimately it’s just delaying the inevitable.

J. C. Penney built its brand on deep-discount pricing... and went into a tailspin when it tried to abandon the practice. With this in mind, you might think Bed Bath & Beyond (NASDAQ: BBBY), which has never stopped printing those 20% off coupons, should be in good shape. 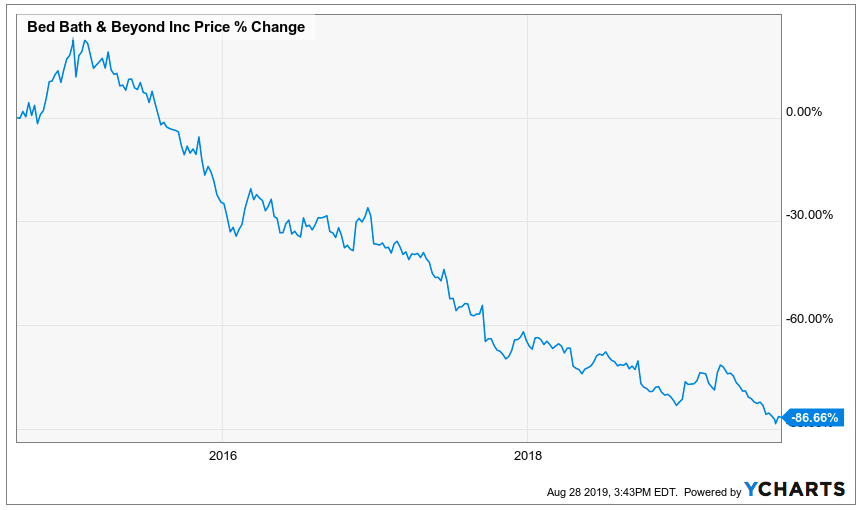 Like the other two companies we’ve examined today, Bed Bath & Beyond’s decline is a story of incompetent managers making bad decisions about how to deal with the threat of e-commerce.

The firm has been incredibly slow to build an online presence. It hasn’t done much to build e-commerce capability besides acquiring a few tiny, niche online retailers — like One Kings Lane and Decorist — in the late 2010s.

At several points in the last few years, its founder-directors have also used company funds to bail out underperforming businesses owned by their relatives. This is how Bed Bath & Beyond acquired two of its worst-performing subsidiaries, buybuy Baby and Chef Central.

Today, like the other firms in this article, it has negative earnings, more debt than cash, and a stock price that is likely headed toward zero.

These three companies are among the worst positioned to survive the next recession. But they’re not the only ones that might go belly-up if the economy goes south in the near future.

In fact, my colleague Christian DeHaemer has been tracking a set of companies that could help you prepare, protect your money, and even profit during the coming downturn. Read more here.