Even though gold and silver are nearing record highs, the metals are ready for a major breakout as the flight to safety is becoming necessary.

Unfortunately, many people still doubt gold — or simply don’t understand why they need to own the precious metals.

But they're going to learn the hard way... and sooner rather than later.

Over the next several months, investors will come to gold and silver after they have gone through a process of elimination, investing in other over-valued investments such as currencies, real estate, and Dow-related stocks.

Once these investments start to decline, investors will jump from one over-valued investment class to another until they finally discover the precious metals.

This transition has been slowly been taking place over the past several years.

At some point, the U.S. dollar will be in free-fall — and the stampede to gold will be in full swing.

The gargantuan financial risks that exist in our global markets are staggering. When you understand the risks to the market with naked short selling, derivatives insanity, unsustainable debt structures of governments worldwide, etc... it leaves you with a very uneasy feeling.

These risks are very real and hardly understood by the average citizen.

We’re in the midst of a huge bubble in the debt markets that’s probably going to get bigger before it finally deflates.

That bubble is characterized by huge bets on risk in the markets for government notes, corporate bonds, home mortgages, and the various synthetic derivatives based on those instruments.

These bets are getting larger and larger as those involved have to keep going to the next level of risk to manage their current unsustainable position.

The question is can these bubbles be deflated slowly or will they just pop. Either way, the die is cast. 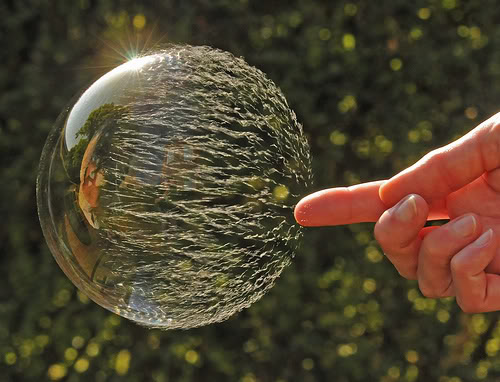 The people who tout the idea that these risks to the system will just disappear with little or no consequence are living in a fairytale land.

Gold and silver will be going much higher as events worldwide continue to unfold. Beware of those who maliciously and negatively pound on gold, trying to mislead you from the very asset class that will protect you.

The mainstream media keeps referring to gold being in a bubble, suggesting the yellow metal is destined to collapse...

But whether it's FOX or CNN, conservative or liberal, the engines of mass media are fueled by the revenue from their corporate advertisers.

And these giants ultimately depend on your continued faith in the U.S. economy and dollar.

But I believe momentum will continue to gain as the problems with debt become more pronounced and the problems from the derivative situation again show their ugly head.

I expect gold to reach for $1,700 an ounce if things don’t fall apart and the world continues on its merry way without major problems unfolding.

Silver could be even bigger. I think we could see $50 silver as early as autumn.

When things come to a head, however, there is no limit I see on how high gold and silver prices can go...

It will simply be an equation of how much fiat money is chasing such a small amount of physical bullion.

How much will you have?