The Turkish Invasion of Syria Could Tank Emerging Market Stocks

The war in Syria has dragged on for eight and a half brutal years at this point. The ever-changing, multi-sided conflict has claimed at least half a million lives and sparked one of the largest refugee crises in human history.

Until recently, it seemed hard to see how things could get any worse for the region. Then, on October 9, President Trump abruptly yanked our forces out and green-lit a long-planned Turkish invasion of Syria after a brief phone call with Turkish President Recep Erdogan.

What does this have to do with investing? Quite a lot, actually — especially if you’re exposed to oil or European emerging market stocks. I’ll explain why in a moment.

First, let’s look at what’s going on in northern Syria, where Kurdish militants are trying to fight off invading Turkish forces, and why it’s a whole new humanitarian tragedy in the making.

It would be impossible for me to fit a summary of the entire Syrian civil war into an article. Hell, it would be difficult to fit one into a book.

But let’s start with a piece of information that most people know: The U.S. established a small military presence in Syria in the mid-2010s to help fight ISIS.

Our most valuable partner in this fight was the Syrian Democratic Forces (SDF), a multi-ethnic group of local self-defense militias. They were the main beneficiaries of U.S. airstrikes, weapons shipments, and personnel deployments under the Obama and Trump administrations.

The SDF is largely composed of Kurdish fighters from northern Syria (the self-governing, majority-Kurdish portion of the country, also known as Rojava, that borders Turkey).

Below is a (now likely outdated) map of the situation in Syria earlier this year. The teal area marked “Kurds ‘Rojava’” is (or at least was) controlled by the SDF. 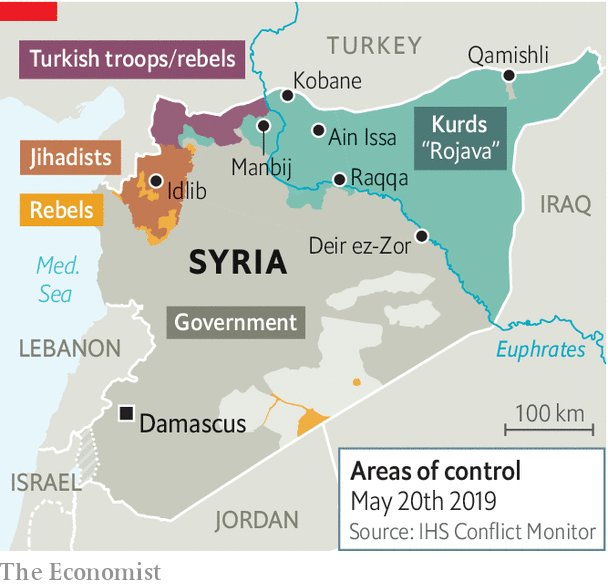 These Kurds did most of the hard work in defeating ISIS, serving as shock troops in the push to recapture ISIS territory, in exchange for American assurances of protection from their other enemies. (It’s worth mentioning here that the Kurds lack a nation-state of their own.)

There’s just one problem: One of those other enemies is their northern neighbor Turkey — the second-largest military power in NATO and a key U.S. ally since the 1990s.

Why does Turkey want to get rid of the Kurdish militias in northern Syria?

In short, Turkey has its own Kurdish population, and that population has been waging a separatist insurgency against the Turkish government since the 1980s.

Turkey’s government sees many Syrian Kurdish militias — including those that constitute the SDF — as extensions of the insurgent groups it’s fighting within its borders. In other words, it sees the SDF as a threat to its national security, and it’s been waiting for an opportunity to get rid of it.

It got that opportunity on October 9, when Erdogan talked Trump into ending our military support of the SDF and pulling all of our remaining troops out of Syria.

Turkey’s military wasted no time in taking advantage, launching a massive offensive into northern Syria. And based on preliminary reports from the ground, it’s bad for the Kurds who live there. Really bad. Like, ethnic cleansing bad.

A Humanitarian Tragedy in the Making

In the days since the offensive began, hundreds of Kurdish civilians have been killed by Turkish forces and tens of thousands have been displaced. And that’s not all.

Instead of trying to describe the mounting atrocities in northern Syria myself, I’m going to give you a short excerpt from a recent article on this subject by Jason Simpkins, director of the geopolitics-focused newsletter The Wealth Warrior.

A Turkish airstrike against a convoy of vehicles carrying civilians and journalists killed at least nine people.

Dozens of others were executed, including Secretary General of Syria's Future Party Hevrin Khalaf. 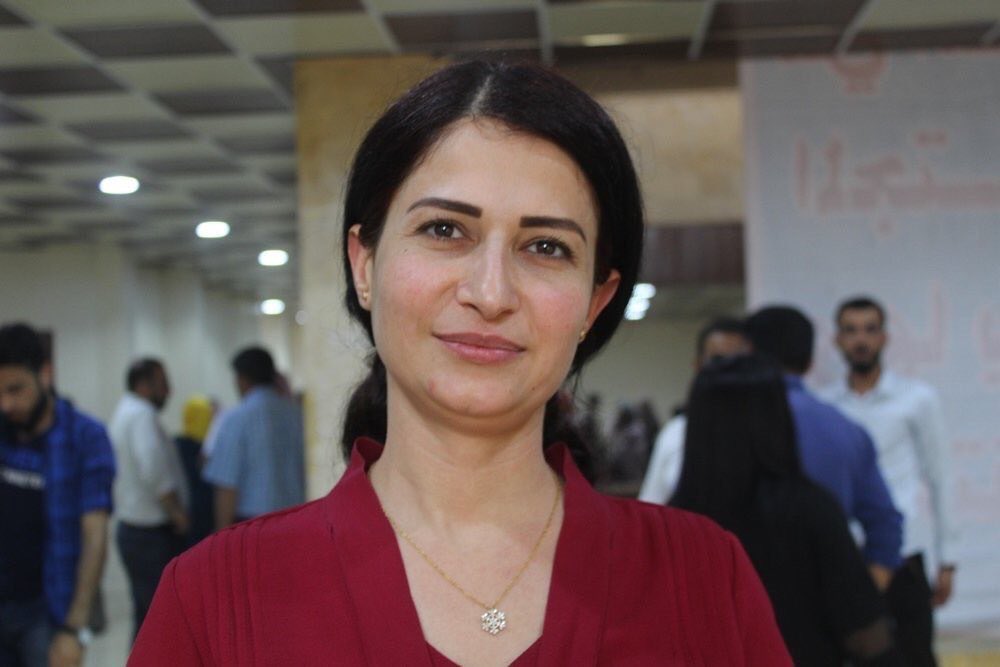 Khalaf, who aimed to unite Arabs, Christians, and Kurds was dragged from her car, and depending on what report you read, was either raped and stoned to death or simply shot.

Either way, Turkey’s state media deemed it a “successful operation” to “neutralize” the unarmed 35-year-old woman determined to bring peace to the region.

Furthermore, the Turkish forces were apparently so busy killing civilians they didn’t have time to corral all of the ISIS POWs being held in Kurdish prisons.

The Kurdish administration in northeastern Syria said 785 people affiliated with the Islamic State escaped from a camp that had housed 12,000 displaced people. And American forces, overwhelmed by the Turkish presence, were unable to carry out plans to move several dozen other high-value detainees to more secure locations.

You read that right. In addition to killing and displacing civilians, Turkey is conducting public stonings of Kurdish community leaders. And it’s allowing captured ISIS fighters to escape from formerly Kurdish-controlled prisons.

Some commentators are arguing that the worst is over for now. After all, Erdogan has claimed that Turkey has no further need for military operations in northern Syria, and Trump has claimed that there is a permanent ceasefire in place in the region.

That doesn’t mean he’s right, though — or that Erdogan is telling the truth. He has been deceptive about his aims in the region before.

After all, Turkey invaded northwestern Syria (the region shown in purple on the map above) in the spring of 2018. Despite reports of violence against civilians, nearby U.S. forces decided not to intervene on the condition that Turkey stayed on the west side of the Euphrates river.

As we now know, Turkey had no intention of doing so; its plan was always to invade a larger swath of northern Syria.

Given Turkey’s past untrustworthiness in its dealings with Syrian Kurds, it’s easy to speculate that it could launch yet another attack on Kurdish forces in the near future. And if this humanitarian crisis continues, it could also soon precipitate a financial crisis in the region...

American politicians on both sides of the aisle have been quick to condemn Turkey’s actions. Chris Van Hollen and Lindsay Graham have introduced a bill in the Senate that would subject the Turkish military to economic sanctions, and a similar bill is being debated in the House.

For now, the threat of targeted sanctions hasn’t had much of an effect on the Turkish stock market. After all, Turkey’s military is not the largest component of its economy. 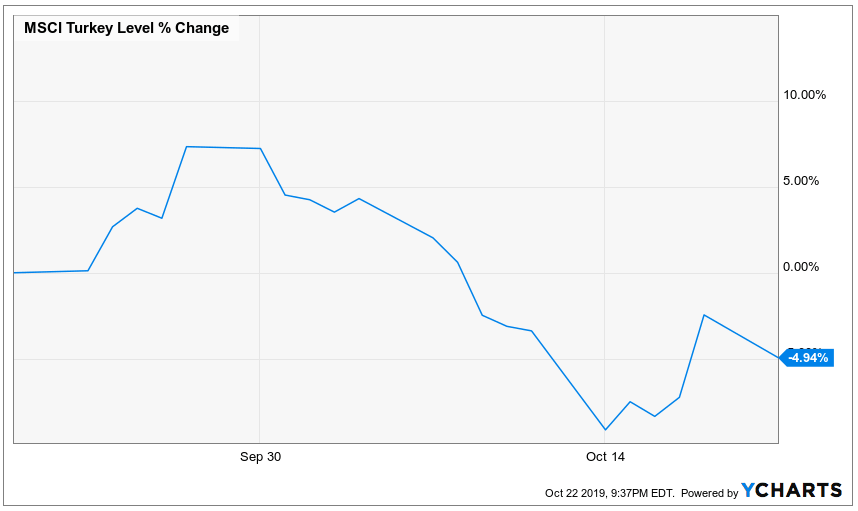 But given the number and severity of atrocities being committed by Turkish forces in northern Syria, it's likely that the economic warfare will only get heavier from here.

A growing list of European and Middle Eastern countries, some of which are important trading partners to Turkey, are denouncing its government's actions and calling for broader sanctions. Tariffs could also be on the table.

Those measures could hit systemically important parts of the Turkish economy — like its largest energy and financial services firms — and crash the Turkish stock market. And thus they could have impacts on emerging-market equity investors around the world.

That's because Turkey is one of the world's largest emerging markets. It has a particularly heavy weighting — almost 10% — in the MSCI Emerging Markets Europe Index, which is tracked by many popular exchange-traded funds (ETFs). 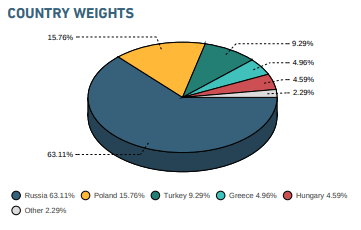 It's hard to say how long it will take for the full impact of the Turkish invasion of northern Syria — and the resulting sanctions — to be priced into markets.

But needless to say, this growing humanitarian tragedy makes a strong near-term case for avoiding MSCI Emerging Markets Europe ETFs — not to mention Turkey ETFs — and their constituent stocks.

Oil investors should also be cautious until a clearer picture emerges of who is in control of northern Syria’s billions of barrels of reserves.

And ultimately, money is far from the most important thing at stake here. The brave men and women who saved the world from ISIS have been betrayed by fickle U.S. foreign policy, and the result could be a horrific ethnic cleansing campaign at the hands of the Turkish government. An old Kurdish proverb, “No friend but the mountains,” has been validated once again.

ESG ETFs: Socially Responsible Investing Done Wrong
ESG ETFs have a lot of problems, including high fees, subpar returns, and an inconsistent definition of socially responsible investing. Today, Wealth Daily contributor Samuel Taube explains why conscientious investors are better off looking elsewhere.
Buffett's Envy: 50% Annual Returns, Guaranteed
Warren Buffett once told investors at an annual shareholder meeting, "...it's a huge structural advantage not to have a lot of money. I think I could make you 50% a year on $1 million. No, I know I could. I guarantee that."