The Trump Impeachment Process and the Stock Market

I don’t know whether you love Trump or hate him, but regardless, I’m almost certain your blood pressure went up when you saw the phrase “impeachment process” in the title of this article.

Here’s all I’ll say about the political content of the situation: House Speaker Nancy Pelosi has initiated impeachment proceedings against President Trump for what his opponents claim was an illegal quid pro quo during a recent phone call with Ukrainian President Volodymyr Zelensky.

We don’t know if the allegations are true or false. We don’t know whether this impeachment drive will succeed or fail. If you want more information on those topics, consult your favorite political news source (personally, I’m partial to foreign sources like the BBC when it comes to intensely partisan U.S. news items like this).

Wealth Daily is not a political news source. We’re a financial news and education website. And while we can’t speculate with any authority on whether or not Number 45 did the thing he's accused of, we can certainly look at the probable impact of this impeachment process on the stock market.

The Financial History of the Impeachment Process

As we all know, two presidents have had impeachment proceedings filed against them in recent history: Richard Nixon and Bill Clinton.

You might think these two data points show a consistent trend in how the stock market reacts to impeachment, but you’d be wrong. 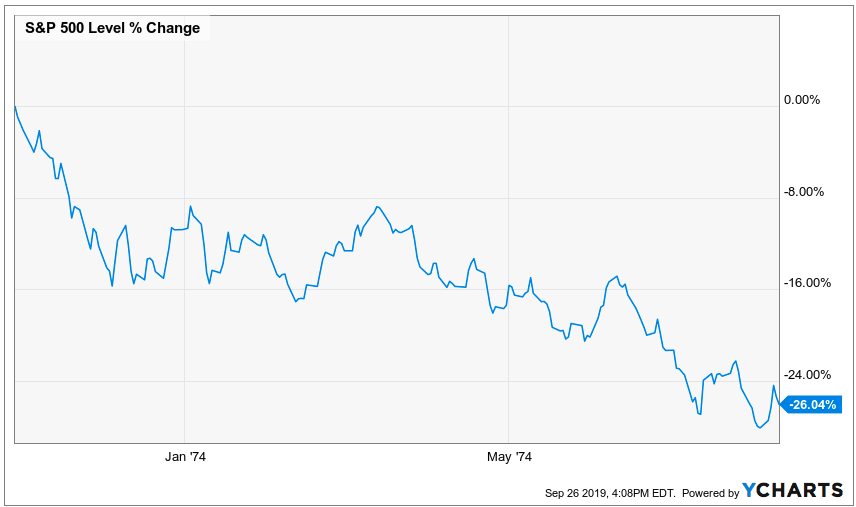 But here’s a graph of the S&P 500 during Clinton’s impeachment process, which ran from October 1998 to February 1999. The index gained a little more than 28% in that time. 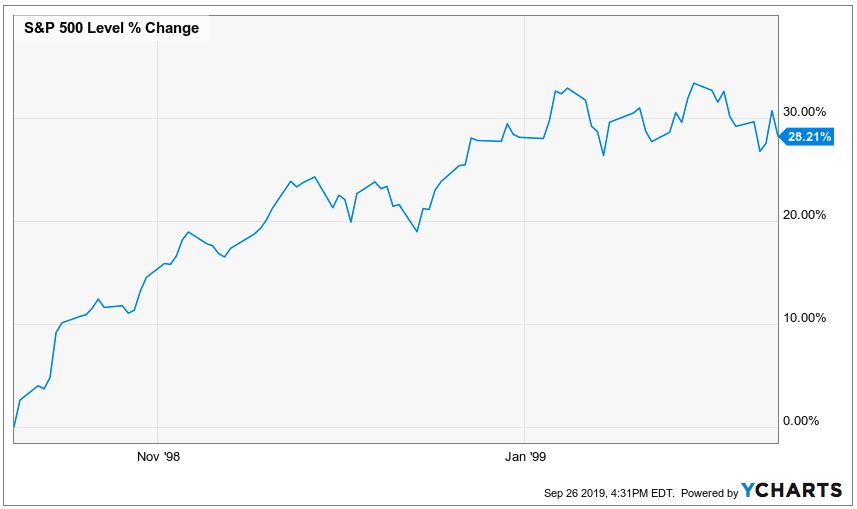 These diametrically opposed stock market reactions demonstrate that impeachment processes don’t necessarily make the market go up or down. They just amplify the market’s pre-existing trends.

After all, if you look at the entirety of 1973 and 1974, you’ll see that the S&P 500 lost almost 42% during that two-year period as the 1970s oil crisis and accompanying stagflation took their toll on the U.S. economy.

The 26% loss during the Nixon impeachment process was certainly a big part of that decline, but it’s not the whole story behind it.

Similarly, the S&P 500 gained almost 52% over the entirety of 1998 and 1999, as the dot-com bubble reached its height. The 28% gain during the Clinton impeachment process doesn’t provide a coherent explanation for the market’s behavior over that entire two-year period.

So we know impeachment doesn’t have an absolute effect on the market — rather, it makes the market keep doing what it was previously doing.

But what is the market doing now?

It’s a difficult question to answer in the current context, in which Trump is facing an impeachment process ahead of a contentious election, the market is teetering near all-time highs, and recession indicators are starting to line up.

Much of the tension and uncertainty in the market today is related to the U.S.-China trade dispute — and unfortunately, this impeachment process could really throw a wrench into the U.S. position…

Trump and the Trade Talks

I’m going to make a point about the trade dispute you’ve probably heard before. I certainly didn’t come up with it; pundits have been talking about it ever since Trump took office...

The U.S. is at a disadvantage in any trade dispute with China because Americans can vote out their leaders if the economy gets too bad during the negotiating process; Chinese people can’t.

China is an authoritarian one-party state. Its current leader, Xi Jinping, recently changed the Chinese constitution to get rid of his own term limits. He’s not going anywhere, regardless of how this trade war goes. And many pundits have pointed out that all he has to do to win this trade war is “wait out Trump.”

“Waiting out Trump” used to mean “waiting out one or two full presidential terms.” But if the Chinese feel that this impeachment process is going somewhere, then they might think Trump will be gone even faster than that. And they might get bolder in their trade negotiations.

That may already be happening. Last week, Chinese trade negotiators abruptly canceled a series of farm visits. It’s impossible to say whether they did so because of some advance knowledge of Speaker Pelosi’s impeachment process… but it doesn’t look good.

All in all, this is yet another reminder to reduce your holdings of stocks that are heavily exposed to China and to invest in stocks that do well in times of uncertainty.

But if you’re looking to make money from this latest twist in the trade war saga, my colleague Christian DeHaemer has been tracking a set of energy stocks that could actually see huge gains as a result of the ugliness between the world’s two largest economies. He wrote more about them here.