The Three Best Cannabis Stocks to Buy on the Dip

Don’t Say I Didn’t Warn You

Last Friday, I wrote to you with a warning...

I said cannabis stocks had gotten way too high. And I said they were due for a correction.

Now, when I wrote, they were already starting to show signs of weakness.

The highest flyers, like Tilray (NASDAQ: TLRY), had already started to fall from the heights of a speculative bubble.

But the worst of it came this week... just as I’d warned you it would.

If you were paying any attention to the markets last year, then you had to notice the meteoric rise of cryptocurrencies like Bitcoin.

They went parabolic in 2017. But all the gains were from speculators who didn’t really understand cryptocurrencies — or investing in general, for that matter.

And the values plunged after getting bid up to unbelievable levels.

When cryptos were all the rage, the volatility of those investments was off the charts. And it was one of the things detractors used to show it wasn’t a viable investment yet.

But that’s changed. Cryptos are now less volatile than some major companies like Apple and Facebook when you’re looking at short-term volatility.

And now it’s pot stocks that are going bonkers.

Volatility is through the roof. And so far, the industry is down drastically for the month... 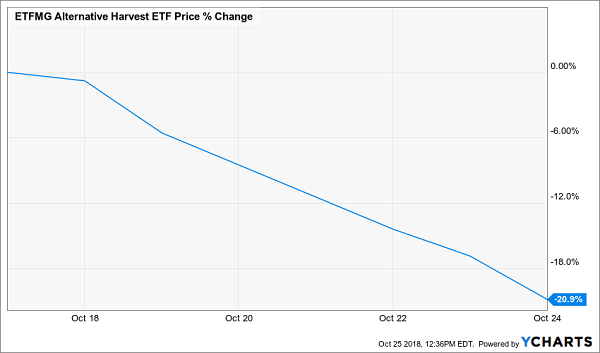 The biggest cannabis ETF, ETFMG Alternative Harvest ETF (NYSE: MJ), is down over 20%.

And some of the biggest names in cannabis are down even farther... 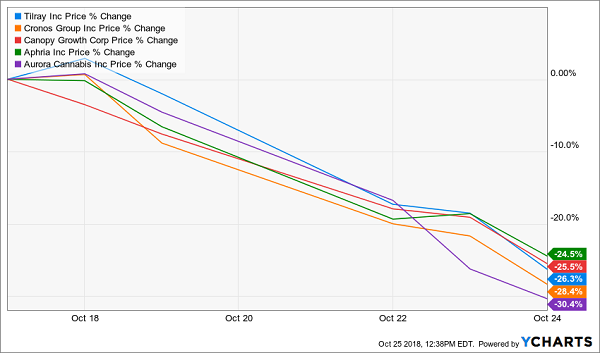 Now, some of this sell-off is a correction that was overdue. Cannabis stocks were way too expensive. And investors knew this.

But some of it’s also because of weakness in the broad market. When people get nervous, they tend to sell the biggest gains first. And cannabis stocks were the biggest gainers this year.

No doubt, cannabis stocks were in a bubble. But there was still something real supporting a lot of that price.

And that’s because there’s a big difference between cannabis companies and cryptocurrency.

If all else fails, they can sell those off to pay back investors.

There’s nothing behind cryptocurrencies.

And that’s why I’m confident that what we’re seeing is just a dip on the way to much bigger things.

That’s also why I’m advising my readers to buy this dip. There’s blood in the water. Some of it’s ours. But there’s still a feeding frenzy about to go down.

And there are some really great deals out there for the discerning investor.

And U.S. legalization is all but a forgone conclusion.

So I’m adamant about taking advantage of this opportunity to get yourself positioned for massive gains ahead.

And I’m going to help get you started with some cannabis companies that stand to weather this storm and come out on top.

Last week, I warned you about putting all your bets on growers. And Canopy is one of the biggest growers out there. So it’s still susceptible to the risks I outlined. But it’s more than just a marijuana garden.

The company also owns ventures that process the plant and make cannabis products like oils, tinctures, and edibles. It’s also got licenses to export its cannabis and cannabis products outside the country. And after a 25% drop, it’s looking much cheaper and more reasonably priced. Canopy is one grower that will become an industry titan.

Liberty is a small, Vancouver-based company that trades on Canadian exchanges and over the counter in the U.S. It’s a producer and distributor of medical cannabis, and it’s got licenses to operate in several U.S. states.

Liberty went on a run up to around $2 back in January, but it’s since fallen off. Interest seems to be picking back up as investors see the intrinsic value of the company’s distribution network and licensed U.S. operations. Liberty has avoided much of the selling other bigger names have seen. And its small size and relative anonymity may be saving it from the sell-off.

Scotts had a massive run up when investors first heard of its exposure to the cannabis industry. But the stock sold off when they also found out how small a part of Scotts revenues that venture would provide. And recently, it’s been getting whacked thanks to a lawsuit surrounding Round Up, one of its best-selling products.

But Scotts will recover from the Round Up debacle — farmers need herbicide, and it’s the best out there. And as the U.S. legal cannabis industry picks up, Scotts is going to become the main supplier to a massive industry. It’ll take time, but I see Scotts as a major player in a fully developed marijuana market.

Saving the Best for Last

Those companies are three of my favorites in the cannabis space. And they’re three I see weathering the drop and rebounding as the industry continues to develop.

But there are actually a couple I like even more. And members of The Wealth Advisory investing community are already profiting from them.

Here’s a chart of how they’ve performed while the rest of the industry was collapsing: 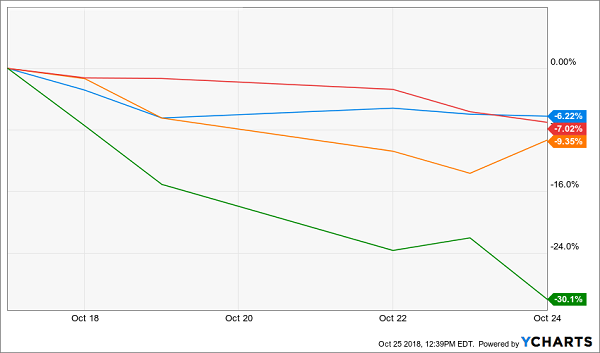 As you can see, one of them got whacked just as hard as the rest of the industry. But it was up nearly 100% the two months before. And we advised members to take some profits off the table and wait for this correction to buy more.

The rest of them fell during the sell-off but easily outperformed the other cannabis stocks by 100% or better. And they’re all starting to head back up as I type because they've got even more intrinsic value than any other cannabis investments on the market...

All of them are positioned to grow exponentially as legal cannabis expands across the country and the world. And that’s because they all provide something that the industry needs to exist.

They don’t grow cannabis. They don’t sell it. But without them, the industry couldn’t function.

If you’re interested in learning more about my top cannabis investments, you can view a presentation outlining the opportunity here.

Don’t delay. This correction won’t last, and the next cannabis rally could start next week.

Get all the information you need now so you can start profiting tomorrow.