The Stocks Set to Rebound From the Coronavirus Selloff

If you’ve been reading my recent articles, you know that I’m not exactly bullish on stocks right now. And the economic data that came out last week is only strengthening my bear thesis.

Twenty-two million Americans have lost their jobs in the last month. Banks and the fed are forecasting 30% unemployment and 50% GDP contractions next quarter.

Even if we manage to start lifting lockdowns soon without COVID-19 roaring back — and that’s a big "if" — it’s hard to see how the economy will manage to dig itself out of this hole in the near future.

Market conditions are bleak to be sure. But that doesn’t mean that all stocks are equally affected by this crisis. In an article last month, I looked at three industries which should feel no impact — or even a positive impact — from the COVID-19 pandemic.

Today’s article, however, is a little different. Rather than looking at stocks which should be immune to this crisis, we’re profiling stocks in two industries which should be hit quite hard by it — but which should recover faster than other severely impacted stocks.

This first industry might surprise you, given that it’s been among the hardest hit…

Last month Saudi Arabia and Russia initiated an oil price war by opportunistically refusing to cut output ahead of a projected drop in demand due to the COVID-19 pandemic.

In other words, they both flooded the market with cheap oil to try and steal market share from one another but ended up crashing the global oil market instead.

If this situation sounds familiar, it’s because it has many parallels with the events which kicked off the 2010s oil glut.

Back in 2014, the price war was a more complex, 4-way conflict between the United States, Russia, the Gulf states (led by Saudi Arabia), and an alliance of emerging-market oil producers like Iran and Venezuela. It sent Brent crude down below $30 by January of 2016.

Yet despite the severity of that selloff, Brent was up 75% just a year later, as oil-producing economies realized that they had to play nice with each other and cut their collective output. 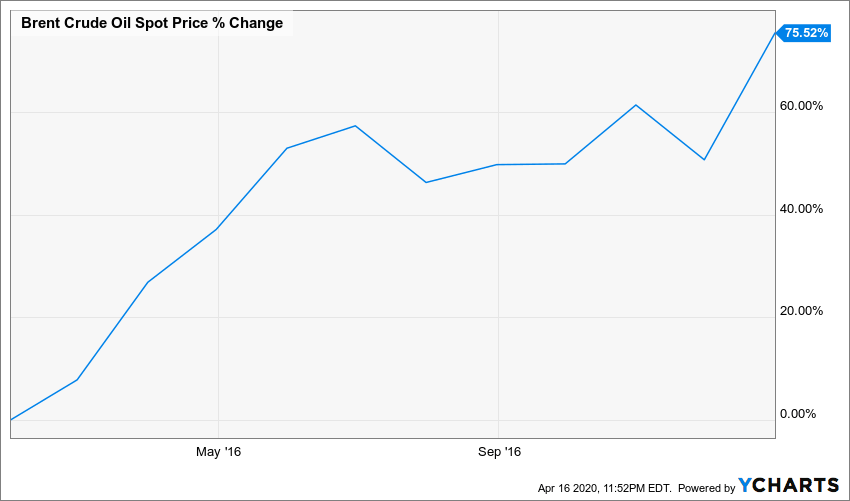 There’s reason to believe that history will repeat itself. In fact, OPEC+ (the expanded consortium of OPEC and other oil producers formed after the 2010s glut) is already planning a massive production cut of 9.7 million barrels per day for May and June.

And if that cut works as well as 2016 one, oil & gas stocks could come roaring back this year-long before other industries start to recover. A broad oil & gas exploration ETF like the iShares Dow Jones US Oil & Gas Exp.(BATS: IEO) provides an easy way to play this recovery.

But there's another industry which has noteworthy comeback potential today. In fact, it’s one of the biggest beneficiaries of the current chaos in the oil market…

Global travel is effectively on pause until further notice due to the pandemic — and so it’s easy to see why airlines have been hit so hard in this market crash. The US Global Jets ETF (NYSE: JETS), a fund tracking major airlines around the world, has shed more than half its value in the last two months… 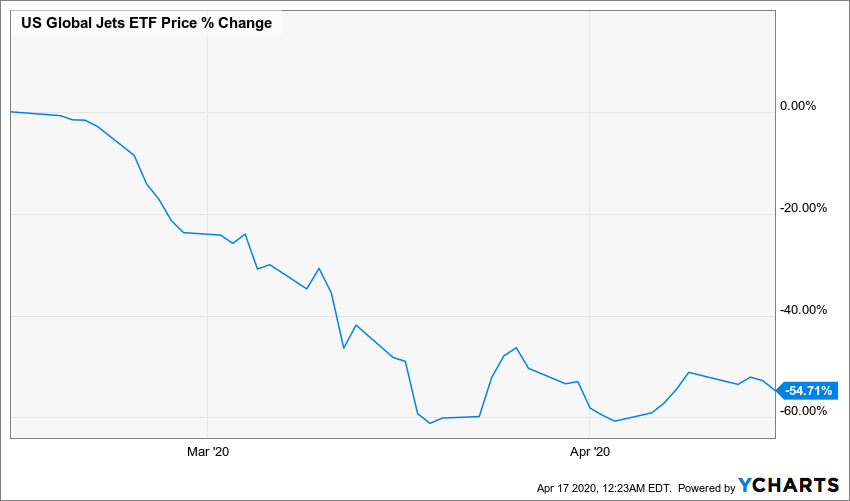 Yet here as well, there are reasons for optimism. The CARES Act, Congress’s coronavirus stimulus action, included $50 billion in tax cuts and grants for the airline industry — on top of access to federal borrowing facilities.

Perhaps more importantly, airlines spend a lot of money on fuel. In fact, it’s generally their biggest single expense, representing between 15% and 20% of their total cash outflows on average. And those fuel costs are near currently historic lows due to the aforementioned oil market crash.

It’s no wonder the JETS ETF is already up almost 17% from its mid-March lows.

As you can see, some of the best buying opportunities in this coronavirus selloff are actually found in the hard-hit energy sector — and in industries heavily affected by the energy sector, like airlines.

The two ETFs we’ve profiled today provide good ways to play recovery trends — but ultimately, the investors who make the biggest profits in the coming months will likely be those with an insider’s understanding of the oil industry.

Energy Investor can help you gain that insider’s understanding. Editor Keith Kohl averaged a 20% return per trade during the 2014 oil market crash — and he’s getting ready to lead his subscribers to contrarian profits again during this crash. Click here to learn more.