Take a look at this image:

This is a screenshot from my brokerage account of a stock that’s making record highs as the broader market crashes.

On February 24 of this year, I sold 2,000 shares of a company you probably never heard of. In fact, I would bet my season tickets to the Baltimore Ravens that 99.9% of investors — retail as well as institutional — have no idea this company even exists. But I can guarantee you a family member or a friend has used one of its products in the past.

More on that in a minute.

Now, here’s a screenshot of that same stock in my brokerage account back in October 2020:

As you can see as plain as day, I bought 2,000 shares of the stock roughly 15 months earlier.

Here’s a three-year chart of Lantheus:

I’m going to reveal how my team of experts discovered this play… the secret meeting in the back office I conducted with Keith Kohl and Luke Burgess, who explained to me why Lantheus was a screaming buy in 2020… and how this entire event demonstrates the “Angel Way” of playing the markets to great success and profit.

And I’ll show you how you can join in on the “Angel Way” right now.

(By the way, Keith Kohl traded Lantheus last year for a quick 54% profit in his Topline Trader service.)

Now let’s get to it.

Take a look at this picture of one of Lantheus’ products. 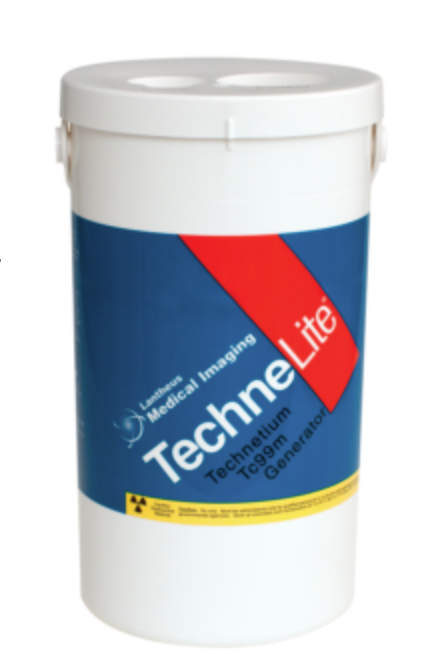 It’s no bigger than a soda bottle. Probably weighs less than a pound. Yet it is responsible for saving more lives than any other medical device ever invented.

In fact, the widely respected New England Journal of Medicine called it “one of the top advances in medicine in the past 1,000 years” and said that “there is no equivalent tool”...

And Health Care Business Tech recently named it No. 1 of the top 10 greatest medical innovations of the last 50 years.

And it’s easy to see why.

You see, this “soda bottle” device is such a vital tool for healthcare workers to save lives that it’s used approximately 50,000 times a day in prestigious U.S. hospitals like John Hopkins, the Mayo Clinic, Cedars-Sinai, the Cleveland Clinic, and the UCLA Medical Center, just to name a few.

All told, we are talking about a technology that’s used in over 5,700 hospitals and another 6,600 medical clinics and diagnostic centers all across the United States.

It’s also used in hospitals all across the globe, in every single corner of the planet.

That’s because this device is so effective, it’s used to fight every single type of cancer, heart disease, stroke, and every other deadly disease in between, including COVID-19.

So it’s no wonder that in the last four years, the company that has developed and patented the next-generation advancements of this technology has seen its stock single-handedly outperform Apple, Tesla, and the Dow combined!

In fact, this incredibly small company’s technology is used so much, its stock has...

The company went public in 2015. You could’ve picked up shares then for just $2 — and been up 3,350% since that time, making it one of the best-performing stocks of the last few years.

And here’s why: The company makes medical imaging devices and agents used to find practically every disease known to man.

My boys came to me with the opportunity in the fall of 2020 for two reasons: 1) There was a shortage of molybdenum-99 (known as moly-99) that’s vital to Lantheus’ medical imaging… and 2) hospitals and medical centers were reopening for outpatient visits after the brutal COVID-19 lockdowns.

So there was going to be a huge uptick in business for Lantheus’ lifesaving technology. And that meant the company’s stock was going to the moon.

Our prediction was a bull’s-eye shot right down the center.

You see, during the draconian COVID lockdowns, sales for Lantheus’ products dropped dramatically because there was no demand. People weren’t going to hospitals for treatments other than COVID.

My father, for example, missed all of his annual cancer screenings.

But once the medical industry began reopening for business, demand shot up like a rocket.

The way we discovered the opportunity in Lantheus is something I call the “Angel Way.”

The Angel Way allowed us to think about what we also called the “Great Reopening.” What companies would benefit the most when the American economy began reopening after the COVID lockdowns?

We locked ourselves in a conference room and began the long journey to finding the very best investments for our readers.

It's a universal principle, one we actually founded a business on.

We strive to be unconventional — because it allows us to cut through the spin and lies to see the real truth.

Now, we do realize that this may separate us, and often it means going against the majority. That’s OK. We think of ourselves as unique individualists with our own opinions and views on how the markets and world really work.

But make no mistake, there's a battle raging that will separate the haves from the have-nots… and those who don’t listen will be shooting themselves in the foot. This is a story you're not going to hear from CNN or even Wall Street.

Like I said, I call it the Angel Way. It’s a way of looking at the world and human nature differently. And it’s definitely not for the weak-minded or compliant.

The ideas and strategies I'm going to outline will ensure you survive and prosper in the years ahead. Big shifts in markets and societies expose massive opportunities.

And moreover, the Angel Way is timeless. It’ll be as true 100 years from now as it is right now.

Truth is, the media beg us to appear on their shows. But we usually always refuse, happy to fly under the radar — committed to our mission in helping like-minded individuals like you accumulate wealth by being ahead of the trends.

I’m talking about trends like the oil spike that started in 2005… the renewable energy boom… gold’s historic rise… the housing bubble and bust… the financial crash of 2008… the birth of Bitcoin in 2009 and the cryptocurrency revolution that followed… 5G… the soaring demand for lithium batteries and rare earth minerals… and even the cannabis craze.

These predictions resulted in our readers making fortunes because we were well ahead of the herd.

And I’m here today to make another shocking prediction… and to warn you about an event… an event that’s been well underway for years… but gained significant momentum during the COVID crisis.

In the coming weeks, I’ll tell you about this dangerous event being planned by governments and the global elite. It’ll impact everything you do, including your investments. The time to prepare is now.

Here’s a small glimpse of what’s being planned for you...

I’m talking about an event so crazy that it will drastically change life as we know it.

Imagine, for a minute, being told how often you can drive your car, and how far... or if you’ll be allowed to take a vacation with your family… or where you can live... or the amount and type of physical assets you can legally own…

I’m serious. Many people in power want to manage your behavior, right down to the types of stocks and assets you can buy — like mining companies, automobile and weapon manufacturers, and oil and gas producers.

As you read this, the U.S. government is planning to launch its own cryptocurrency, a digital dollar, so it can track your every move and monitor your every purchase.

It's a shocking display of complete power and, frankly, a betrayal of human values. What's crazy is it's a soft power, so it'll go unnoticed by most. And, true to form, the vast majority of folks will pass it off as a non-event… something that doesn't affect them.

And, true to form, they'll be wrong.

This is total control. Think about it...

Even the most personal conversations you text or email to family and friends will be subject to scrutiny.

How about being locked out of your bank account for donating to a forbidden cause… your access shut off without any warrant, due process, or trial. Gone.

What if your favorite foods are deemed unhealthy for you, for the planet, for whatever reason?

If this sounds impossible, I've got bad news for you...

The Biden administration just attempted to launch a disinformation arm in the Department of Homeland Security. Fortunately, the backlash was so fierce that the idea faded away. But like all ideas — even bad ideas like a Ministry of Truth — it’ll just go into hibernation until it can come out.

It’s time to start planning for this. And we will be with you the entire way, helping you build a fortress around your personal sovereignty.