The Picks and Shovels of the Cannabis Green Rush

On January 24, 1848, James Marshall found the first nuggets of gold and sparked a mass migration. In the following years, over 300,000 people from all over the world came to California seeking their fortunes.

But most hopeful miners would barely break even. According to the California State Parks, most would only find about $10 to $15 a day in gold dust. And most of that was spent on overpriced supplies — especially as the fervor grew.

But people did pay. And they paid a premium for everything from butter to blankets: 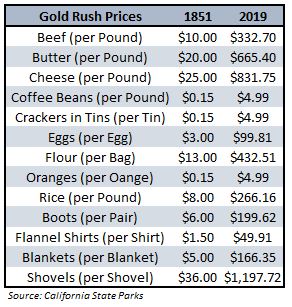 Those are prices for some everyday items provided by the parks department. I’ve converted them into 2019 equivalents so you can really appreciate how much it cost to be a miner. $1,200 for a stinking shovel.

And that’s why recent scholarly research has shown it wasn’t the miners who got rich off the California Gold Rush...

It was the businessmen. In fact, the richest man in California almost never lifted a shovel in his life. He only really lifted any tools if he was selling them to a miner.

Samuel Brannan owned the first supply store in the area. And he was raking in over $2,000 a day selling supplies to eager miners. That’s over $66,000 in today’s terms.

He was known to have bought up all of the picks, shovels, and pans in San Francisco right before the Rush and was fond of telling folks he’d been able to buy them for $0.20 a pan and could sell them for $15 each.

Levi Strauss is a name you all probably know. But did you know it was the Gold Rush that really cemented his success?

Strauss’ family ran a dry-goods wholesale business in the east. And when news of gold hit, they decided to send Levi out to open a branch in California.

Levi opened up Levi Strauss & Company in San Francisco, and the rest is history.

Although miners unearthed over 750,000 pounds of gold in California during the Rush, it was the businesses that supplied the industry that really thrived.

And that’s why investors call those kinds of companies “pick and shovel” plays.

Let’s be honest: Behind any great person, there’s always a great team — people who provide the support that person needs to really excel.

LeBron James has a staff of trainers and dieticians and coaches and assistants. And while he deserves credit for his hard work, he’d never have gotten where he is without that team behind him.

But it’s LeBron who gets to hold the trophy. And it’s LeBron in the spotlight. He gets all the attention while they do a lot of the work.

Support industries are very similar. But they make a lot more money.

Think about Uber, or just car sharing in general. Lyft and Uber were building up multibillion-dollar private valuations. Investors were eagerly awaiting an IPO so they could participate, too.

But the one company they both relied on to keep the business going was already public and nobody cared.

I saw just how integral the company was to what Uber and Lyft — and many other companies — were doing. And I recommended it to the readers of The Wealth Advisory right before the stock took off.

That company was Twilio. It provides the platform companies like Uber, Lyft, and even Amazon use to communicate with customers. And it’s blown up in value since we identified the opportunity: 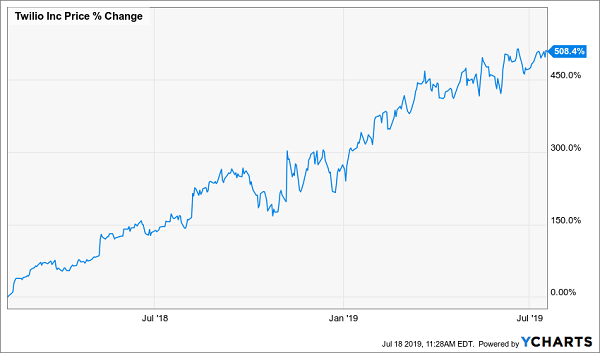 That’s a 500% gain in just a couple years. Once the market caught on to how important Twilio was to so many companies, there was no stopping the rally.

And it’s not the only time I’ve been able to capitalize on that kind of play.

In the late 2000s, data consumption and creation were growing at a breakneck pace. And we needed a way to store it all so we could get to it from anywhere. So techies came up with this thing they called the cloud.

Nobody really understood what it was. I was one of them. But I was intrigued. This cloud was going to need to be huge to hold all the data. I wanted to know who owned this newly created real estate.

So I went digging. And I learned that the cloud is nothing more than a whole lot of servers connected via the internet.

That’s when I started getting very interested in data centers. They're where all those servers that make up the cloud live. And whoever owns them owns the cloud.

I recommended a little-known company to The Wealth Advisory. It was called CoreSite. And it was one of the newcomers in a rapidly growing industry. 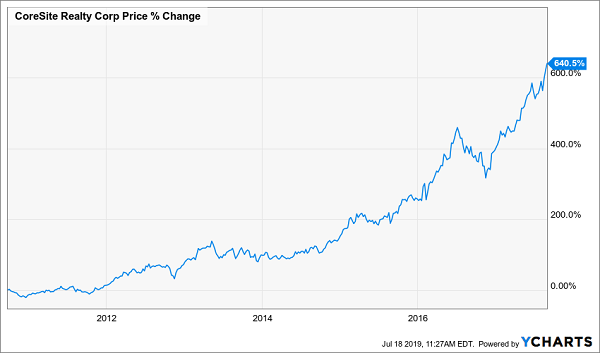 As the trend in data and cloud growth continued, TWA readers banked big bucks thanks to this pick and shovel play.

Going back a little further, we can find one of my best pieces of financial research. And it didn’t really take that much research on my part...

I was still working in investment banking. Our company had just started using an outsourced workforce management company. I’d never heard of it before, but it was pretty great — seamless transitions between my systems and its systems, quick response from its teams.

So I decided to look into it a little more, and I found out it was already public. The ticker symbol was CRM. The company was Salesforce. And the chart looks like this: 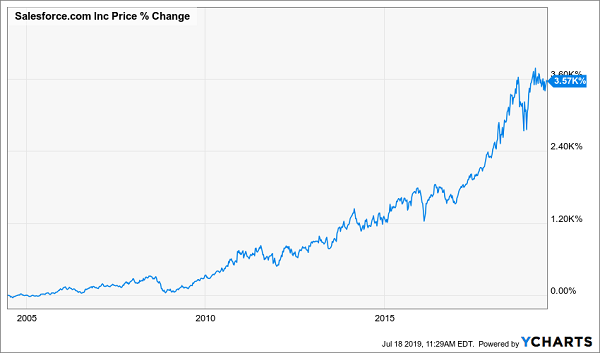 And the great thing about these investments is that every time an industry starts to grow, there are countless opportunities to find its support companies and get rich...

The cannabis industry is no different. But those companies are still mostly flying under the radar. Investors are all focused on the producers like Canopy, Tilray, Aurora, and Aphria.

And there are much better ways to make money and spread out your risk if you look at what the industry needs to survive.

It needs land. I identified a company that provides just that. It doesn’t grow, process, or sell cannabis. It just rents out the room you need to do all that.

And it’s made my readers massive profits. I zeroed in on the company in late 2017 — less than two years ago. And we’ve made an absolute killing so far: 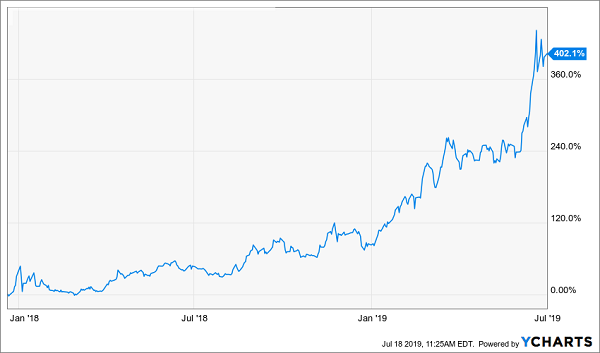 And I expect those gains to keep growing as the industry continues to expand. It doesn’t matter if Canopy loses its CEO (again) or Aphria gets hit by a short seller (again).

But land isn’t the only thing cannabis producers need. They need a way to package their product so they can get it to consumers. And I don’t know if you’ve ever bought legal cannabis, but that packaging is complicated.

And the company that produces a lot of it for the industry has made investors incredibly happy. They’re up almost as much as I was with Salesforce: 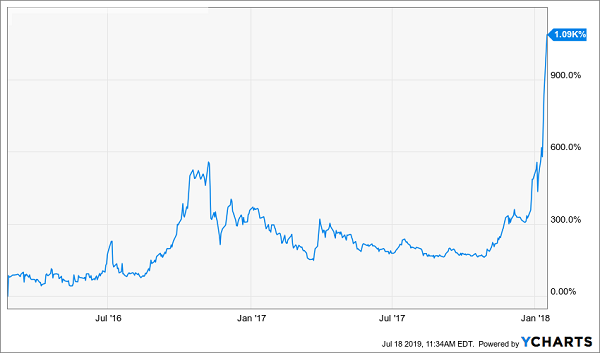 That’s just a sample of the kinds of gains you can get from investing in support industries. And there are still countless opportunities that haven’t been uncovered by the herd yet.

And I’ve identified one that I’m convinced could make even more money for early investors than those two put together...

It’s also part of the rapidly growing cannabis industry. It provides something every producer, grower, processor, and dispenser needs. It’s something every user demands with their cannabis. And pretty soon, its services will be required by law for every single cannabis product on a store shelf.

And it’s the only company big enough to handle the surge of business that will follow U.S. legalization.

Somehow it's still going unnoticed by all but a tiny corner of the investing world. But that’s not going to last.

When all those cannabis investors driving up the valuations of the growers find out about this company, they’re going to send this tiny stock through the roof.

That’s why I want you to get in on it first. You’ve seen countless charts of massive gains. And you’ve heard so many stories about people who struck it rich on one perfect investment.

Stop watching and listening, and start showing and telling.

This is your opportunity to write your own overnight success story. This is your chance to invest a small amount in one unknown company and secure your dream retirement.

My partner and I have put together a report that details the opportunity. You’ll get everything you need to get yourself invested before this tiny company becomes one of the big names on CNBC.

And you’ll have your chance to write a new success story of your own.

Just click here and you’ll be directed to the report.

But don’t wait too long. We all know how fast cannabis stocks can move. And you don’t want to be one of the folks buying on the way up. You’ll just be giving those million-dollar gains to someone who took my advice and invested early.

Act now. Read the report today and get yourself invested for tomorrow.