The People Have Spoken... Here's What the Market Thinks

S&P 500 futures got pounded last night as the incoming election returns began to confirm that the improbable was happening. In fact, futures went "limit down," which means they were down as much as they are allowed to go: 5%. That's 100 points. A 5% drop on the Dow Industrials is 915 points.

That doesn't sound good, does it?

Of course, the initial reaction was a bit extreme. Bargain-hunting buyers stepped in and made a lot of money as those futures contracts bounced. And we're even seeing a little green for stocks in the early going today.

As investors, it is vital that we understand why the reaction to a Trump presidency is an issue for the stock market. So let's have a look at that now.

The initial reaction to Trump's win seems to be based on the idea that he would actually implement everything he promised in his campaign. The recovery in asset prices is then the more realistic idea that not all campaign promises become reality.

Like the promise to bring manufacturing jobs back to the U.S. 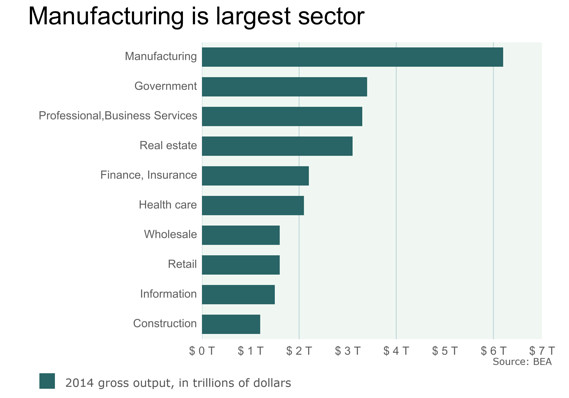 To quote a MarketWatch article from earlier this year:

Gross output of U.S. manufacturing industries — counting products produced for final use as well as those used as intermediate inputs — totaled $6.2 trillion in 2015, about 36% of U.S. gross domestic product, nearly double the output of any of the other big sectors: professional and business services, government and real estate.

Total production of U.S. factories peaked in 2007 before falling by 18% during the Great Recession, according to the Federal Reserve’s industrial production report, which measures the volume of goods produced rather than the market value of those goods. The manufacturing sector has nearly recovered from the recession; output in 2015 was within 3% of the 2007 level.

The issue is that manufacturing jobs have fallen from 17.3 million in 2000 to 12.3 million in 2015. And that's simply because factories have become more automated and more efficient. It's not some conspiracy, and it's not trade deals, either. It's evolution and innovation.

Now, I expect there are some manufacturing jobs that could "come back" to the U.S. Americans could put together their own iPhones, if you don't mind making $9 an hour. Or we could reopen those abandoned textile mills, and hourly pay might be able to break $6 an hour...

It is high time politicians told Americans the truth about manufacturing. The jobs actually are there — but workers need new skills to be able to do these jobs.

What happens if the U.S. starts renegotiating trade deals or pulls out of NAFTA? Say you force Ford to abandon factories in Mexico and relocate them here in the States? Well, Ford will lose a lot of money that it has invested overseas, and that will likely mean layoffs of American workers.

Then what? Tell BMW (which already has two plants in the U.S.) they have to keep making cars here for our market, but U.S. manufacturers will be closing European factories? Somehow I don't think that's going to work very well...

And why shouldn't Starbucks be able to open up as many stores in China as it wants? Does this cost American jobs? No, of course it doesn't. But if you cut off Starbucks' main driver of growth — Asian expansion — it's a virtual guarantee that it will fire workers and raise prices to keep its earnings growth going.

Again, these are not realistic promises. If enacted, it will cost us in terms of GDP growth.

Trump promised that America would "win" again. I know, it sounds kind of silly. But you make American companies more competitive in the global economy, then maybe they actually do start winning...

Trump has also promised to do more infrastructure spending. And Caterpillar (NYSE: CAT) shares are up around 6%. Investors are telling us that this is also a realistic promise.

I like to say that the stock market is a discounting mechanism. That is, it seeks to adjust stock prices according to expectations about future earnings. So surprising events — like Trump's win — can lead to some pretty wild moves. Like that 6% jump for Caterpillar shares...

There are a few other moves happening today that you should be aware of. Bank of America was up over 5% earlier. This could be the market telling us that Trump is likely to replace Fed Chief Yellen when her term is up a little over a year from now and go with someone that will raise interest rates faster. After all, he has said: "People that I know have high regard for her, but she is not a Republican... When her time is up, I would most likely replace her because of the fact that I think it would be appropriate."

Now, Bank of America will make more money with higher interest rates. But I don't think that's why it's rallying. If you ask me (and I know you didn't), BofA is rallying because the "break up the banks" duo of Elizabeth Warren and Bernie Sanders have lost influence.

Smith & Wesson (NASDAQ: SWHC) is down 12% today because Trump isn't going to come take your guns.

Solar stocks are getting creamed because investors don't believe Trump will be as friendly to them as Clinton.

Biotechs are rolling because Clinton's threat to go after drug pricing is now removed. (But don't forget, high drug prices come out of your and your insurer's pockets.)

Twitter (NYSE: TWTR) is up nicely because it was the go-to social media platform last night. That should keep the buyout talk alive.

That's just a few examples of how Trump is actually impacting the stock market. But there's another one you shouldn't miss. That 900-point recovery for futures last night? The big money just made a fortune, literally overnight. Yep, that's the same big money that has been saying for months that a Trump win would be bad for stocks. They fanned the flames, and when Trump did actually win, they swooped in, bought the panic sell-off, and laughed all the way to the bank.

It may not be the lesson most people want, but the rich always get richer. That's true no matter who gets elected.