The Ouija Board Says "Buy"

It's 1890 in Baltimore, Maryland, and businessman Charles Kennard looks around at his failing fertilizer business at 220 South Charles Street.

Farming is a tough business, too cyclical for his liking.

He walks down the street to the Baltimore harbor, and as he watches the massive ships coming in and out of the docks, he has an idea for an invention.

It’s a product that won’t go out of style, because it capitalizes on people's fears, emotions, and desires...

So he gathers four investors to build a company that will exclusively manufacture and market one such product.

The company, called the Kennard Novelty Company, would be the first to mass-produce the “Wonderful Talking Board,” or the Ouija. 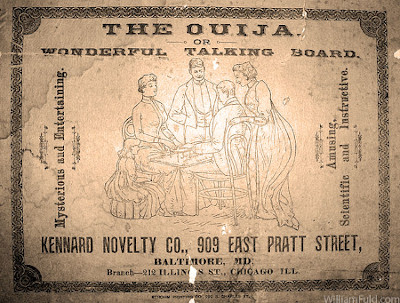 It was so successful that the Kennard Novelty Company opened another factory on Pratt Street in Baltimore, two factories in New York, two in Chicago, and one in London.

Back then, the market was primed for the Ouija board.

In the late 19th century, the American spiritualist movement exploded.

Americans had tough lives, as the average life span was around 50, women often died in childbirth, disease was rampant, and death from war was all around.

Smithsonian magazine notes that “Mary Todd Lincoln, wife of the venerable president, conducted seances in the White House after their 11-year-old son died of a fever in 1862...”

So the Ouija board offered Americans a quick hit of spiritual communion among family and friends.

It eventually spread worldwide, but no doubt Baltimoreans relished it the most, even if it was just a “toy.”

It's since become a cult classic prop in popular culture.

William Peter Blatty’s 1971 novel The Exorcist — based off the real exorcism of a boy in Cottage City, Maryland — references a Ouija board, and the subsequent movie has the infamous “Captain Howdy” Ouija board scene.

The scientific explanation for the knee-jerk muscle movement that seems to come from another realm while playing with the board is called the “ideomotor phenomenon.” It’s an unconscious, reflexive muscle movement that occurs when we focus on a specific word, thought, or action. It can affect an individual but is amplified with more people involved.

These reactive twitches can affect our daily lives, too.

We must be conscious of this phenomenon, as the language we let into our lives shapes our worldview and even the way we invest.

The ideomotor phenomenon is also called the “Florida effect,” and it proves that language primes our brains to perform certain actions, often unconsciously.

In 1996, psychologist John Bargh conducted an experiment with young students. The researchers asked students to construct sentences using flashcards. One group was given flashcards with words synonymous with old age, including bald, wrinkles, arthritis, Florida, and forgetful. The control group was given words that didn’t have anything to do with age.

Once a student completed a sentence, they were asked to walk down a long hallway and sign out of the building.

But that’s where the real experiment began...

The experiment shows that the language we see every day affects our actions, from the way we walk, talk, and think to how we work, vote, and even invest.

Just look at Facebook's name change to Meta. I don't know about you, but I'll still call it Facebook.

Zuckerberg wants to throw us off the scent and confuse us, especially now that the entire world is skeptical of the company's business practices.

The CEO recently admitted on record that the company suppressed news stories about the Hunter Biden laptop scandal that no doubt would have impacted the election.

Again, the news we see and the language we read every day has real-world consequences.

This phenomenon is partially to blame for boom and bust cycles in the market.

When millions of people hear and read information pumped out by the mass media or Big Tech, it affects more than just one person’s investment decisions.

And these small decisions add up to have a greater impact on the economy as a whole.

So whatever you do, don’t let the constant media cycle unconsciously affect your trades.

Stick to your plan.

Make sure to understand what you’re reading.

Never invest more than you can afford to lose.

And maybe, just for fun, ask the Ouija board if you should invest in Tesla.