The Biggest Shock to Gold Since Nixon

Have you looked at the market lately?

Silver is at prices not seen since the Hunt brothers tried to corner the market back in the 1970s.

Oil is threatening to break out of its range…

The price of cobalt has jumped from $24 to $40 per pound in the last three months.

The prices of wheat, coffee, and pork bellies are going parabolic...

Could it be that investors are suddenly jazzed about tin, or think that hot dog sales will boom this Thanksgiving?

No, of course not.

The answer lies with our own happy Federal Reserve.

Brian Sack, a senior official at the New York Fed, said this about quantitative easing in a recent speech: "Balance sheet policy can still lower longer-term borrowing costs for many households and businesses, and it adds to household wealth by keeping asset prices higher than they otherwise would be."

In other words, the Fed is trying to prop up housing prices and the stock market (i.e. 401ks and other retirement plans) by keeping rates low, printing money, and destroying the value of the dollar.

The fact that they admit this isn’t surprising... (It should be. I wish I was shocked, but I’m not.)

The U.S. economy has been run like a giant Ponzi scheme since the Asian Currency Contagion of 1998.

This was followed by a series of “crisis that will destroy the world economy”: Russian debt default, 9/11, Long Term Capital Management, dot-com bubble, housing collapse...

Each one of these crises required the heroes at the Fed to step in and “save us” by printing money and creating the next bubble.

This always reminds me of those Salvador Dali posters all the cool kids had in college: 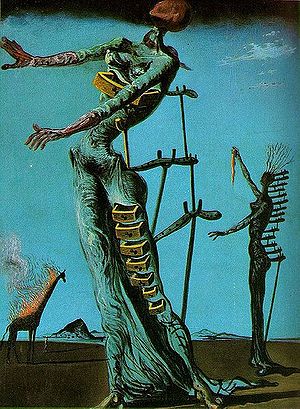 At some point, you have to pay the piper.

Bills come due, and you can no longer prop up the empty corpse of the economy by adding another buttress. The flaming giraffe of debt will have his say.

We wish, dear reader, that someone had the nerve to stand up in 1998 and let those who bet on LTCM take their lumps as a warning to the rest of the capitalist risk-takers.

Make no mistake; the bailout of LTCM twelve years ago is directly responsible for the debt markets turning into a free-for-all five years ago. Heck, many of the same people were involved.

And why not take risks?

If the Fed can bail out Long Term Capital Management, they can bail out AIG. And Wall Street was correct in its assumption.

Nothing has changed... No lesson has been learned.

Right now, we are in a race to the bottom of the currency well.

Around the world, countries are manipulating their currencies down. The president of Brazil warned of a global trade war.

The International Monetary Fund (IMF) said, “Governments risked a currency war by using exchange rates to solve their own domestic problems, which in turn could derail the global recovery.”

When America prints money and cuts interest rates, the dollar falls in value. This pushes the fast money to places with a strong currency — places like Brazil, India, and Canada.

Goldman Sachs says the Brazilian real is the most overvalued currency in the world.

These countries that were mostly immune to the recent debt crisis want to grow exports just like every other country. They feel they need to stem the rise of their currencies, but they also fear inflation.

The Bank of Japan this week cut its interest rates to zero so that foreigners would stop buying the yen. Switzerland began selling Swiss francs on foreign exchanges last year. Israel also admitted to currency intervention. Venezuela devalued the Bolivar.

China — in a smooth maneuver — bought up Greek debt, saying that it was there to help... but in effect, this move pushed the euro up against the RMB.

There are four results of this

The first is that it creates volatility and uncertainty in a time when clarity is needed most.

The second is that it makes the price you pay for everything go up. In effect, a falling dollar is a massive tax that hits the poor and middle class the hardest. What do you think $5 gasoline will do to the economy in 2011? Shall we bail out GM and Chrysler a second time?

Thirdly, it will lead to trade wars the likes of which we haven’t seen since the Great Depression, stifling economic growth and pushing unemployment into the teens.

And lastly, these currency wars will lead to a change in the global currency system.

We are on an unalterable course that will see the biggest shock to the international currency exchange system since Nixon took the dollar off gold in 1971.

And it will happen sooner rather than later.