Five Reasons to Get Bullish Now

The gains just keep rolling in...

Those American Express (AXP) calls are now up more than 52% — and still rocketing.

Take a look at what the stock has done since we recommended it: 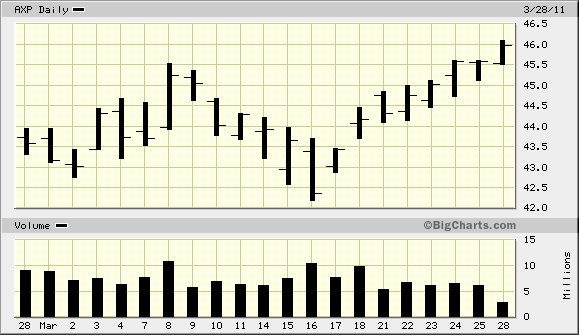 Those that just bought the stock are up maybe 6% at most.

As for those Gulf companies we spoke of last week:

But that's nothing; today I'll tell you where real money could be made.

The buying opportunity of a lifetime

On news of the Japan disaster, rare earth stocks took it on the chin. But they also gave us the buying opportunity of a lifetime, as many ripped back north.

You see, we knew it was only a matter of time before rare earth stocks made up for lost ground, following the earthquake and tsunami in Japan — and that Japanese demand would only be temporarily cut.

And we were right... 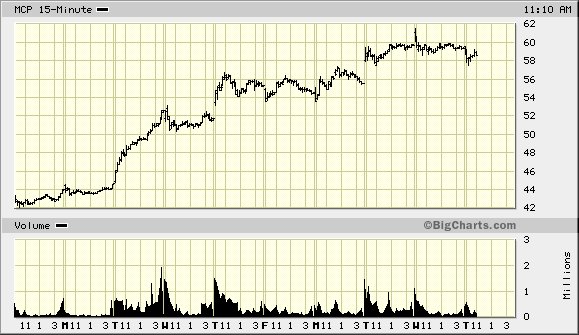 And further and unlimited upside remains:

And despite the fact that the Pentagon has "concluded" that China's monopoly on rare earth metals, used in military hardware, poses no threat to national security... it does.

Over the next 10 years, global rare earth demand is expected to more than double as Chinese exports shrink. This alone would send rare earth prices higher, leading to a tighter market.

That poses a very real problem for the Pentagon.

It may be why U.S. House Rep Mike Coffman just said of rare earths:

[They are] critical to U.S. national security. Currently, the world is nearly 100 percent reliant on Chinese exports for these vital materials. However, China has been reducing its export quotas every year since 2006, and has announced a further 11 percent reduction for 2011.

A disruption in supply of rare earths could jeopardize national security, hinder our long-term efforts to achieve domestic energy security, and damage our world-leading high tech industries. While our nation must act to correct our domestic rare earth supply chain problem, we must also recognize that the lack of a level playing field for trade policy is harmful.

That tells me that it's not just iPads and iPhones you should be worried about...

That tells me there's a very real fear of a depleted rare earth supply for technological advancements and “top secret” technologies, already running short as we speak.

Truth is, the rare earth crisis may be far worse than anyone imagines. And it might be the reason the United States is working so fast to get Molycorp's U.S. mines up and running.

Back up the truck on rare earth stocks... and hold. The story is just getting warmed up.

You can thank me for the gains over beers — your treat.