The Nerve to Downgrade Amazon

So yesterday, some greenhorn analyst had the nerve to downgrade Amazon. Amazon! The nerve!

Now, I don't know how old this guy Aaron Kessler is or how long he's been an analyst. But he clearly doesn't understand how this whole stock market thing works. The rules seem pretty clear to me: if you're Netflix, Amazon, Facebook, Apple, or Google, your stocks go up. Only up. They don't go down. Business prospects are nothing but rosy, and new parents are naming their children after you.

If you wanna know just how out of touch this Kessler character is, check out his justification for the downgrade. He wrote: "Amazon will need to begin to show greater operating [profit margin] leverage for shares to move meaningfully higher."

Umm, no it doesn't. I mean, have you seen the stock trade? (Part of the appeal of growth stocks like Amazon is exactly because the profit story is all about potential, which I will explore in a minute. Once you know for sure what a company can earn, well, where's the fun in that?)

To be fair, Kessler's downgrade really isn't much of a downgrade. He now rates the stock "market perform," which, because this market only goes up, obviously means the stock is going up, too. Just maybe not as fast as it otherwise might.

But the thing that really hurts about this downgrade is the fact that, before yesterday, Kessler was bullish on Amazon. He had a $925 price target! So what happened? Why the big mood swing? Did his dog die? Did he find out there's no Easter Bunny? I feel so betrayed...

All kidding aside, Amazon is an amazing company. It is singlehandedly killing off traditional retail.

Have you ever been to a ghost town mall? We have one in Owings Mills, about 15 miles northwest of Baltimore. I went with my daughter a couple years ago to see a Game of Thrones premier on the big screen. We went a little early to grab a bite before, and there was ONE restaurant in the food court. Today, that food court looks like this: 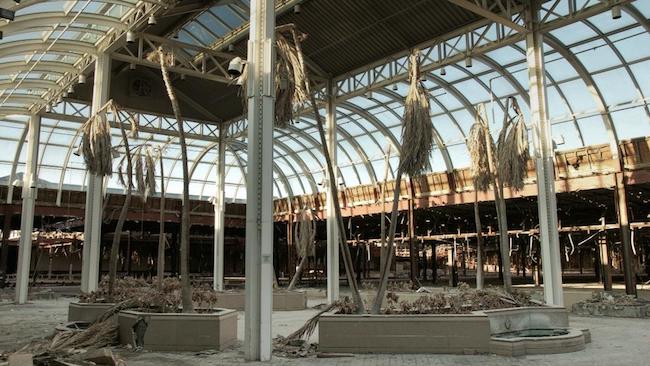 This is basically Amazon's fault.

It's true that America's retailers opened too many stores over the last couple decades. There is 7.3 square feet of retail space per capita in the U.S. Japan has 1.7 square feet per person. In the UK, it's 1.3.

But you'd better believe every business owner is watching Amazon now. Because if Amazon starts competing with you, look out. Just the other day, Amazon announced it was going to start selling furniture. Online furniture company Wayfair (NYSE: W) tanked 5% on the news.

Finally, the report claims that Wayfair uses a manual process for internal controls, which basically means it does at least some inventory accounting by hand. That seems downright nuts. Add it all up, and that's why I recommended some put options on Wayfair to my Real Income Trader subscribers.

Wayfair doesn't make money. Even though it trades around $43 a share, the book value is $1. As much as it sounds expensive, I think there's a compelling argument that Amazon and its forward P/E of 73 is actually cheap.

But this is exactly what makes investing fun. We can all play along at home. Each of us can ponder what the market might be missing, try to figure out a company's potential growth that maybe isn't priced into a stock.

For example, what happens if Comcast actually does start offering mobile phone service by turning its vast network of wireless routers into a cellular network? Can we just add $50 a month to the bills of its 28 million customers? That would be $16.8 billion in revenue, and a nice addition to the $80 billion Comcast did in 2016. See? That was fun, wasn't it?

Anyway, back to Amazon.

So, with $16.5 billion to fund and expand its business, Amazon is fine.

Where's the money going? Well, back into the business, mostly. Amazon lists $6.7 billion in capital expenditures and another $3 billion in investments. So basically, as I see it, Amazon can easily double or triple its earnings numbers anytime it wants by cutting back on investments. And Amazon is known to invest heavily in its business, like building out Amazon Web Services (AWS).

Now, as if that's not all pretty darn fun already, let's kick the good times up a notch.

Darn right it can. I'm not saying it will. But it can. And it's just not that hard to craft a scenario where Amazon is cheap.