The Monster Dog That Attacked My Wife

There’s not much that scares me.

And there’s not much I fear. I’ve been training in Brazilian jiu-jitsu since 2015. So I’m used to getting my ass kicked and accustomed to being moments from unconsciousness on a routine basis.

At any given time, I’m either sore or injured and bruised. I’m 52 years old. And I love it.

But a few weeks ago, my soul was shaken to its core with fear.

Here’s how it played out...

Every morning, I have a routine. I go downstairs into the kitchen and make coffee for me and my wife. My wife takes our two dogs — a miniature poodle and a toy poodle (who is still a puppy) — on their morning walk.

We live in a rural neighborhood about an hour north of Baltimore.

It’s quiet and slow. And our neighbors are super friendly and helpful.

But this morning was different.

As I was drinking my cup of coffee, I could hear my wife yelling. I couldn't make out what she was yelling about. I assumed it was about our dogs not listening. Our puppy, Milo, still likes to do his own thing — which usually means running into the woods.

Again, I assumed it was about our dogs. So I decided to go outside to take control like a Marine Corps drill sergeant.

That’s when I saw this circling my wife and dogs: 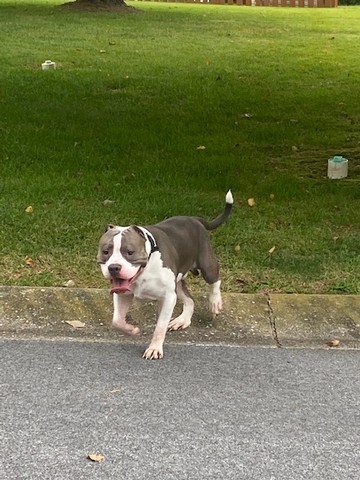 My wife was frantic.

Her clothes were torn and she was trying to protect our dogs.

I immediately got between her and the pit bull.

I made sure she and the dogs got into the house to safety.

Like an idiot, I stayed out with the “lost” pit bull, which was still feeling bloodlust. I wasn’t thinking. I just wanted the dog to go back to wherever it came from.

You see, we’d never seen this dog before.

I kept moving slowly toward it. I had nothing to defend myself, so I wasn’t under any illusions: If this dog lunged at me, I was going to be in trouble. His head and jaws were huge. He was solid muscle — A German World War II King Tiger Tank on four paws.

Luckily, I scared him off by staring straight into his eyes and aggressively standing my ground.

My wife wasn’t so lucky. She had bruises and cuts all up and down the right side of her body.

Some of her ribs were also broken.

Even today she can’t yawn, laugh, or take deep breaths without feeling pain or hearing cracks.

I alerted the authorities and posted the incident on our town’s Facebook community page as a warning and to get the attention of the dog's owner.

Pit bulls have a bad reputation, and for good reason. Go to dogbite.org and you’ll see that breed is overwhelmingly overrepresented as the cause of fatalities from dog bites and attacks. It’s not even close.

Now, 80% of people who replied to my post expressed sympathy, offered to help, or pledged to be vigilant. They seemed to understand the simple facts and the reality that a dog that strong would’ve ripped my wife apart if I hadn’t been there.

But the other 20% had a different reaction. They were apologists for the dog’s actions.

There are always apologists for catastrophic events or bad actors, whether they're dogs, sharks or humans.

Here were some of the comments from the apologists:

“Pit bulls are known to play rough, but they really are sweethearts.”

“Are you sure you didn’t provoke it?”

And the default excuse: “I blame the owners.”

No one in that 20% asked about my wife’s injuries. They only cared about the negative “stereotype” about the pit bull in my post.

For them, the victim wasn’t my wife; it was the dog.

It’s Always Someone Else’s Fault: Victims and Their Enablers

According to the online magazine Quillette, in an article titled "The Evolutionary Advantages of Playing Victim":

Victimhood is defined in negative terms: “The condition of having been hurt, damaged, or made to suffer.”

Yet humans have evolved to empathize with the suffering of others, and to provide assistance so as to eliminate or compensate for that suffering. Consequently, signaling suffering to others can be an effective strategy for attaining resources.

Victims may receive attention, sympathy, and social status, as well as financial support and other benefits. And being a victim can generate certain kinds of power: It can justify the seeking of retribution, provide a sense of legitimacy of psychological superiority to speak on certain issues, and may even confer moral impunity by minimizing blame for victims’ own wrongdoings.

Presumably, most victims would eagerly forego such benefits if they were able to free themselves of their plight. But when victimhood yields benefits, it incentivizes people to signal their victimhood to others or to exaggerate or even fake victimhood entirely. This is especially true in contexts that involve alleged psychic harms, and where appeals are made to third-parties, with the claimed damage often being invisible, unverifiable, and based exclusively on self-reports. Such circumstances allow unscrupulous people to take advantage of the kindness and sympathy of others by co-opting victim status for personal gain. And so, people do.

Newly published research indicates that people who more frequently signal their victimhood (whether real, exaggerated, or false) are more likely to lie and cheat for material gain and denigrate others as a means to get ahead. Victimhood signaling is associated with numerous morally undesirable personality traits, such as narcissism, Machiavellianism (willingness to manipulate and exploit others for self-benefit), a sense of entitlement, and lower honesty and humility.

Sound familiar? Victimhood is currently in the news cycle 24/7.

How to Monetize This Mentality: Victimhood Makes It Easier for the Wolves to Identify the Sheep

When I was in graduate school in the early 1990s, I had an economics professor who had a very unconventional and politically incorrect way of explaining the “dismal science.”

During one instruction, he shocked the class by telling us that “welfare was the best thing since sliced bread,” or something to that affect.

With most of the students with a puzzled look on their faces, he said, “Let me explain. For pennies on the dollar, you can (with what is essentially a universal basic income) exclude millions of people from competing with you in the economy. You basically pay them off to sit this one out.”

Right now, millions upon millions of Americans are “sitting this one out.” And I can guarantee you many think they deserve to sit this one out. It’s their god-given right!

We're facing a massive labor shortage. The United States is in need of 80,000 truck drivers. Policemen, fire fighters, teachers, and nurses are walking off of the job rather than taking vaccine they don’t want.

It will get worse.

But mark my words, those who are still working their butts off are showing the world what true courage and work ethic is. And they will be rewarded. And I’m going to make it my personal and professional mission to help them gain even more. You’ll soon find out how.

By the way, the morning after my wife was attacked by that dog, she insisted in on still going into the office because, as she put it, "People are counting one me."