Every now and then you really need to take a step back from the day-to-day mayhem to get a clearer look at the bigger picture. And I spent some time doing just that yesterday.

As you all know, I’m not convinced that the Fed can fight reality. And I’ve warned not to get caught up in this apparent return to a bull market. I’ve advised you to use the mindless enthusiasm to trim your positions and better position your portfolio for prolonged volatility and further declines in the broader market.

But when the drop doesn’t come, even with dismal earnings, continued lockdowns, and failed stimulus efforts, it gets harder to hold onto that theory. You start to get emotional — the exact thing you don’t want to be — and you start to worry that you’re missing out on the best deals.

So, I took a walk through the last financial crisis the world faced (the Great Recession) to give myself some perspective. And I wanted to share it with you today.

The Great Recession was one of the longest in U.S. history, lasting around two years (depending on whom you ask). And as the most recent and one of the most severe, it’s a pretty solid comparison for what we seem to be facing today. 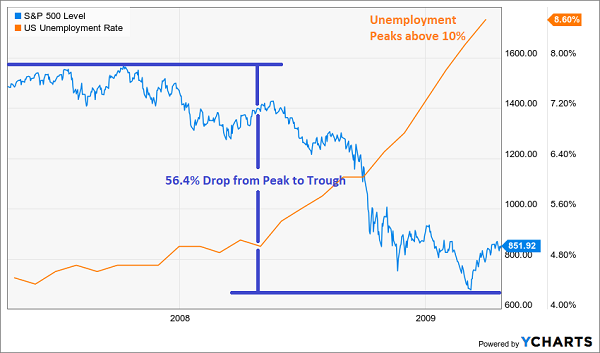 It was long. It was exhausting. And it took a serious toll on the economy and the stock market.

New claims for unemployment insurance have been mounting over the past several weeks. I’m sure you’ve seen the hockey stick chart that’s been going around showing the spike compared to the numbers going back to the late-1960s.

I’m not going to put that in here because you’ve all seen it too many times to count by now. But what it shows is that millions of Americans are already jobless.

And yet, the stock market is up nearly 30% off its lows, even as it becomes more and more apparent that we will not just fire back up the economy like some well-stored lawnmower. 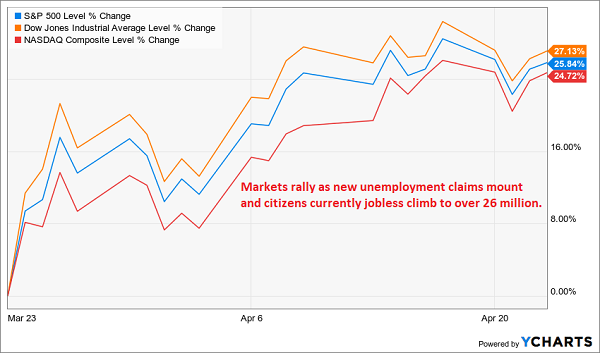 Will It Be Different This Time?

After refreshing my memory on how recessions always end, I’m more confident than ever that it’s not going to be “different this time.”

Sure, the Fed came in faster than in the Great Recession. And combined with Congress and the president, we’ve seen more money thrown at this problem than many of us can even imagine.

But they just can’t fight the reality that we’re staring down the barrel of a prolonged recession that’s shaping up to be worse than the one we got out of 10 years ago.

Remember that unemployment peaked at just above 10% after the Great Recession in 2010. And then consider that analysts are projecting it to hit 32% this year thanks to coronavirus and that we’re already at 20% (based on UI claims data released yesterday). 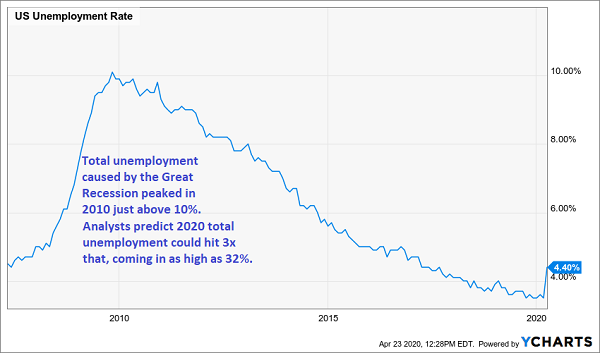 You think all of those unemployed workers are going to be out there spending money to save retail industries? Or taking lavish vacations to help the cruise and airline industries? My money’s on “no.” 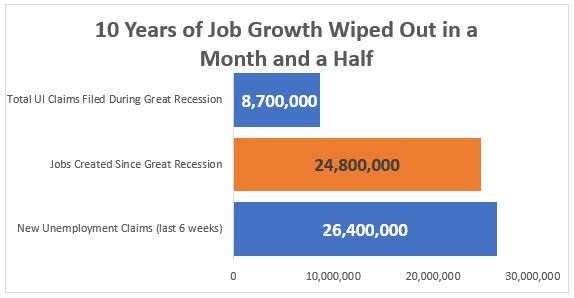 It took a decade to create all those jobs and only a month and a half to wipe them out. You think we can add back the 26.4 million we’ve already lost (plus however many we lose in the weeks ahead) in just a few months?

I kind of doubt it. And if you’re saying that a lot of those people can go back to work as soon as the economy opens back up, you’re not thinking about the ones whose companies didn’t survive or the ones who’ve already been laid off.

And trust me, as this shutdown continues, the next round of layoffs is going to hit those white-collar workers who’ve been able to get by these past six weeks working from home. The total number of jobs lost is going to keep climbing. And it’s going to take a long time to get them all back.

What Can You Do?

I hate to be all doom and gloom, but there’s just too much optimism out there. A vaccine is months away at the very best and years at the worst. Some countries are seeing second waves of the virus after reopening their economies. China has people who are still testing positive months after contracting the disease. Korea has had instances where people have recovered and then contracted it again.

The markets are only holding their ground because of the Fed and U.S. government support. But the politicians can’t agree on who should and shouldn’t get help (what a surprise). And the Fed is quickly running out of ammunition to keep up the fight.

So, you can take my advice and use the strength to take some money off the table. You can set your portfolio up in defensive position for the months ahead.

And, to get some more proverbial dry powder together, you can use my colleague’s low-risk, high-reward strategy to secure some pretty impressive cash payouts.

You’re all probably familiar with my co-editor at The Wealth Advisory, Brit Ryle. But you may not know that Brit is also an expert trader. He runs several stock and options trading services through our parent company Angel Publishing. They’re pretty high tier — lots of trades and lots of profits, with a lot more technical stuff involved.

But his premier service, the top-shelf if you will, is without a doubt Real Income Trader.

I say this because Brit’s devised a way to get the same strategies that we used to guarantee our profits at big banks like Morgan Stanley into the hands of regular investors.

I like to say that he’s taken the power of Wall Street and put it into the hands of Main Street.

Using his strategy, investors are able to claim instant cash payments in the stock market. And they’re able to do it all without taking on any extra risk.

At first, it sounds a little complicated (and maybe even too good to be true). But I’ve seen this strategy in action, and it’s the real deal. Not only is it wildly profitable in literally any market (up, down, or flat), but it's incredibly easy to execute, even for someone with little to no experience at all.

And you don’t have to just take my word for it, either. Because Brit has agreed to do a presentation for a limited number of interested investors.

He’ll break down the strategy, explain how to use it, and even show you how to claim your own instant cash payouts with a live, real-life demonstration.

He’ll be sharing all that knowledge next week. But, as I said, there are a limited number of seats available. We’ve set aside some for Brit’s loyal Wealth Daily readers, but the list is already filling up.

If you want a seat at the table, you’re going to need to reserve it as soon as possible. In fact, with the response we’ve already seen, we may have to shut the list and start putting folks on a secondary “waitlist” by the weekend.

So, if you want to learn how to claim instant cash payouts, reserve your seat today. There’s no cost, no obligation, and no tricks.

Click here to secure your spot and by this time next week, you’ll be on your way to collecting instant cash payouts as big as $1,800, again and again and again.

I’ll be there with Brit helping break down the strategy for you. And I look forward to seeing as many of your names as possible in the audience.