The Hindenburg Omen: Oh, the Humanity!

A Chart Pattern Worse than the Omen

Lighter than air, the Hindenburg floated to its destiny over the Lakehurst Naval Air Station.

In virtually an instant, the picture that has since been burned into everyone’s brain began to unfold...

Suddenly bursting into flames, the great ship was completely destroyed.

And ever since that fateful day, the mere mention of the Hindenburg has carried with it a certain sense of the ominous, portending disaster.

That’s why, when I came across a reference to an obscure technical pattern known as The Hindenburg Omen on the blog Zero Hedge, my interest was piqued.

To top it off, I stumbled upon this particular article on Friday the 13th...

First identified by Jim Miekka, the Omen plays on the logic that the bulls and the bears can’t possibly both be right — which, in an odd way, describes where the markets are stuck right now.

This scenario is triggered by the divergence of the number of stocks making new highs versus those making new lows.

In other words, the absence of uniformity in sentiment creates the condition of the Omen.

The traditional definition of a Hindenburg Omen has five criteria (per Wikipedia):

Meeting these conditions, the occurrence of all five criteria on one day is often referred to as an unconfirmed Hindenburg Omen.

According to the data, this resulted in an unconfirmed Omen last Thursday — a mere one day after nearly triggering it the day before.

On Wednesday, only 67 stocks hit new lows as opposed to the required 69.

Ever since then, the Street has been abuzz with references to fiery crashes.

So what does it all mean?

Probably not much on the face of it... Prior Omens have come and gone without causing much of a market stir.

But looking back at the historical data, the technical signal has indeed been present in every NYSE crash since 1985.

That being said, here’s the rest of the historical breakdown in the aftermath of a confirmed Hindenburg Omen:

And here’s another stat that might just give you goose bumps... According to Barron’s, the Hindenburg Omen appeared in June 2008 when the Dow was trading at 11800 — a mere three months before the big September crash.

A chart pattern worse than the Omen

Whether obscure or not, this is one signal to watch — especially if Thursday’s occurrence is confirmed. After all, the gulf between the bulls and bears has never been wider.

And while I know that all of that sounds a bit crazy, it does seem to jive with the a chart that I have been watching for months now.

It’s the weekly chart of the Dow, and it's more worrisome than any Omen. Here's why...

The chart seems to be forming the final leg of the head and shoulders top we have been warning Wealth Advisory subscribers about for months now. It's one of the reasons we were selling stocks as the DOW revisited the 10700 level. 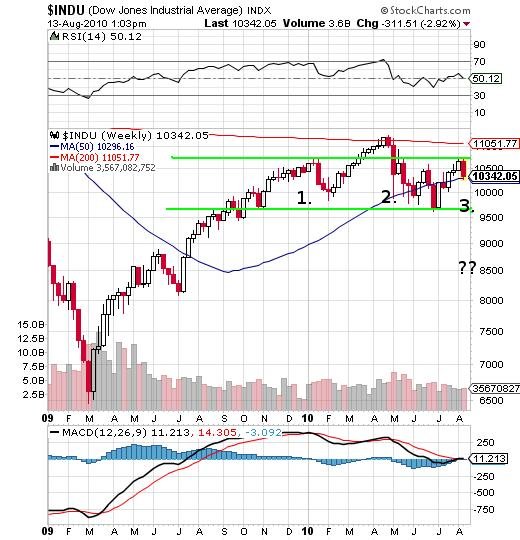 So what does a classic head and shoulders top look like?

As depicted above, the classic head and shoulders top looks like a human head with shoulders on either side of the head. It's what's known as a topping pattern.

The key to the pattern, however, is the neckline formed by the previous support, since the pattern is complete when the neck line is broken.

Calculating the downside target then is just a simple matter of the math. To figure it out, you subtract the high of the head (roughly 11200) by its distance to the neckline of 9700.

That gives you a figure of 1500 points. You then subtract that same 1500 from the 9700 neckline to arrive at your new downside target.

Hindenburg Omen aside, what this all means is if completed, the DOW would fall as low as 8200.

Food for thought as we head into September and October.

P.S. If you are ready to build wealth without worry, I have built a five-stock portfolio of dividend-paying companies that will perform in any market. In fact my subscribers have earned 168% gains over the last two years using this system. Not bad for a bear market.